Quick question: How many denominations of U.S. gold coins can you name?

Since the Coinage Act of 1792 established the U.S. Mint, it has produced 20 official denominations of U.S. coins. And would you believe half of them were gold?

Granted, it took a few years for the mint to get production up and running. But since 1795, the U.S. Mint has struck no less than ten different denominations of gold coins. Some of these may be unfamiliar to many collectors. So let’s take a brief look at them now.

And as we do, see how many you recognize! 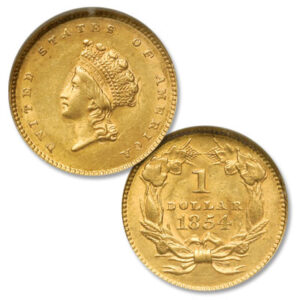 Born of the California gold rush, $1 gold coins were authorized by the Act of March 3, 1849. The smallest diameter U.S. coins, they initially measured just 13 mm before being bumped up to 15 mm – which is still smaller than a half dime. But don’t let their size fool you. These tiny gold coins are highly sought by collectors for their history, rarity and value.

Our second type is much better known. Long before the U.S. Mint produced gold dollars, it produced $2.50 gold coins. In fact, they were among the nation’s first official coins, authorized by the Coinage Act of 1792. They are known as “quarter eagles” because their face value is one-fourth that of a $10 gold eagle.

The Mint Act of February 21, 1853 added yet another denomination of official U.S. gold coins: the $3 gold piece. At this point, we already had gold coins in both $1 and $2.50 denominations. So why did they feel the need to mint $3 gold coins? 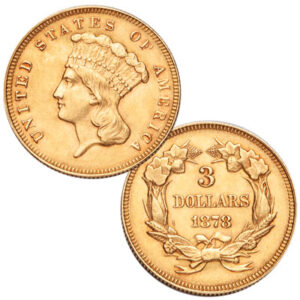 Its creators likely envisioned the $3 gold piece as an easy way for the public to purchase sheets of 3¢ stamps and rolls of 3¢ silver trimes. But $3 gold coins never really caught on with the public.

Although the mint struck $3 gold pieces for 36 years, it saw just one design and most years saw relatively small mintages. As a result, the series has many rarities. But counterfeits are known to exist, so those collecting should only buy from a reputable dealer and authenticate any suspicious pieces. 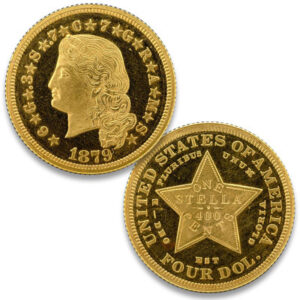 Introduced in 1879, the $4 gold piece was named the “Stella” after the Latin word for star – a fitting name, given the large five-pointed star on the coin’s reverse. It was created with a lofty purpose – to compete globally with French, Spanish and other coinage.

However, those dreams were shattered when Congress killed the denomination before it was ever actually authorized.

As a result, $4 gold Stellas were minted for just two years, and none of the coins were issued for circulation. Only pattern Proofs were produced, in two designs: Flowing Hair and Coiled Hair. Mintage records are unclear. But it’s believed just 15 originals and 425 “restrikes” were produced.

Despite this, the denomination is considered an official series of U.S. gold coins. Stellas have always proven popular among collectors. But due to their rarity, they can be quite costly and usually collected as type coins.

$5 Half Eagles and Commemoratives 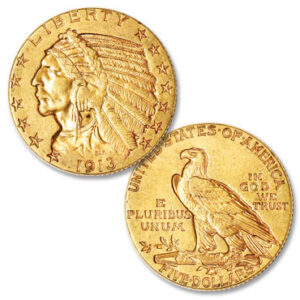 However, after 135 years, production of half eagles ended in 1930. And from 1933-1974, private ownership of gold was actually outlawed. But that didn’t spell the end of U.S. gold coins – or the $5 gold denomination. 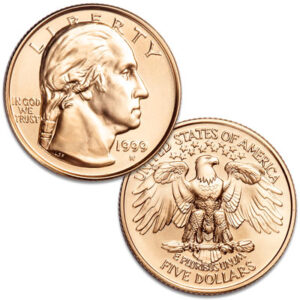 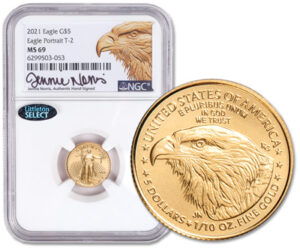 Authorized by the Coinage Act of 1792, the gold eagle was originally the largest denomination U.S. coin. The mint struck these $10 gold coins from 1795-1933, and they remain popular among collectors. The series saw three types: Capped Bust, Liberty Head and Indian Head.

Gold eagles are far from the only official $10 gold coins, however. 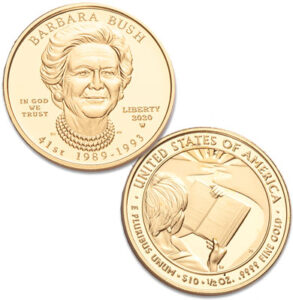 Since 2007, the mint has produced gold $10 First Spouse coins. Introduced alongside Presidential dollars, the First Spouse series honors our nation’s first ladies. And like the American Buffalo series, the coins are minted in 99.99% pure gold.

The mint also issued 99.99% pure gold $10 American Liberty bullion coins in 2018. And we’ll talk more about that series in a moment. But first, we need to cover… 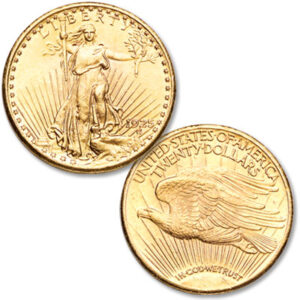 Without a doubt, gold $20 double eagles are among the most highly desired U.S. coins. And not just for their hefty 1 oz. gold content.

Double eagles are also prized for their rich history and designs. Which, of course, are perfectly showcased by their large size. At 34 mm in diameter, they are larger than a half dollar, and nearly the size of a silver dollar. 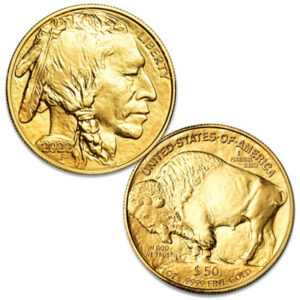 Per mint tradition with bullion coins, each series’ design spans each size and denomination. Which means $5, $10, $25 and $50 gold American Eagles (or gold American Buffaloes) all share the same design.

This is nice for a couple of reasons. First, it offers alternatives to meet different budgets. And second, it presents yet another way to collect these lustrous coins.

Introduced in 1986, the gold American Eagle bears Augustus Saint-Gaudens’ beloved double eagle obverse design. Its original reverse featured a family of eagles. But in 2021, it received a new reverse depicting a proud bald eagle close up.

As its name suggests, the American Buffalo doesn’t depict an eagle at all. Instead, it features James Earle Fraser’s iconic Indian Head obverse and Buffalo reverse designs that graced the nickels of 1913-1938.

The last – and latest – denomination of U.S. gold coins is certainly not the least. In 2015, the U.S. Mint struck the first $100 American Liberty gold coins.

Minted in 1 oz. of 99.99% pure gold, like the American Buffaloes and First Spouse gold coins, they are the highest denomination U.S. coins issued to date. But that’s far from the only thing that makes this series unique.

American Liberty gold coins are also struck in high relief. And unlike other U.S. bullion coins, they are intended to be issued biennially, with a new design issued every two years. In odd-numbered years, a new 1 oz. $100 coin design is released – with a 1/10 oz. $10 coin of the same design issued the following year.

Finally, unlike the other gold coins we’ve covered, American Liberty gold coins were not created (or rejected) by Act of Congress. Rather, they were authorized by the Secretary of the Treasury by authority granted under 31 U.S.C. Section 5112 (i)(4)(C).

Which are your favorite gold coins?

Now that we’ve covered all ten denominations of U.S. gold coins, how many did you recognize? Do you have any favorite denominations, types or designs? If so, we’d love to hear about them in the comments below!

And if you’re looking to add U.S. gold coins to your collection, be sure to check out Littleton’s extensive online inventory. Just go to: LittletonCoin.com/shop/gold-type-coins\