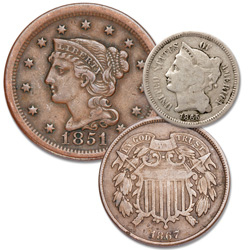 Quick question: How many U.S. coin denominations can you name?

Most people can name five – the cent, nickel, dime, quarter and half dollar. Six, if they remember the many dollar coins, like gold dollars, Silver American Eagles, Morgans, Ikes, Susie B.’s and U.S. Innovation dollars.

But did you know…

There have been at least
20 official U.S. Denominations

In addition to those listed above, the U.S. Mint has also produced a number of other denominations throughout its history.

From 1854-1889, it struck $3 Indian Princess gold pieces. And from 1879-1880, it also minted the short-lived $4 gold piece. Which was nicknamed the Stella (Latin for “star”) after the five-pointed star featured prominently on its reverse. 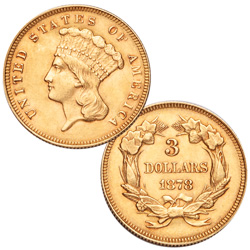 Of course, if we include bullion coins, we also have to count the various gold, platinum and palladium denominations. Including – but not limited to – $25 Platinum American Eagles, $50 gold American Buffaloes and $100 gold American Liberty coins.

So far, that’s a total of 15 official denominations – each with a fascinating history all its own.

But those are stories for other days. Today, we’re going to take a closer look at five often-overlooked and forgotten U.S. denominations. Starting with…

Half Cents were among the first U.S. coins

If you’ve been coin collecting for a while, chances are you’ve heard of half cents. After all, they were among the earliest official American coins. And they hold the distinction of being the smallest U.S. coin denomination.

Authorized under The Coinage Act of April 2, 1792, these copper coins were never granted legal tender status. That meant half cents could be refused as payment. But it didn’t stop the mint from producing them until shortly before the Civil War.

Today, half cents can be hard to find even for savvy collectors. So be sure to keep an eye on Littleton’s inventory of half cents here.

Congress first considered authorizing a 2¢ coin in 1806. But the idea was quickly abandoned when U.S. Mint director Robert Patterson demonstrated how easy it would be to substitute brass buttons for the coins.

Nevertheless, the idea lingered on.

In 1836, a provision to introduce the denomination was considered, then dropped – but not before pattern coins were produced. The following year, it was introduced again. This time, it passed. And on April 22, 1864, the two cent piece was officially born.

From a practical standpoint, it was an utter failure. Two cent pieces never gained widespread public acceptance or use. And as a result, each year fewer coins were struck. In 1873, after just ten years, the denomination was retired.

However, from a numismatic view, the two cent piece played an important role in U.S. coinage. It was the first U.S. coin to bear the motto in god we trust, which is shown on the coin’s obverse in a banner above a Union Shield.

In fact, you might say they were a little too accepted.

You see, three cent pieces were originally struck in silver, which makes them the smallest-denomination silver U.S. coin. And as the Civil War loomed, people hoarded any silver they could get their hands on. Especially silver trimes. 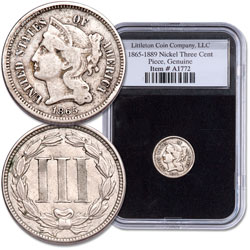 3¢ pieces were struck in both silver and nickel (nickel shown)

So in 1865, a nickel three cent piece was also introduced. The mint actually produced both silver and nickel types for a time. So it’s fortunate their designs were slightly different.

Silver trimes were struck from 1851-1873, and saw three varieties. Each bears a six-pointed star on the obverse, with a stylized “C” surrounding a Roman numeral III on the reverse for the denomination.

Struck from 1865-1889, nickel three cent pieces depict Liberty facing left on the obverse. Their reverse is similar to that on their silver counterparts, showing a Roman numeral III inside a laurel wreath.

Both silver and nickel types of this unusual denomination remain popular favorites among coin collecting enthusiasts. And you’ll find a variety to choose from in Littleton’s inventory of three cent pieces here.

Silver half dimes were replaced
by nickel five cent pieces

The half dime is another original – but often forgotten – U.S. coin denomination. As the name indicates, the half dime’s value is half of a dime’s, or five cents. And its story begins in 1792, when President George Washington authorized U.S. coinage to proceed with some 1,500 silver “half dismes” struck for circulation under contract.

Two years later, in 1794, the U.S. Mint began producing its own silver half dimes, and continued to produce them through 1873. In 1874, they were retired in favor of the nickel five cent coins introduced in 1866 due to silver hoarding.

The short-lived twenty cent piece might seem like an odd denomination today – especially since we’ve had the quarter dollar since 1795. But it actually makes sense. After all, U.S. coinage is based on a decimal system.

That’s why the U.S. Mint had high hopes when it introduced the new 20¢ denomination in 1875. But the coins never caught on with the public. 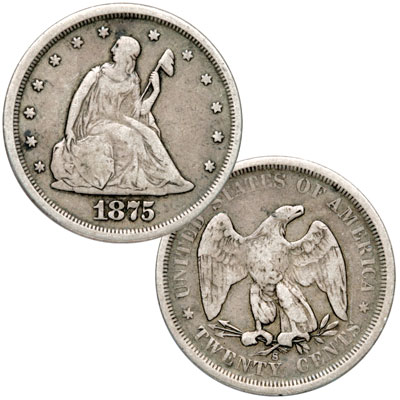 And it’s easy to see why. The obverse and reverse designs of twenty cent pieces were too similar to those on quarters. Even worse, the two coins were nearly the same size – a mistake the mint would repeat a century later with Anthony dollars.

In the end, people found it easier to simply use two dimes. So twenty cent pieces were struck for circulation for just two years. The mint produced a limited number of Proof issues in 1877 and 1878. But after that, the denomination was retired.

All told, just over 1.3 million twenty cent pieces were produced. Making them one of coin collecting’s exciting challenges to acquire for your collection.

Do you have these obsolete classics?

Of the obsolete classics we’ve covered today, how many do you have in your collection? Do you have any half cents, 2¢ or 3¢ pieces? How about half dimes or twenty cent pieces?

Or maybe you have stories of these – or other obsolete coinage – you’d care to share. If so, we’d love to hear them. Let us know in the comments below!

PS: Want to add these and other U.S. coin types to your collection?

There are many ways to approach coin collecting. You can go to coin shops and coin shows. You can check bank rolls and pocket change. And, of course, you can shop online. You’ll find a wide selection of coins and currency in Littleton’s online store. 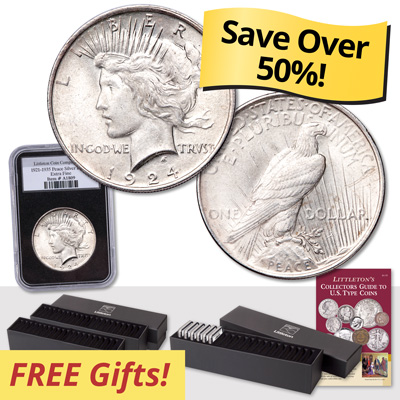 But one of the easiest and best ways to enjoy your coin collecting hobby is through Littleton’s many collector clubs. Because they literally bring the coin shop to you.

As a club member, each month you receive a selection of coins hand-picked just for you. There’s never any obligation to purchase. And you always have up to 15 days to examine each coin and decide if you want to add it to your collection.

One of my favorite Littleton clubs is the U.S. Type Coin Collection Club.

This exciting service features 65 different types of gold, silver, nickel, bronze and clad U.S. coins spanning over 175 years of American history. Including all five of the obsolete & forgotten denominations we’ve covered above.

Want to learn more? Click here to try it today!