Collecting coins by the roll has always offered a “hoarding appeal.” If owning a single desirable coin is fun, why not own a whole roll of them! But roll collecting has been popular for another reason in recent years. The U.S. Mint’s heavy workload, including quarters and dollars with frequently changing designs, has yielded quite a number of interesting error coins. So searching through rolls of modern U.S. coins for the most famous errors is an exciting and rewarding endeavor!

The who, what and why of coin rolls

Today, what you might find in rolls of U.S. coins depends largely on who assembled the rolls, what coins are included and why the rolls were assembled:

Collecting rolls of the same issue 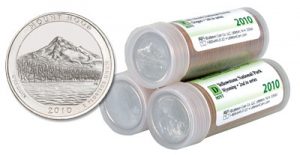 If a roll contains coins of the same denomination, design, composition and date, collectors may hope that the coins will be worth more in the future. This could be from scarcity, collector importance or a rise in the value of the metal in the coins…

When 90% silver coins were coming to an end in 1964, collectors stashed away rolls of the 90% silver coins from banks, coin dealers and other sources. The primary reason was the value of the silver. But these “hoarders” were also guessing that 90% silver Roosevelt dimes and 90% silver Washington quarters would have greater interest to collectors than the copper-nickel coins that replaced them.

When bronze cents, which were 90% copper, were replaced with copper-coated zinc cents in 1982, collectors stashed away rolls of bronze cents which each contain about 2¢ worth of copper today!

If a roll of coins was packaged without regard for date, mint mark, design or metal content (such as those assembled by banks or stores), collectors enjoy searching through the rolls for several reasons. They may find obsolete designs, scarcer issues, major errors or metals worth more than face value. 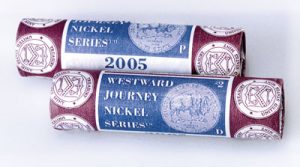 Many precious finds have been made in mixed-date rolls. These include key-date Lincoln Wheat cents, scarce Buffalo nickels and all kinds of 90% silver coins. Some 1878-1921 Morgan dollars have been found in Eisenhower dollar rolls! One searcher even came across an 1861-O Seated Liberty silver half dollar in a roll of Kennedy halves. This Civil War-era coin was an especially good find because die traits showed it was struck while the New Orleans Mint was under Confederate control!

Roll collecting gets a modern boost 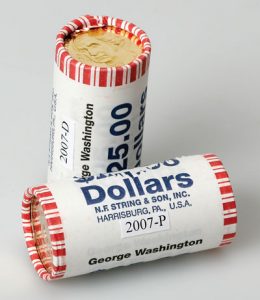 A new era in U.S. coinage began in 1999 with the Statehood quarters, followed by the ongoing National Park quarters. Each design was struck for about ten weeks and then never again. The Presidential dollars of 2007-2016 were minted for only about three months each. And Native American dollars of 2009 to date bear one-year-only reverse designs. Plus, since 2012 both dollar series have been minted only in limited numbers for collectors.

Some of these briefly struck and low-mintage coins, needed for complete series sets, have already become tough to find. So collectors have a new reason to put away Uncirculated rolls of these modern quarters and dollars!

But the demanding mint schedule with frequent design changes has also yielded prized error coins. Many of these have been found by searching through rolls from the mint. Here are just a few of the best-known error quarters and dollars:

Getting coin rolls from your bank

You can usually request bank-wrapped rolls or customer-wrapped rolls of coins at banks where you have an account. “Coin roll hunters” build friendships with tellers at their banks, and may open accounts at other banks. This gives them access to coin rolls from more than one source. You’ll get 50 coins in each roll of pennies or dimes and 40 coins in a nickel or quarter roll. You’ll get 25 coins in a roll of small-size dollars, and 20 coins in a roll of half dollars. You can also ask for, or order for face value, full boxes that contain 50 rolls of the same issues.

Whether you hope to find scarce dates, older designs or bygone metal content, you’ll enjoy the thrill of the search. And you just might find a prized coin or two! So best of luck with your coin roll hunting!