Most coin collectors know the woman whose image graces the Native American dollar is none other than Sacagawea. Which makes sense. After all, the coins were officially called Sacagawea dollars when the series was first introduced in 2000.

And it’s a fitting tribute, because Sacagawea might just be the most famous of all Native American women. 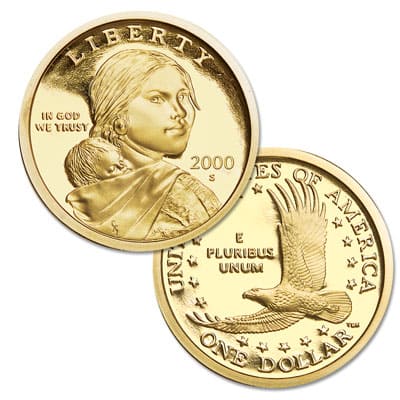 While still a teenager, Sacagawea served as a guide and interpreter for Lewis & Clark’s epic expedition to explore the newly acquired Louisiana Purchase territory and seek the fabled “Northwest Passage” to the Pacific Ocean.

During their travels, Sacagawea saved scientific equipment, irreplaceable journals and other supplies when one of the boats nearly capsized. She also used her intimate knowledge of the terrain to lead the group in the right direction. As well as to identify berries, plants and roots that could be used for food and medicine.

And, of course, she helped the group communicate and negotiate with the Native Americans they encountered. Including her own Shoshone people.

However, despite her age, Sacagawea wasn’t the youngest member of Lewis & Clark’s expedition. That honor goes to her son – who also appears on the obverse of Native American and Sacagawea dollars.

They used the fort as winter quarters. And spent the next several months chronicling their experiences… preparing specimens for delivery back to Washington, D.C.… and, of course, preparing for the next stage of their journey. 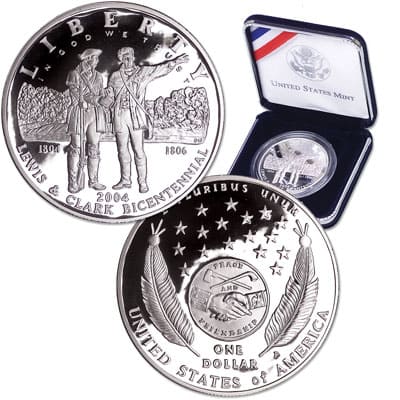 It was during this time Lewis and Clark were approached by French-Canadian trapper and free trader Toussaint Charbonneau.

They interviewed Charbonneau for the position of translator and guide. As the story goes, they weren’t overly impressed. But they realized one of Charbonneau’s two wives might prove invaluable to their expedition.

The daughter of a prominent Shoshone chief, Sacagawea was captured by a Hidatsa tribe raiding party when she was 12. Some three or four years later, they sold or traded her to Charbonneau.

Lewis and Clark knew they would need to trade with Shoshone for horses, so they offered Toussaint the position – as long as Sacagawea also came along.

The only problem was, Sacagawea was pregnant. 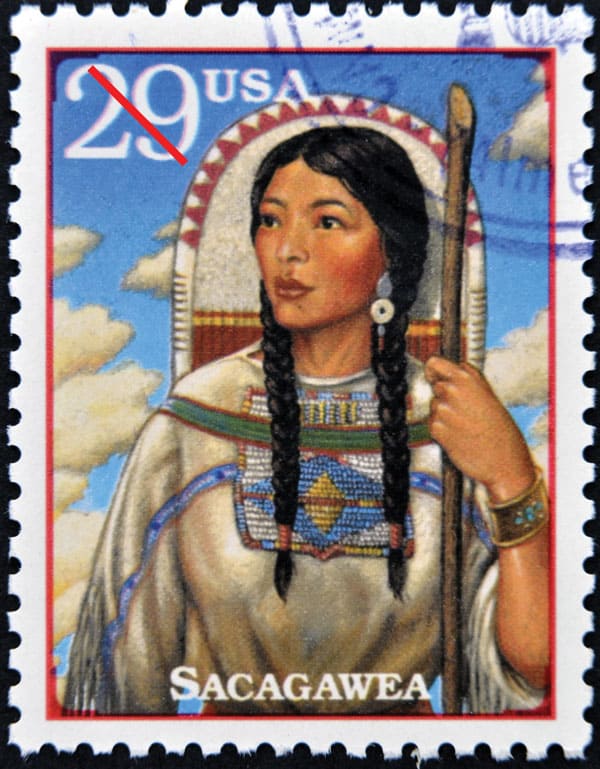 Less than two months before the expedition’s planned departure, Sacagawea went into labor. It was her first child, and by accounts a difficult labor. Clark, who handled the medical needs of his expedition, handled the delivery.

On February 11, 1805, Jean Baptiste Charbonneau was born. And it wasn’t just his parents who would grow to be famous.

Jean Baptiste led an extraordinary life right from the start. He was delivered by none other than Capt. William Clark, co-leader of the Lewis & Clark expedition. And just 55 days later, the group left to continue their quest for the Northwest Passage.

Sacagawea carried her young child throughout the long journey to the Pacific Ocean and back. So it’s appropriate Sacagawea dollars depict her holding young Jean Baptiste… especially since both Jean Baptiste Charbonneau and his mother proved to be powerful protectors for the group.

The Native Americans the expedition encountered could not imagine a war party bringing along a woman and her child. So while the group was well armed, their curiosity was aroused – and they believed its claims of peaceful intentions.

As a result, not a single member of the Corps of Discovery was lost to hostile natives.

Jean Baptiste’s life following the successful completion of the Lewis & Clark expedition was just as interesting – and maybe even more so.

Over the course of their 16-month journey, Capt. William Clark grew fond of Sacagawea and her family, who had trekked alongside him for some 5,000 miles from the Missouri River to the Pacific Ocean and back. Especially little Jean Baptiste. 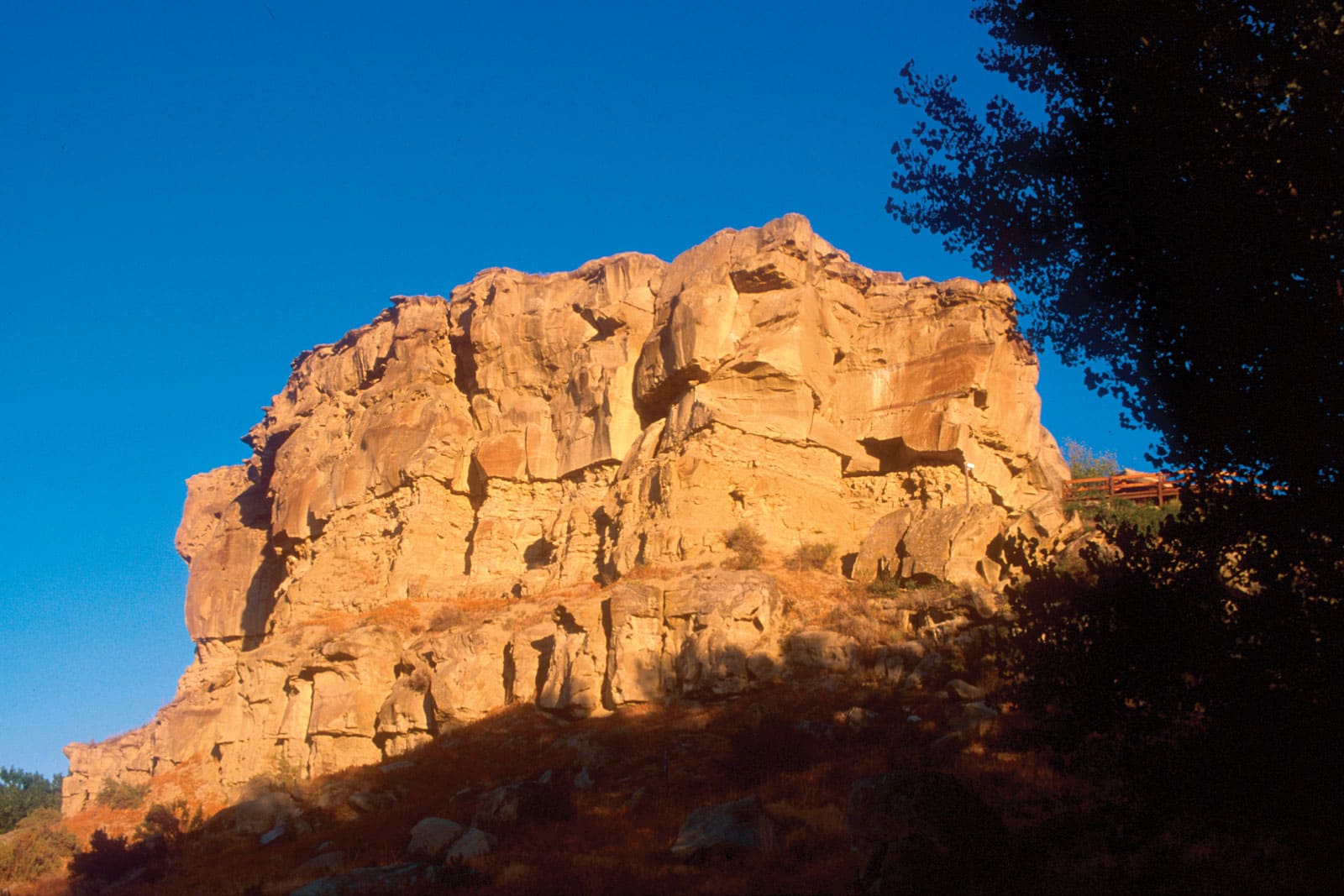 Clark nicknamed the boy “Pomp” (sometimes “Pompey”), a name Jean Baptiste used for many years. He even named a landmark after him – Pompey’s Tower, now Pompey’s Pillar National Monument in Yellowstone County, Montana.

In fact, Clark grew so fond of Pomp, he offered to see to his education and raise the boy as if he were his own child. In 1809, Toussaint and Sacagawea took Clark up on his offer. They traveled to St. Louis to have Jean Baptiste baptized, then left their son in Clark’s care.

Sadly, this may have been the last time Jean Baptiste saw his mother, as many historians believe Sacagawea died in December of 1812.

Clark’s home was by accounts akin to a private museum – an excellent learning environment for a growing boy. But Pomp was not to be home schooled. Clark spared no expense in keeping his word, enrolling Pomp into the prestigious (and expensive) St. Louis Academy.

His education complete, Pomp began working for the Missouri Fur Company in 1821. In June of 1823, he met Duke Friedrich Paul Wilhelm of Wurttemberg. The duke was conducting an expedition with none other than Toussaint Charbonneau – Jean Baptiste’s own father – as his guide.

Pomp made quite an impression on the visiting duke.

In October of 1823, the duke invited Pomp to accompany him back to Europe. Pomp spent six years living at the duke’s palace, during which he retired the nickname in favor of his given name.

Jean Baptiste was known for his pleasant demeanor, and impressed many with the quality of his education. His penmanship was excellent, as were his language skills. By the time he left Europe, he spoke fluent English, French, German and Spanish in addition to several Native American languages.

Of course, he didn’t spend all his time at court.

The duke was an avid explorer, ethnographer and naturalist. And during his stay, Jean Baptiste joined him on many adventures, from hunting in the Black Forest to expeditions in North Africa.

Return to America… and gold!

By 1829, Jean Baptiste was ready to return home to America. He settled in Missouri, and – like his father before him – took up a life of adventure. 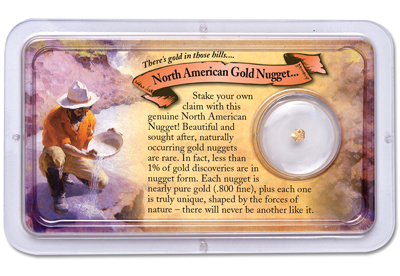 He spent the next 17 years working for the American and Rocky Mountain Fur Companies, serving as a guide, chief hunter and trader.

Then, in 1846, he served as guide to the Mormon Battalion during the Mexican-American War. And in 1847, he was appointed mayor of Mission San Luis Rey de Francia – a post he resigned the following year.

When gold was discovered in California, Jean Baptiste was among the first to seek its riches. He spent more than a decade successfully mining and prospecting the Placer County region, near present-day Auburn.

Eventually, as gold became harder to find, he took a job managing the Orleans Hotel. But the spirit of adventure was still strong in him. So when gold was discovered in Montana, Jean Baptiste was off again.

He left Auburn for Montana in 1866. But as fate would have it, he caught a chill from a frigid water crossing followed by bitter April wind and rains. By the time he was brought to the nearest shelter at Inskip’s station – some 25 miles away – his condition was significantly worse.

In addition to a high fever, Jean Baptiste had contracted pneumonia.

The death of Jean Baptiste 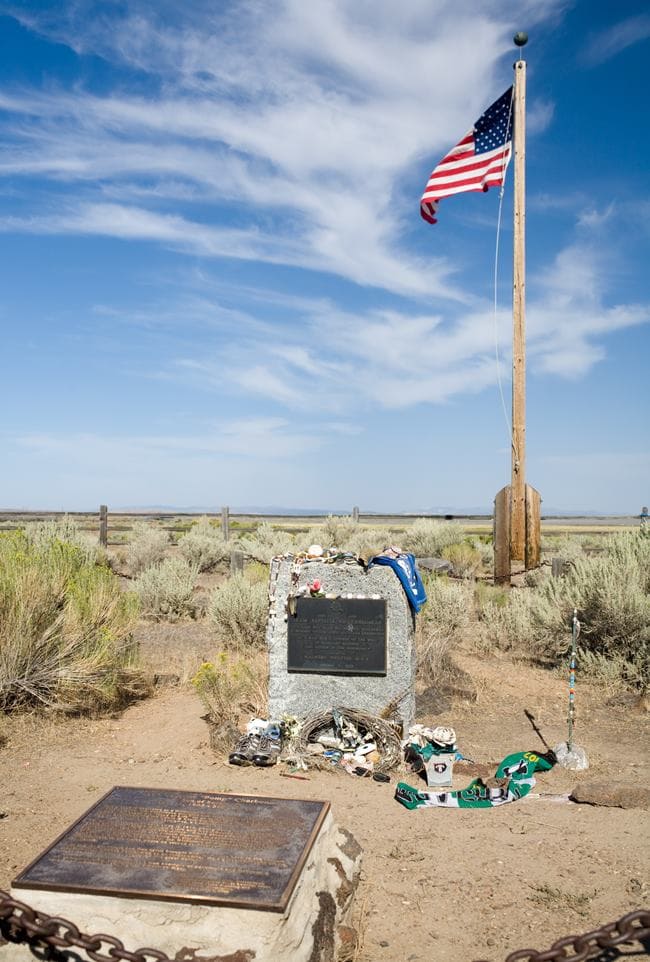 He died as close as 250 miles from the birthplace of his famous mother. And while nowhere near as famous, the boy once nicknamed Pomp had lived a truly remarkable life in his own right.

The son of Sacagawea and Toussaint Charbonneau – and adopted son of Capt. William Clark – he had been a friend and companion to European royalty. He worked as a guide, trapper and mountain man… a gold miner and prospector… a hotel manager and even a mayor.

And from his earliest days, earned his place in the annals of history as the youngest member of the legendary Lewis & Clark expedition.

Jean Baptiste was laid to rest at the mouth of Cow Creek near present-day Danner, Oregon. For nearly a century, he was lost to history. But his grave was rediscovered in the 1960s, and registered as a National Historic Place on March 17, 1973.

It’s a fitting tribute to an amazing life.

But perhaps the best honor of all is his depiction at the start of his most famous journey, in the arms of his mother on the obverse of Native American and Sacagawea dollars.

This article originally included a photograph credited as being Jean Baptiste Charbonneau, but was actually of Theodore Roosevelt. Thank you to our readers who pointed out this error. The article has been updated to remove the image and caption.