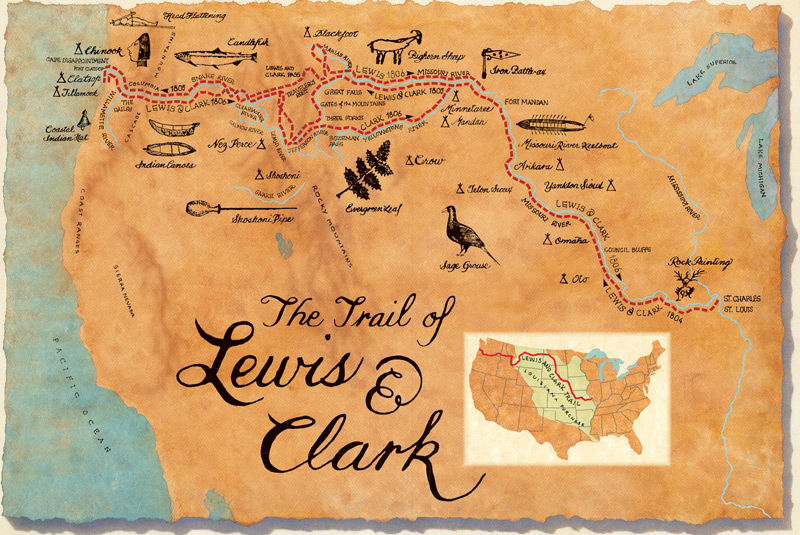 Meriwether Lewis and William Clark had those skills, plus a few good men, when they set out to explore the natural resources of the Louisiana Purchase – the famous 1803 real estate deal with France that nearly doubled the size of the young United States. Plus, the pair of military men also were tasked by President Thomas Jefferson to find a much-hoped-for maritime route to the Orient. European navigators had been looking for one since the 15th century. They called it the Northwest Passage.

On the 200th anniversary of this famous 1804 expedition up the Missouri River and then west by land and canoe, the U.S. Mint launched a celebratory four-coin, six-design series. It was called Westward Journey. Let’s take a look at them.

In 2004, the mint paid homage to the original Indian Peace Medal design President Jefferson commissioned for the expedition. The medals were presented to Native American chiefs as tokens of goodwill at treaty signings and other important gatherings where diplomacy was needed.

The refreshed reverse design featured two hands clasped in friendship. One showed a military uniform cuff, symbolizing the American government. The other featured a silver band adorned with beads and a stylized American eagle representing Native Americans. According to the diaries kept by Lewis and Clark, they met 50 Native American tribes on their journey.

Also in 2004, the mint released a reverse design of the keelboat used by the Corps of Discovery – the formal name given to the U.S. Army unit headed by Lewis and Clark. The vessel was christened Discovery. Built to Lewis’s specifications, the versatile boat – seen in a sideview on the nickel’s reverse – was 55 feet long. It could be sailed, rowed, poled like a raft or towed from a riverbank. Captains Lewis and Clark, in full uniform, are seen in its bow.

By October 1804, the expedition had logged 1600 miles of river travel, reaching central North Dakota where the Native American Mandan Tribe maintained a trading center on the Upper Missouri River. The corps wintered there. 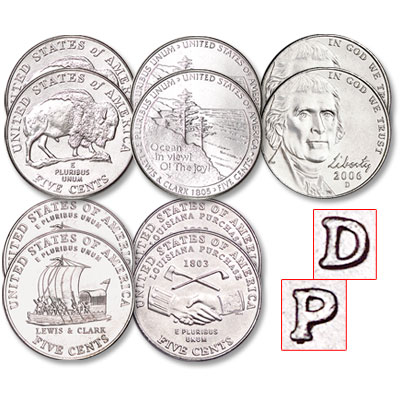 They also sent Discovery back down river to St. Louis. The keelboat was filled with plant and mineral specimens, plus magpies and at least one prairie dog. Their ultimate destination was Washington, D.C. and the recipient, President Jefferson.

If you are interesting in how to collect coins, the most basic criteria for assembling them are by the year and by mint mark. Check out this Uncirculated 10-coin P&D set ooo Westward Journey nickels from the Philadelphia “P” and Denver “D” Mints if you want a jump start! 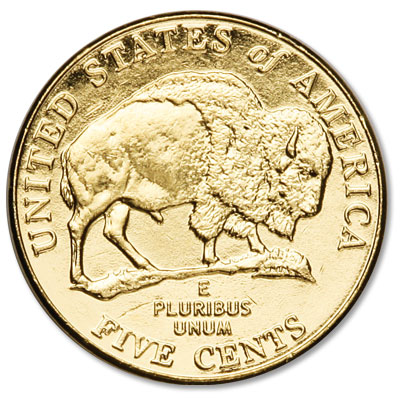 A ‘new’ look for the Bison

In 2005, the mint unveiled a new look for the American bison, herds of which the Lewis and Clark expedition encountered on their westward journey. Avid nickel collectors know the bison’s image was struck on the five cent’s reverse from 1913 to 1938, so the one-year-only design of 2005 makes quite an addition to a collection. Brilliant gold plating of the 2005 bison nickel enhances all its modern details.

The mint also debut a second reverse design in 2005. This one honored the hard-earned arrival at the Pacific Ocean. After crossing the Rocky Mountains, the expedition put canoes in the Snake River. They paddled south and ever westward. When they found the junction with the Columbia River, they followed that due west to the sea. Quoting from Clark’s diary on the nickel’s reverse, the exclamation capped the jubilant end of the epic journey.

It was November 1805, and the corps not only reached the sought-after ocean, but also a sober realization that a Northwest Passage by boat could not be realized. However, they did meet the 400-strong Native American Tribe known as the Clatsops who lived along the coast. On the north bank of where the Columbia River emptied into the Pacific, the corps built Fort Clatsop in what we recognize today as Astoria, OR. They spent the winter there before returning East. 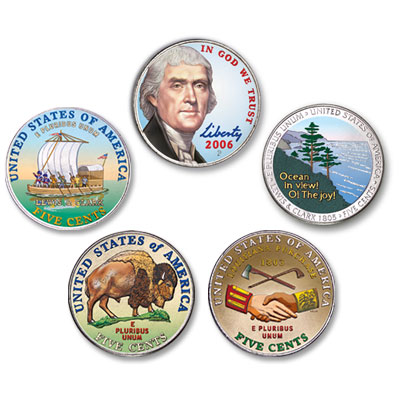 Littleton’s artists have exclusively enhanced the Westward Journey story. This compact set makes a great gift, as well as an eye-catching visual addition in a collection.

A New Look for Jefferson

In 2005, the mint revealed a dramatic make-over for our third president – his first obverse design change in 67 years! Facing right, the profile was made age-appropriate to the 83-year-old Jefferson by utilizing an 1800 portrait by Rembrandt Peale. The one-word inscription of “Liberty” on the coin is a facsimile of Jefferson’s own handwriting.

Following the Westward Journey series, the mint returned to the Monticello reverse. You can find out more about the Monticello motif in a Heads & Tails blog we posted in 2019.

Lewis and Clark were given a hero’s welcome when they returned in 1806 to Washington D.C. after their 8,000-mile round trip. You, however, can take this journey from the comfort of your home. If you’re interested in joining Littleton Coin’s  U.S. Nickel Collection club, check out this 15-nickel P&D set  that includes Littleton’s five colorized nickels. Who knows? It could be just the adventure for you or a youngster in your life!