It may have started with the Pilgrims. But growing from a single colonial feast into an annual federal holiday was a journey that took centuries, and was not without controversy…

This week, Americans will celebrate one of our nation’s oldest holidays. Each year, families gather on the fourth Thursday in November to eat and give thanks for the blessings in our lives. However, if you think you know the origin of this American holiday, you may be mistaken.

Because as Mark Twain said, truth is often stranger than fiction.

We’ve all heard the story of the first Thanksgiving. And for the most part, it’s true. The Pilgrims arrived on the Mayflower in 1620. They survived their first year with help from Squanto and the local Wampanoag tribe. And in November 1621, the Pilgrims and the Wampanoag gathered for three days of feasting, contests, games and giving thanks. 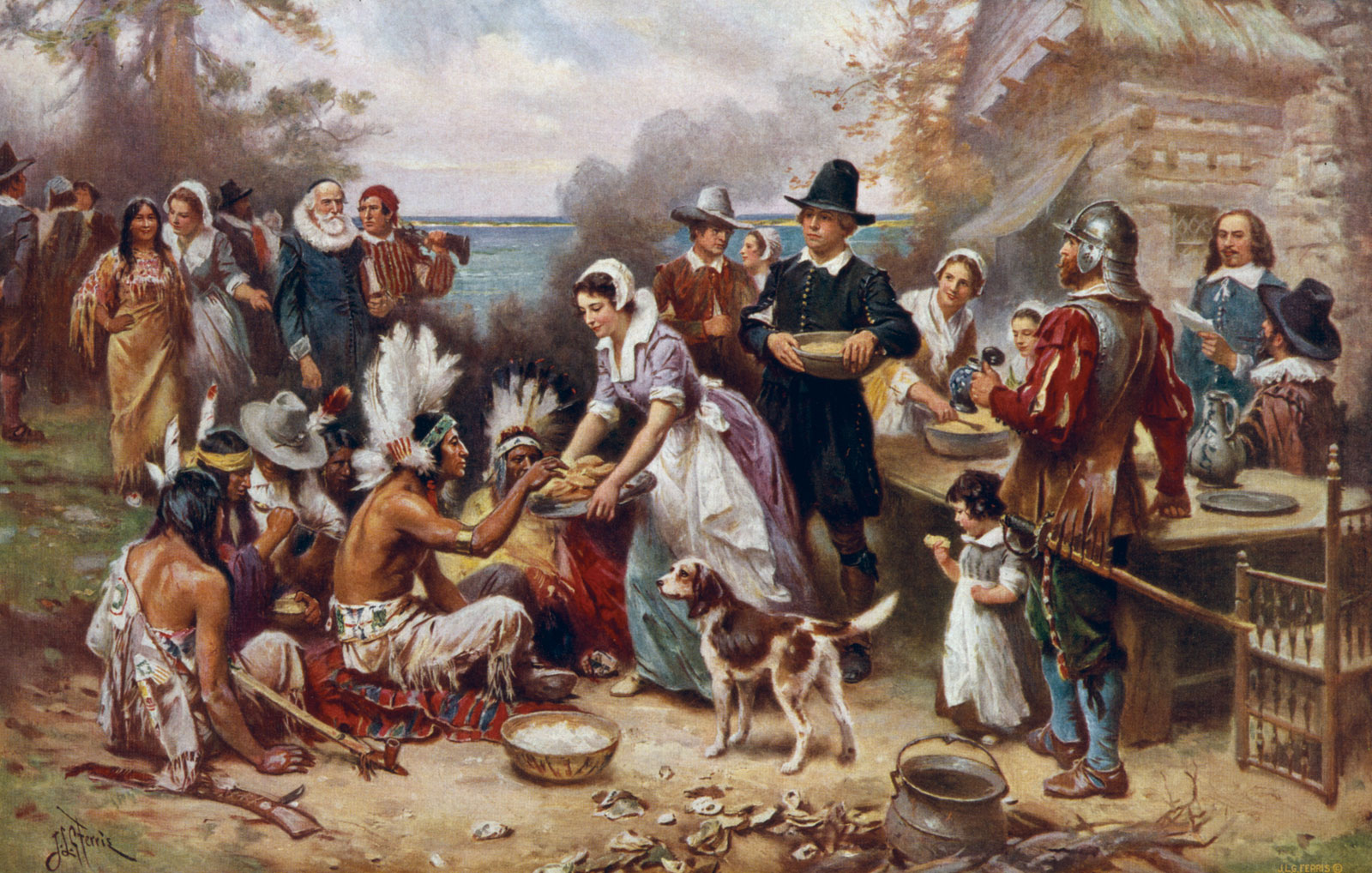 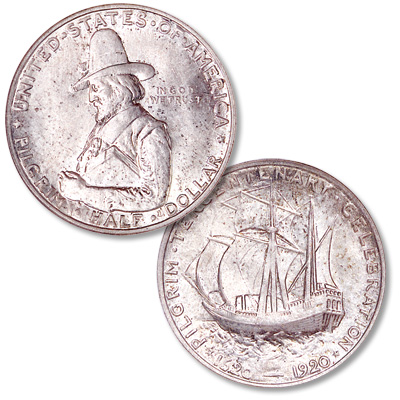 For paper money collectors, the 1902 $5 National Bank Note is a perfect choice. The back of the note bears Edwin White and Charles Burt’s dynamic vignette Landing of the Pilgrims.

Those who prefer coins might like the 1920 Pilgrim Tercentenary half dollar (right). Struck from 1920-1921, it commemorated the 300th anniversary of the Pilgrim’s landing. The coin’s obverse depicts Governor Bradford holding a Bible. The reverse features the Mayflower under sail. 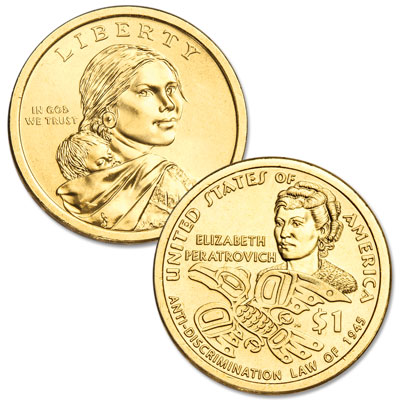 A more modern and direct tribute is the 2011 Native American dollar. This “golden” dollar honors the Wampanoag Treaty, which was signed on April 1, 1620 by Governor John Carver of the Plymouth Bay Colony and Massasoit of the Wampanoag. The coin’s reverse design depicts a peace pipe being exchanged between the two.

All three make great conversation pieces – especially around Thanksgiving. But did you know…

The Pilgrim’s Thanksgiving celebration wasn’t the first in the new world.

Nearly a century before the Pilgrims – in May of 1541 – Spanish explorer Francesco Vasquez de Coronado and 1,500 of his men celebrated a day of Thanksgiving in what is now the Texas panhandle.

On June 30, 1564, another Thanksgiving celebration was held by French Huguenot colonists near Jacksonville, Florida. And in the Spring of 1610, colonists in Jamestown, Virginia held Thanksgiving services when desperately needed supply ships arrived from England, saving the colony.

You can add this occasion to your collection as well, with the 2007 Jamestown Commemoratives struck in gold and silver for the 400th anniversary of the settlement’s founding.

It took more than two centuries for Thanksgiving to become the national holiday we celebrate today.

The story of the Pilgrim’s Thanksgiving celebration in 1621 is the most widely known. However, it still didn’t start our annual tradition. In fact, the concept of Thanksgiving as an annual holiday was a long time coming.

In the colonies, different areas held days of Thanksgiving at different times and for different reasons. Often, they were in appreciation of much-needed blessings – as when the Pilgrims held a second Thanksgiving in 1623 to celebrate the end of a drought. 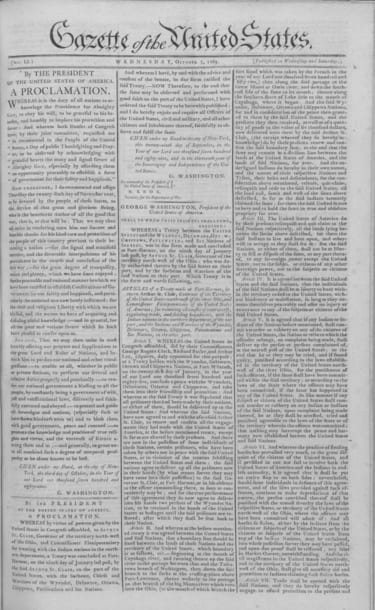 The Continental Congress declared a few Thanksgiving days during the American Revolution. And in 1789, President George Washington issued an official proclamation urging the states to set aside Thursday, November 25th as an official day of Thanksgiving and prayer throughout the new nation.

After Washington, presidents would occasionally issue Thanksgiving proclamations. But the dates – including the months – varied widely, and they continued to be isolated events.

If you’re creating a set of Thanksgiving-themed currency, you have several Washington issues to choose from. There are, of course, the Washington quarter and 2007 George Washington Presidential dollar. As well as the 2018 American Innovations dollar, which features his signature.

And if you prefer paper currency in your collection, you also have plenty of options. Washington has appeared on numerous paper currency notes. Including this Series 1917 $1 Legal Tender Note and this 1922 $20 Gold Certificate. 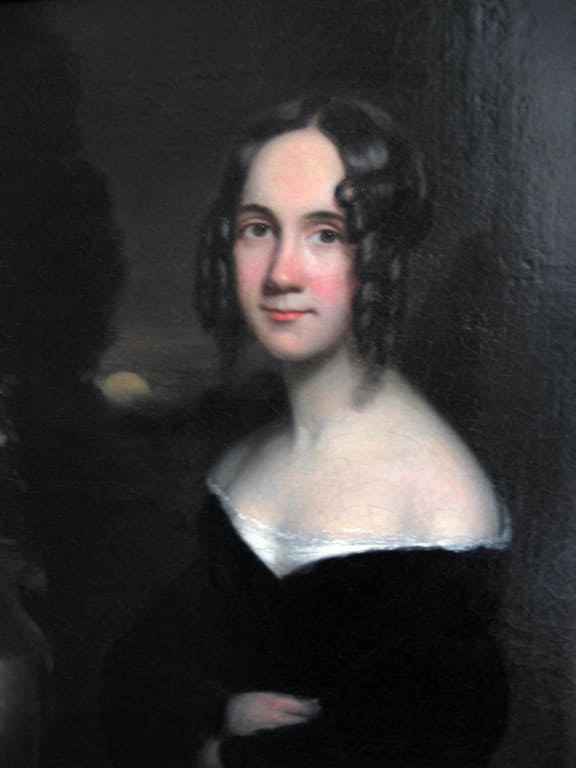 We owe our current Thanksgiving holiday largely to the tireless efforts of a single woman: Sarah Josepha Hale. Born in Newport, New Hampshire on October 24, 1788, Hale was a poet and a writer. She wrote the classic nursery rhyme “Mary Had a Little Lamb,” which she first published in Poems for Our Children in 1830.

Hale became the first female magazine editor when she was offered the chance to helm Ladies’ Magazine, which was later renamed Godey’s Lady’s Book. She held the position for nearly five decades and helped grow the magazine to a circulation of some 150,000. Without a doubt, she was one of the most influential women of her time.

And Hale used her influence to create the holiday we know today.

Inspired by the story of the Pilgrim’s Thanksgiving celebration, she dedicated herself to making Thanksgiving an annual national holiday. Beginning in the late 1840s, she wrote and published annual editorials making her case to her magazine’s readers. But she didn’t stop there. 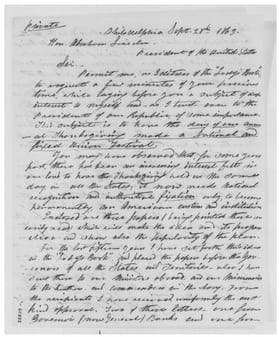 On September 28, 1863, Hale’s wrote her annual letter to president Lincoln. And this time, it worked.

Even as the Civil War raged throughout the nation, Lincoln was persuaded by Sarah’s letter. On October 3, 1863 – just five days after Hale penned her letter – he issued a proclamation urging the nation to set aside the last Thursday of November as “a Day of Thanksgiving and Praise.”

And in 1870, Congress followed suit and passed legislation establishing Thanksgiving as a national holiday – along with Christmas, New Year’s Day and Independence Day (the Fourth of July). President Ulysses S. Grant signed it into law.

Collectors wishing to create a set of Thanksgiving-themed coins and currency have several to choose from when it comes to Lincoln. Including the Lincoln cent, the 2003 Illinois Statehood quarter and the 2010 Abraham Lincoln Presidential dollar. As well as numerous paper money issues, including $5 Silver Certificates and $5 Federal Reserve Bank Notes. 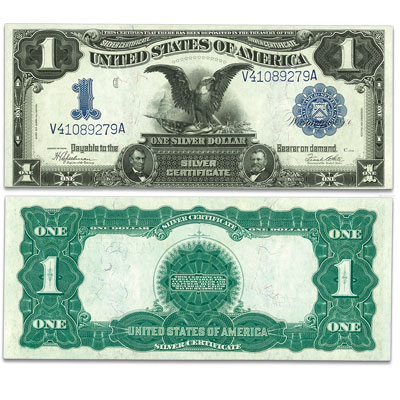 As for the president who signed the holiday into law, there is the 2010 Ulysses S. Grant Presidential dollar. As well as numerous paper currency notes, including today’s $50 Federal Reserve Notes and the prized “Black Eagle” Series 1899 $1 Silver Certificate that depicts both Lincoln and Grant (left).

However, your Thanksgiving set isn’t complete just yet. Because to truly capture this Holiday’s journey to annual tradition, you’ll want to include issues that recall…

The “Franksgiving” controversy that divided the nation

When Congress made Thanksgiving a national holiday in 1870, it didn’t specify an actual date. That was left to each president’s discretion. However, each president followed Lincoln’s example and set the date as the fourth Thursday in November.

Until Franklin D. Roosevelt, that is.

In 1939, there were only four Thursdays in November. FDR was advised having fewer weeks between Thanksgiving and Christmas would hurt the economy’s annual boom. So he used his presidential discretion to “move up” Thanksgiving to the third week of November.

The move caught the entire nation by surprise. And to say the public didn’t embrace his action would be an understatement. 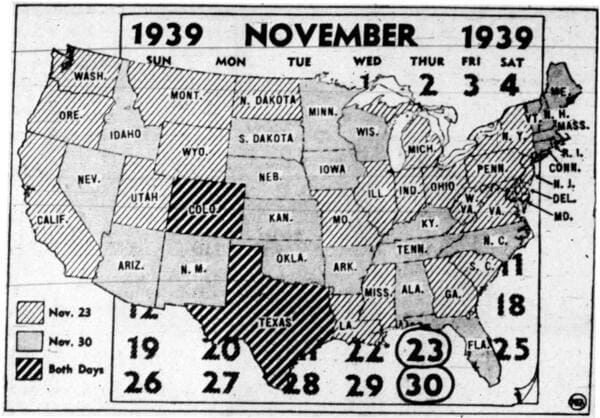 As this map from the Nov. 19, 1939 Tulsa Tribune shows, FDR’s decision to set Thanksgiving a week earlier divided the nation.

Many viewed the move as blatant commercialism. It didn’t help that FDR announced his decision in August. Holding the holiday seven days earlier might not seem like a big deal, but most Americans had already made their holiday plans. Even the annual Thanksgiving football games had been scheduled long in advance.

Some states supported the president and moved the holiday. But many did not, choosing instead to keep the traditional date. And some states decided it was too good an opportunity to pass up… and celebrated Thanksgiving on both the third and fourth Thursdays of November!

The following year, Roosevelt again chose to set the holiday as the next-to-last Thursday in November.

This time, FDR announced the date sooner in hopes the public would be more accepting. But while a few more states joined his side, most of the public was still opposed. So in 1940, America again celebrated two Thanksgivings. 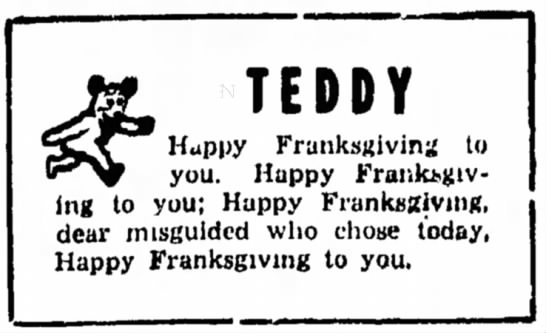 However, the public outcry was growing. Those opposed even took to calling FDR’s preferred date – the third Thursday of November – “Franksgiving” as you can see in ad clipping shown right.

On November 28, 1940 Representative Allen Treadway of Massachusetts took the case to the U.S. House of Representatives. And on January 3, 1941, Rep. Earl Michener of Michigan introduced House Joint Resolution 41 to establish Thanksgiving as the last Thursday in November.

The resolution passed the House on October 6, 1941, aided by a study that found moving the holiday had not affected holiday sales. The Senate unanimously passed the bill on December 9, 1941 after changing “last Thursday” to “fourth Thursday.”

Acknowledging his error and the will of the nation, President Roosevelt ended the controversy by signing the bill into law on December 26, 1941.

The “Franksgiving” controversy gives you a few more options to round out your set of Thanksgiving-themed currency.

Adding the Massachusetts and Michigan Statehood quarters will recall the members of Congress who helped end the confusion by giving the holiday a fixed date. While the Roosevelt dime and the 2014 Franklin D. Roosevelt Presidential dollar recall the U.S. president whose decision to move the holiday caused an uproar across the nation.

And if you really like to hold history in your hand, consider adding these 1939-1941 Lincoln cents from the “Franksgiving” years to your collection!

Do you have any favorite Thanksgiving traditions or holiday-related collecting stories? Share them in the comments below!