It took some effort to get off the ground, but the next big thing in coin collecting is here – Littleton Coin Company’s Virtual Albums! Let’s face it – it’s great adding coins to your collection. But where do you turn when your collection grows faster than you’re able to keep track of? Imagine being out and about, and you come across a coin you’d love to add to your collection… but wait!

Do you have it already?

If so… is this one nicer?

We kept hearing from collectors who grew frustrated when they couldn’t remember what they had, or what they need! They thought it would be handy to have a list on hand – but found written lists cumbersome. People wanted a simple, easy way to track and search their collections on the go.

Virtual Albums to the rescue

Littleton Coin Company’s Virtual Albums offer collectors a great new way to access their collections at any time, from anywhere. When we first started working on the concept of an easy-to-use list for collectors, going digital was the obvious choice. Thanks to a massive undertaking by our Web and Information Technology groups, the first round of Littleton Coin Company Virtual Albums were unveiled last year!

Adding a coin to a Virtual Album is simple – just click on the +!

Wanting people to have as realistic an experience as possible, the Virtual Albums were set up to resemble Littleton’s classic green albums. With our user-friendly interface, you’re able to choose from “grid view” (which more closely resembles an album page, with full-color photos) or “list view” (which is a newer feature added thanks to customer feedback). Here, you can add multiple coins and their grades at the same time, as well as print your lists if you’d like.

Under List View, shown here, you can add multiple coins to an album at once.

If you’re using a Littleton Coin Company Virtual Album to mirror your physical collection, you’re able to select your coin’s grade each time you add a piece to your album. You can also make notes to indicate who graded the coin, and any general information you may want to recall later (like where you bought it, the purchase price, or certification information).

Under “grid view,” each coin in an album appears greyed out, with a white “+” covering it. To add the coin to your album, click on it. You’ll be taken to the coin’s information page, where you can choose your grade and add any information. Click “save changes,” and the coin appears in full color on your album page – it’s now added to your collection!

It’s simple to remove a coin, too. Once a coin is in your album, the option to “Remove from my album” appears under “save changes” on the coin’s info page.

You can find even more detailed information on our How it Works page.

Off to a great start! 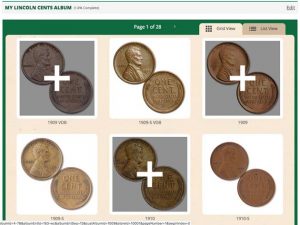 This customer has just added three Lincoln Wheat cents to their Virtual Album!

The response to this project has been fantastic so far! There are more than 1,300 people using Littleton Coin Company’s Virtual Albums, and they’ve assembled over 4,800 albums. (That’s a whopping 84,000 coins!) As one user, S.H. from Crystal River, FL told us, “I’m being wowed by the variety of all the coins we really don’t know anything about. It’s easy to get stuck on scrolling through all the pages. I love it!”

A work in progress

Thanks to customer feedback since our initial release of the Virtual Albums, we’ve made a few modifications – including the ability to print from the list view. From our initial run of 10 albums, we’ve expanded the library to 20 titles. And more are being added all the time (I have it on good authority that the next group is coming very soon)!

Have you set up any Virtual Album titles for your collection yet? If so, how have you gotten the most enjoyment out of it? If not – here’s a link for you to set up your Littleton Coin Company Virtual Albums today!