Seventy-five years ago – January 25, 1945 – jubilation erupted. The Allied Forces successfully pushed the Nazis out of Belgium’s Ardennes Forest. In fact, the Allies pushed them back so far into Germany that they had to cross the Rhine River!

No one could have predicted the bloodiest European campaign in WWII would turn out to be the game-changing victory that forced the Nazis to surrender a mere four months later.

The Lay of the Land 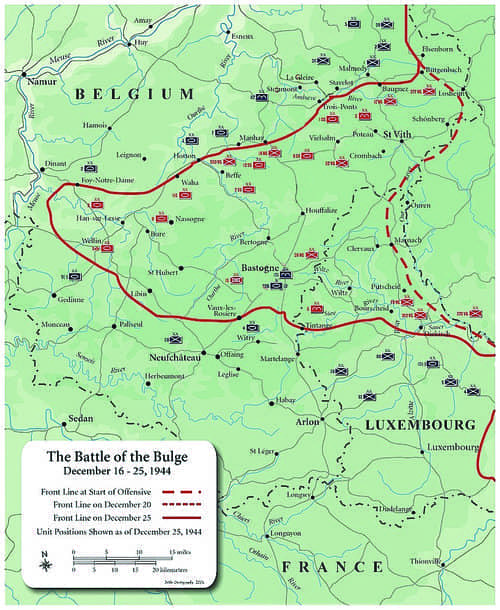 Allied Forces had deployed troops along a 600-mile “western front” with the intent of preventing a Nazi invasion. The front ran from the Dutch coast on the North Sea, south through Belgium, Luxembourg and France to Switzerland.

With Christmas approaching in December of 1944, there was hope that fighting might ease up. Exhausted men – most of them not career soldiers – looked forward to some down time to rest and to repair military equipment. There were just 83,000 U.S. troops and 242 tanks spread across the thick Ardennes Forest where the front line ran through eastern Belgium.

But on the cold and mist-shrouded Sunday morning of December 16, 1944, over 200,000 Nazi troops and an estimated 1,000 tanks breached a 75-mile stretch across the Ardennes’ narrow valleys and high ridges. They had a two-prong goal. One was to divide the Allied coalition in northern Europe. The other was to reach the Allied supply port of Antwerp, with its access to the North Sea.

“Better to fight for something in life than to die for nothing.”

Nazi troops poured into the bulge and Allied Forces stationed outside the forest rushed to mount a counter-offensive. Patton was in Luxembourg, preparing the 3rd Army for tank warfare in Germany.

Patton excelled at mobile combat. In World War I he was assigned to the first-ever U.S. Army Tank Corps. Under Gen. Dwight D. Eisenhower’s orders during Operation Torch in North Africa, Patton delivered the Allies’ first WWII land victory against the Nazis at the Battle of El Guettar in Tunisia. He then crossed the Mediterranean to help liberate Sicily.

The West Point graduate was a strict disciplinarian. In his 50s in WWII, he used salty language to motivate his young citizen-soldiers, including this relatively mild line in a pre-combat speech: “I believe in the old and sound rule that an ounce of sweat will save a gallon of blood.”

To divert attention away from northern France where the Allies were planning to attack the Nazis’ heavily fortified wall in Normandy, Patton publicly fronted a “ghost army.” Sometime after Operation Overlord was completed with the liberation of Paris in August 1944, Patton was sent to Luxembourg to prepare to invade Germany.

But before that happened, the colorful Patton and the low-keyed Gen. William “Texas Bill” Simpson would be deployed as part of a “pincer strategy” to squeeze the Nazis from the Ardennes.

The Pinch is on!

Stationed north of the Ardennes, Simpson and the 9th Army were the first to respond to the Nazis’ Ardennes invasion. On December 17, Simpson sent the 7th Armored Division down to St. Vith, one of two critical crossroad towns now inside the Nazi bulge.

To prevent the Nazis from taking the southern transportation hub of Bastogne, Eisenhower dispatched the 101st Airborne Division from France. Under the command of Brigadier General Anthony McAuliffe, the 101st Airborne – nicknamed the Screaming Eagles – had earned kudos for their role in the D-Day landing that June.

But defending a municipality was far different than setting up combat lines across farm fields in Normandy. By December 21, the 101th Airborne found itself surrounded by Nazis troops. The Siege of Bastogne was on!

Yet, even as provisions and ammunition ran low, McAuliffe refused the Nazi bid to surrender with his famous one-word answer “Nuts!” 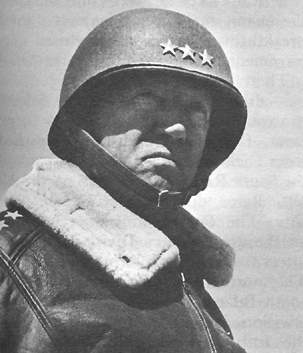 As he had in Operation Torch, Eisenhower was counting on Patton’s aggressive tactics. Hoping for a Christmas surprise December 25, Patton’s plan was a day late because freezing winter weather held up tank travel. But when they arrived on the outskirts of Bastogne, Patton’s 3rd Army and 10th Armored Division attacked with force. By January 3, 1945, the Nazis were in retreat. But Patton kept up the pressure, pushing them ever eastward, back into Germany, back across the Rhine.

Fought over an intense six-week period, the Battle of the Bulge was the bloodiest campaign of WWII, involving 1 million military personnel. The U.S. suffered an estimated 80,000 casualties; the Nazis, over 100,000. The battle’s formal end came on January 25, 1945. Just how pivotal it was in turning the tide of World War II became clear four short months later with the Nazis surrendered and victory in Europe declared!

Few collectibles can match the historical interest and significance of U.S. coins and stamps issued during WWII. Military collectors might also be interested in this special set with an informative story card showing Gen. Patton, plus the other victors of WWII colorized on Kennedy half dollars.