When the Statehood quarters began in 1999, with new reverse designs every 10 weeks, it kicked off a dramatic new era in U.S. coinage! An era that has produced Westward Journey nickels, 100th anniversary Lincoln cents and National Park quarters. As well as Presidential dollars and Native American dollars. All have featured changing short-lived designs – minted for one year or less and then never again! 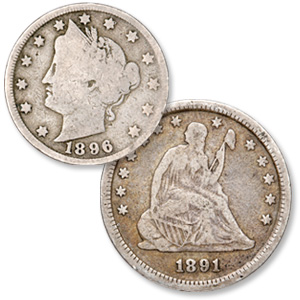 Before the Statehood quarters, U.S. coin designs were often in use for decades. And until the early 20th century, the same design was often seen on several denominations at once. You’ll find Christian Gobrecht’s “Liberty Seated” motif on dimes, quarters and half dollars from the late 1830s until 1891. And on silver dollars from 1840-1873. You’ll find Charles Barber’s “Liberty Head” design on nickels from 1883-1912. But also on dimes, quarters and half dollars from 1892-1915!

What brought about this “radical” change?

There’s been no official word from the U.S. Mint. But I think a major influence on recent coinage has been the activity of foreign mints. These national mints have issued an amazing variety of coin designs, compositions, shapes, colors, holograms and other innovations in recent years. And never before have coins so dramatically highlighted the traits of their subjects! World coins have featured animal species, flowers, trees, mountains, landmarks, buildings, meteorites and more.

These coins with educational, ever-changing designs have produced sizable income for world mints from collectors. So during the 1990s, the U.S. Mint must have realized it was missing a big opportunity…

In a major departure from the usual, the U.S. Mint introduced a ten-year series of quarters in 1999 with short-lived reverses highlighting unique symbols, landmarks and heritage of the 50 states. Featuring 5 new designs per year in order of statehood, the extremely popular Statehood quarters attracted tens of millions of Americans to the coin collecting hobby. And the great success of the program soon inspired other non-traditional series of U.S. coins…

By striking silver and clad Proofs of these short-lived designs, and offering a broad variety of sets for collectors, the mint has greatly increased its revenue. But making special issues and sets for collectors has also helped defray the costs of regular-issue coinage. Some circulating coins even cost the mint more than their face value. During 2016, it cost 1.5¢ to produce and distribute each penny and 6.32¢ for each nickel!

Innovations are likely to continue

Because Littleton sells new-release coins from around the world, we see many of the exciting innovations from foreign mints. And we see how popular these coins can be among collectors…

You can be sure the U.S. Mint is watching as well! And that mint officials know it will take coins at least as interesting as National Park quarters and other current programs to keep collector interest. So innovations are likely to continue… and who knows what lies ahead? It should be interesting!

We welcome your thoughts or comments about current U.S. coinage and/or coinage from foreign mints.