If you’re like me, the arrival of summer whets your appetite for travel, adventure and visiting places you’ve never been. Of course, the warm weather is most conducive to beautiful outdoor destinations, and that’s what the 2010-2021 National Park Quarter Series is all about! Featuring 5 new issues per year and reaching its midway point this summer in honoring a national park or site in each of the 50 states, D.C. and the 5 U.S. territories, this series showcases America’s most beautiful, significant and inspiring places. From the natural splendor of the Grand Canyon and the Great Smoky Mountains, to the historical importance of Gettysburg and Fort McHenry, the National Park quarters honor federally protected sites that exude the true spirit, heritage and grandeur of our country.

Living in northern New Hampshire, I’m very fortunate to reside in the heart of the White Mountains – featured on the 2013 White Mountain National Forest quarter and widely considered the most scenic mountains east of the Rockies. I’m also very fortunate that at the age of nine, our family took a lengthy western camping trip that included visits to Yellowstone, Glacier, Olympic, Yosemite, Arches and Grand Canyon National Parks – as well as Mount Rushmore National Memorial, Mount Hood National Forest and San Antonio Missions National Historical Park (the Alamo). All of these revered places are commemorated in the National Park Quarter Series, and I wonder how many I’d have visited at this point in my life without that family trip…

I must confess that I haven’t taken the time or made the effort to get to some much closer national parks and sites, even though they’ve been well recommended by family or friends. So it’s been a treat to research and write about each new National Park quarter as it’s released – I can vicariously visit each featured location! Between those that I’ve been to, and those that I’ve written about, I’ve gained a much greater appreciation for the commitment and sacrifices of earlier generations of Americans, and for the accomplishments of early conservationists and national park proponents like 26th president Teddy Roosevelt and Sierra Club founder John Muir. 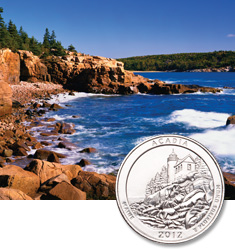 If you’ve been collecting the National Park quarters, perhaps you’ve been inspired to visit some of the featured locations in your own part of the country. And if you haven’t been collecting these coins, you’re missing a series that serves as a travelogue to America’s most revered places. What an amazing journey of discovery it would be to visit all these national parks and historic sites in one grand excursion!

One interesting adventure is to visit the sites commemorated on the coins you’ve collected. Here’s a partial list of sites featured in the National Park Quarter Series by region of the country:

If you’ve been collecting the National Park Quarters or you’ve visited some of these cherished places, please share your thoughts and recommendations with other collector-travelers!