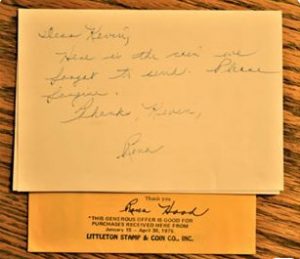 Recently, I received a special message from Illinois customer Kevin A. While going through a box that he’d tucked away years ago, Kevin found this note from celebrated Littleton Coin Company representative Rena Hood.

Kevin recently discovered this note, which was sent to him by Rena in 1974 or 1975. He said, “If one were to put a face to Littleton Coin Company, I still see the friendly image of Rena Hood! It was [an] honor to get a personal note from her, and I still get excited when I see it.” We loved seeing it too, Kevin – thanks for taking the time to share! 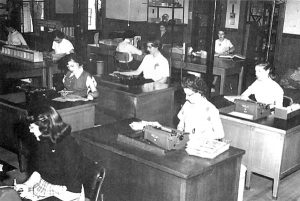 An avid fly fisherwoman, Rena could relate a bear or fishing story, give collecting advice, take an order, and catch up on a patron’s family life – seemingly all at once. Her cordial letters delivered individual attention to collectors everywhere.

Her unique style was adored, and her honest, homespun notes and letters to customers were filled with sound advice. She received thousands of customer letters, phone calls and personal visits throughout her career – in fact, many customers traveled long distances to Littleton, NH to meet this person who had been so thoughtful and helpful!

Collecting from an early age

Kevin was kind enough to send us this photo of him as a Cub Scout who already enjoyed receiving packages from Littleton!

Kevin fondly recalled receiving coins from Littleton Coin Company as a kid, saying that his collecting obsession started when his mother gave him “penny books” when he was 5 years old, so that he could begin a collection from his change! From there, he discovered the joy of Littleton’s “on approval” service. His shipments would always arrive with a printed letter from Rena Hood, so “early on I learned her name and discovered she was the ‘customer service’ person.”

One day, he received this handwritten note from Rena and he “…was thrilled! I knew it was not printed, but a personal message from Rena Hood! I put it away… I knew she was a legend at Littleton Coin.”

She truly was! Her legacy lives on today with the Rena Hood/Bart McKinney Scholarships. These $2,000 scholarships are awarded annually to students who are children of employees.

A huge thank you to Kevin for sharing this memory with us. For everyone else out there – what has been your favorite Customer Service experience with Littleton Coin Company?