Love it or hate it – this past weekend, we all had to “spring ahead” for Daylight Saving Time. Unless, of course, you’re in Hawaii or the portions of Arizona that don’t participate in the time change… 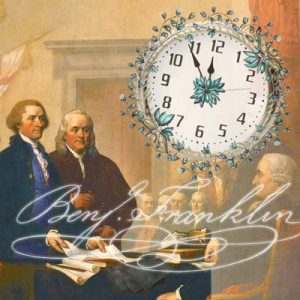 At first, the time change was hailed as a way to save energy and give people more “free time” during the daylight hours. There were even rumors that it served as a benefit in the farming community, giving those hard working folks more daylight hours in which to do their tasks.

In recent years, there have been quite a few people who have spoken out against the time change. People used to say that it was a benefit to farmers – but really, the plants and animals certainly don’t follow what the clock says. And articles have been published that go so far as to state that Daylight Saving Time can be hazardous to peoples’ health!

So where did the idea for changing time to maximize waking daylight hours come from? It’s often said that Founding Father Benjamin Franklin “invented” the concept of Daylight Saving Time.

The wit & wisdom of Ben Franklin

In 1784, Franklin wrote an article for the Journal de Paris. Titled “An Economical Project,” the article discussed the benefits of waking early with the sun, versus pushing the need for artificial light later in the evening.

Though many assume this makes Ben Franklin an early advocate for Daylight Saving Time, many overlook the fact that his article was pure satire! Take, for instance, this quote – which lays out Franklin’s proposed regulations to ensure that all Parisians become early risers:

First. Let a tax be laid of a louis [gold coin] per window, on every window that is provided with the shutters to keep out the light of the sun.

Second… Let guards be placed in the shops of the wax and tallow chandlers, and no family be permitted to be supplied with more than one pound of candles per week.

Third. Let guards also be posted to stop all the coaches, etc. that would pass the streets after sunset, except those of physicians, surgeons and midwives.

Fourth. Every morning, as soon as the sun rises, let all the bells in every church be set ringing; and if that is not sufficient? Let cannon be fired in every street, to wake the sluggards effectually, and make them open their eyes to see their true interest.”

Although he might not have invented Daylight Saving Time, Franklin is credited with the quote: “Early to bed and early to rise makes a man healthy, wealthy and wise”! 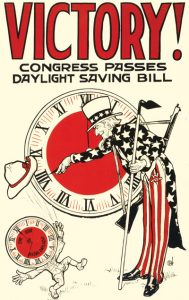 So, if Benjamin Franklin didn’t propose Daylight Saving Time… who did?

Turns out the credit goes to George Hudson – an entomologist who, in 1895, wrote about his desire for more daylight hours in the evening.

The change first came in to play during World War I. In March of 1918, Congress passed an Act that both established standard U.S. time zones, and set that the time would move one hour forward at 2:00 a.m. from the last Sunday in March until the last Sunday in October.

Following the war, the unpopular law was repealed and Daylight Saving Time became an option for each state to decide on. It was instituted nationwide once again during World War II, and reverted to each state’s choice once the war was over.

Finally, President Lyndon Johnson signed the Uniform Time Act of 1966. This standardized Daylight Saving Time across the nation. It also gave states the ability to exempt themselves from the time change if they chose.

For now… we’ll keep changing our clocks (as soon as we remember to)!