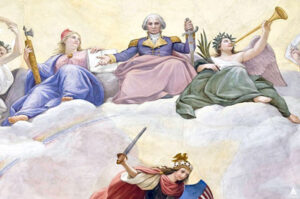 Located in the U.S. Capitol’s Rotunda, Liberty wears the red cap of freedom and holds the fasces of power as she sits on the right side of George Washington.

Liberty received a radiating crown to wear on the 1921 Peace dollar. But before that, our national symbol wore a different design on her head. Let’s look at some sought-after coins featuring the cap of freedom as we celebrate our nation’s liberation from royal rule over 245 years ago.

All Roads Lead From Rome

Looking for examples on how to set up a balanced government, our Founding Fathers found inspiration in the ancient civilizations, Rome especially. To forge a new national identity, they turned to classical symbols. At the top of the list was the Roman goddess, Libertas.

Benjamin Franklin, in fact, marked America’s victory over the British with the Libertas Americana Medal. The bust of Libertas, who personified liberty and personal freedom, was depicted with a vindicta, or rod, on top of which rested the cap of freedom behind her head. 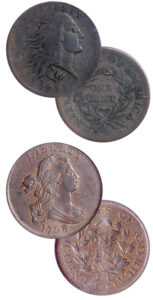 The cap was part of an ancient Roman emancipation ceremony. Touched by a rod and proclaimed free by a Roman magistrate, former slaves wore brimless, conical felt caps, their tips bent forward, as visual recognition of their new status. They were similar to hats worn in the Kingdom of Phrygia, in present-day Turkey, that became part of the Roman Republic in B.C. 116. Phrygian cap is often used interchangeably with freedom cap.

With her hair flowing in the wind, the rod and cap behind her, the American Liberty design became the obverse for the new United States large cent. But there was a two-fold problem.

For small change, the large copper cents were bulky – larger than today’s quarters. Then there was “the look.” The public saw in Liberty’s profile, with her hair streaming in the wind, an expression of fright. From 1793 to 1796, the U.S. Mint struck the Liberty Cap Large Cent. But public outrage would not be quiet. In 1796, the Draped Bust Large Cent was introduced as the replacement design. There was no head covering. A ribbon tied Liberty’s hair at the back of her head.

But freedom caps showed up on other denominations. Eventually, an entire collecting category emerged. Known as capped coins, some rare examples in better grades can be found here. But as Littleton’s coin buyer Ken Westover notes, “Most early Capped Bust coinage is far scarcer in availability and quality.”

The Most Well-Known Freedom Cap

The freedom cap came back in vogue thanks to Philadelphia Mint engraver George T. Morgan. He won the design competition for a new dollar to be struck on silver fast coming out of the deep veins of Nevada’s Comstock Lode. 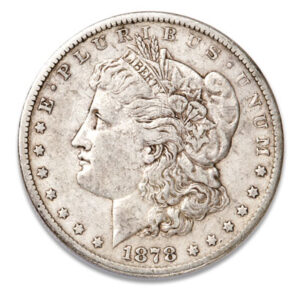 Before immigrating in 1876 to America from England, Morgan apprenticed as a die maker under the Royal Mint’s chief engraver. William Wyon was best known for his coin and medal designs featuring Queen Victoria. The first medal was issued in 1837 when she became queen at the age of 18.

In the U.S., Morgan wanted an American girl to represent Liberty, not an allegorical interpretation. He found his ideal in schoolteacher Anna Williams. On Anna’s head, Morgan placed an elegant, and generously sized, freedom cap. He encircled it with a band emblazoned with a single word: liberty.

The first Morgan silver dollars started rolling off the coin presses on March 11, 1878. No one could have predicted their wild popularity, nor enduring appeal with collectors. Observed Westover, “Morgans are the most collected U.S. coin in the world.”

If you’re curious to discover just how broad is the collectability of Morgan silver dollars, take a look at this fascinating blog article on Morgan varieties.

The Most Controversial Freedom Cap 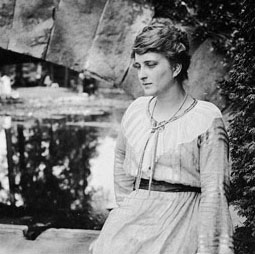 The freedom cap’s symbolism is not without debate. When it comes to the 10-cent piece, does the tightly fitted hat mean it should be always called the Winged Liberty Head Dime? Or should the common name for the obverse motif default to the Roman messenger god, Mercury?

Sculptor A.A. Weinman intended the wings to represent freedom of thought. Elsie Kachel Stevens, a neighbor, is credited as Weinman’s inspiration. Having done a bust of her in 1913, many believe she was the inspiration for the dime’s obverse motif.

But many in the public and popular press believed differently when it came to talking about the new dime’s design. To them, the model’s profile depicted Mercury. Neither group said much about the dime’s reverse design, which was another homage to Rome. 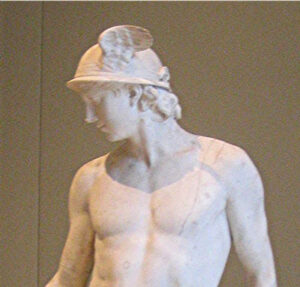 On the coin’s tail, Weinman shifted the focus away from a freedom pole to a fasces. The word is the Latin plural for a bundle of wood rods, wound together by a leather strap, with an axe – the symbol of readiness – in the middle. In ancient Rome, it was the emblem of power. Weinman encircled it with an olive branch, the symbol of peace.

After the dime’s 1946 design change to honor President Franklin D. Roosevelt, the U.S. Mint didn’t release any new coin designs that showed a freedom cap. But last year it did release a stunning five-coin set of Morgan silver dollars. Struck on the 100th anniversary of the last Morgans ever issued for circulation, this Uncirculated all-mint set makes these Morgans the only coins to show the Phrygian cap of freedom released in the 21st century – so far!

How many capped coins are in your collection?