The idea for this Heads & Tails blog came up in the early weeks of the coronavirus pandemic. As employee-owners of Littleton Coin, we started early exploring ways to stay safe and healthy so we could continue to provide you – our collectors – with the quality service you’ve come to expect during our 75 years of business. We’re grateful for your enthusiasm of this endlessly fascinating hobby.

Tossing a pebble into the gratitude pool got us thinking about individuals who are unwavering in their dedication to provide comfort, safety and protection at a moment’s notice. They’ve truly been making a difference in their communities during this pandemic. 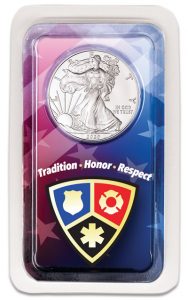 Designing an appreciation Showpak® around the 2020 American Silver Eagle gave us an opportunity to dive into the modern history of professionals who first arrive on the scene of trauma. Did you know that as a name, the field of emergency services started being used in the 1950s? It included not only police officers and firemen, but also hospital’s ER personnel, tow-truck operators and medical equipment companies.

Our exclusive Showpak for Emergency Services is a hat-tip to the well-trained police, firefighters and EMTs who are always ready to take care of us in times of crisis – no matter what, no matter where. When they spring into action, their efforts often make a difference between life and death. Their compassion softens hard situations. It’s a remarkable dual talent, and deserving of recognition – especially now.

As we kept researching the 1950s, we realized an extraordinary medical breakthrough took place to stop an earlier pandemic.

Dr. Jonas Salk was a scientist-physician always looking to solve a problem. He pursued medical studies at the request of his mother, but research was his passion. While studying flu viruses at the University of Michigan, opportunity came knocking on Salk’s door in 1947.

Not too far away, the University of Pittsburgh had received a National Science Foundation grant plus funding from the National Foundation for Infantile Paralysis (known today as March of Dimes) to find a cure for polio – a crippling, infectious disease. 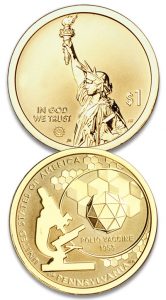 Salk went to Pittsburgh and put together a team. After several years of research, they came up with a radical concept for a vaccine that – after two years of clinical trials – turned out to be both safe and effective. It’s estimated the vaccine has saved more than 10 million lives since being administered to the general public in 1955.

When the U.S. Mint rolled out its new Innovation Dollar series in December 2018, Pennsylvania was on the schedule to receive the second coin design celebrating a scientific advance. It was the Salk polio vaccine. This 2019-S Reverse Proof Dollar comes with a colorfully illustrated and informative display folder that brings this American innovation to life.

Salk wasn’t the only scientific researcher to reposition a medical degree. 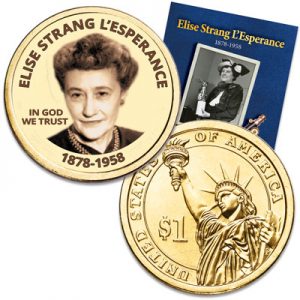 made a place for herself in history books motivated by the loss of her mother to cervical cancer. She switched from practicing pediatric medicine to looking for cancer cures. At her research clinic, the early detection for cervical cancer known as the Pap smear was developed in the 1940s.

L’Esperance worked on other early-detection procedures as well as preventative health practices for women – revolutionary ideas for the first half of the 20th century. Her advocacy work represented a breakthrough in women’s healthcare, becoming a national model for encouraging women to get a complete physical exam every year. 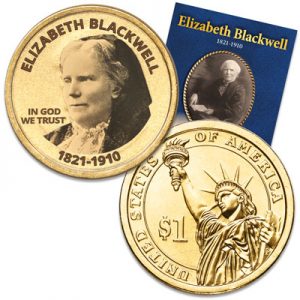 Her clinic was based at the New York Infirmary. This hospital was ground-breaking for its time – it was launched in 1857. And by Dr. Elizabeth Blackwell, America’s first woman physician! Besides caring for women and children too poor to afford medical care, Blackwell also trained women to be nurses for the Civil War and served on the U.S. Sanitary Commission, helping shape policy for the care of wounded and sick soldiers.

L’Esperance and Blackwell shattered glass ceilings in their respective eras. We’ve chosen to celebrate these two female doctors in our exclusively curated series on Prominent Women in U.S. History. Many coin collectors of colorized golden Presidential dollars met them in this Heads & Tails blog.

The Civil War’s other female hero 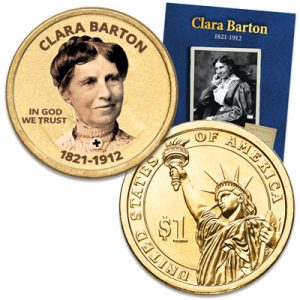 The newest woman in our popular series is Clara Barton, a former teacher we’ve come to think of as a 19th century first responder. Barton fearlessly and repeatedly volunteered to go to the Civil War front to bring much needed medical and surgical supplies. Her bravery and tenacity won her the nickname of “angel of the battlefield.”

When Barton learned of the Switzerland-based Red Cross, which called for international agreements to protect the sick and wounded during wartime, she established the American Red Cross. Since 1881, the organization has moved beyond just military support to include disaster relief and more recently, to help rebuilding communities. 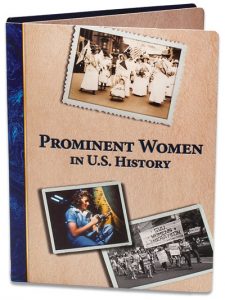 These women’s stories come on cards you can organize in our beautifully designed custom 12-coin display folder for Prominent Women in U.S. History. The folder includes a pocket for the story cards as well as slots for each colorized golden Presidential dollar.

Whether you’re looking to start a collection relating to health and science, women who changed the course of American history, or you want to thank a first responder, Littleton Coin can help you. Our online store is open 24/7. And shipments go out Monday through Friday, just as they have since 1945. Take a look around. There are new coins and currency to discover every day!