Fifty years ago, during the early months of 1971, U.S. Mint facilities started rolling off their coin presses a new dollar that honored one of WWII’s towering heroes and our nation’s 34th president, Dwight D. Eisenhower.

The new coin represented a number of historic firsts:

Let’s look at some more fascinating facts linked to the Eisenhower dollar coin series celebrating its 50th inaugural anniversary in 2021.

On June 19, 1945, two significant people attended the WWII victory parade in New York City. Five-star General Dwight D. Eisenhower, Supreme Allied Commander of the Expeditionary Force in Europe who was being honored, was one. The other was Frank Gasparro, a junior engraver at the Philadelphia Mint, paying his respects to the military hero standing in an open convertible as it drove down Fifth Avenue.

Returning home, the sculptor sketched a profile of Eisenhower, emphasizing a face that showed courage and character. Gasparro would consult his inspired sketch when the time came to design Eisenhower’s silhouette for the new dollar coin. 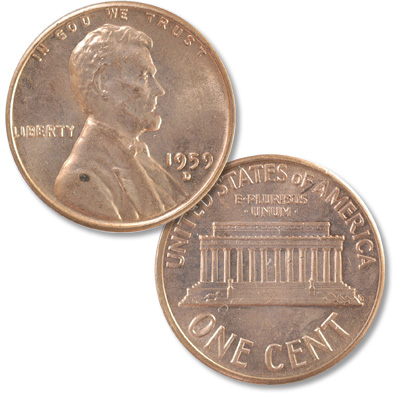 Seven years later, in 1952, the war general nicknamed Ike, was elected president. Serving two terms from 1953 to 1961, he oversaw one of the nation’s largest economic expansions in peacetime. Eisenhower also gave his nod to Congress in 1956 as it adopted “In God We Trust” as the official U.S. motto. He did it again to the follow-on legislation to have the motto printed on paper currency, a move that followed the motto’s stamp on coins begun during the Civil War.

Two years later, Eisenhower agreed to a new reverse design for the cent. Known as the Lincoln Memorial Cent, it debuted on the 150th anniversary of Abraham Lincoln’s birthday in 1959. The designer? Frank Gasparro.

Legislating the Ike Dollar into Existence

For a series that only lasted from 1971 to 1978, the Ike dollar represents interesting opportunities for collectors, from the traditional dates and mint marks to metal compositions and varieties. Here’s a brief run-down of the legislative journey that gave rise to some of those numismatic nuances. 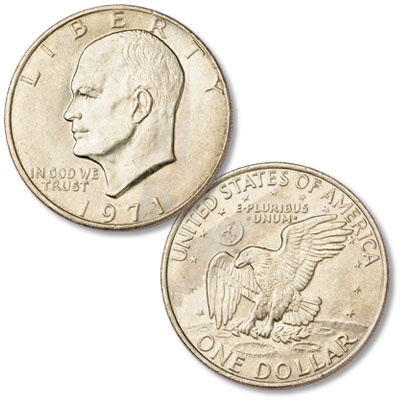 Dwyer’s Democratic counterpart in the House, Robert N. Giaimo of Connecticut, filed a bill proposing that a dollar coin with Ike’s profile be minted in copper-nickel. Why? The soaring cost of silver bullion had prompted the US Mint to switch to that less expensive metal composition for coins in 1965, starting with quarters and dimes.

Besides, Giaimo pointed out, the new dollar coin would find favor in vending machines and at Nevada casinos, which were switching over to coins from privately issued tokens.

But then, former First Lady Mamie Eisenhower weighed in on the silver debate. She recalled how much her husband liked to give silver dollars as mementoes, especially if he could find them from 1890, the year he was born. Ironically, on October 14, 1969, Ike’s birthday, Congress delivered a split vote on the new dollar’s metal composition. The House voted for the cupronickel-based dollars, the Senate for a dollar minted in 40% silver.

Barely two weeks later, Democratic Representative Robert R. Casey from Texas introduced a bill to honor Eisenhower on the observe and, in a nod to Ike on the reverse, a design of the Apollo 11 Moon Landing that had occurred earlier in the summer of ’69. It was Eisenhower, back in 1958, who signed legislation creating the civilian National Aeronautics and Space Agency (NASA) to oversee the U.S. space program.

Finally, in 1970, both chambers of Congress were able to reach a compromise. Shortly before the clock struck midnight on December 31, 1970, President Richard Nixon signed authorizing legislation. Denver, and then Philadelphia, rolled the first circulating dollars off their presses in February of 1971. The prestigious San Francisco Mint followed in March with silver Eisenhower dollars.

After So Many Firsts, One Last

In 1978, when the Ike dollar was struck for the last time, it also was the last of the large-size dollar coins to be issued for circulation in the 20th century. The Eisenhower, Peace and Morgan dollar coins all shared the same diameter: 38.1mm. In weight, the Ike dollar came in at 24.59 grams, slightly less than its two predecessors, which each weighed 26.73 grams of silver.

Want to discover why the Eisenhower dollar’s popularity as a collectible coin endures? Here’s a link to a 2014 Heads & Tails blog that explores more fascinating facts.

And, if you already have a few Eisenhowers saved up, check out this handsome green Littleton Coin album that can help you get started organizing your dollar coins into a collection!