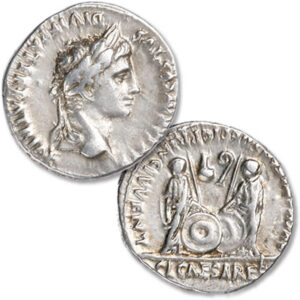 There are many things I love about coin collecting. But one thing I love most is the way coins let you – literally – hold history in the palms of your hands.

And you won’t find a better example of this than ancient coins.

There’s just something exciting about holding a coin that was struck by hand thousands of years ago. Especially when the coin is directly connected to an important person or event whose story has survived the ages.

The exciting allure of ancient coins…

Even outside the world of numismatics, I’m a bit of a history buff. I grew up captivated by the stories of Greek and Roman mythology. And I loved reading and rereading their exciting (and often tragic) tales of heroic men and women, mighty immortals and fantastic beasts and monsters. 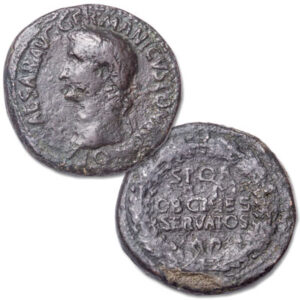 As I got older, I studied the ancient Greek and Roman civilizations. And I found myself fascinated all over again by how many historical details survived the Roman Empire’s decline.

From recording military victories to preserving accounts of their domestic accomplishments, Roman rulers were obsessed with recording their legacies.

And that works out wonderfully for those of us who enjoy coin collecting. Because it often allows us to connect the design of a particular coin to actual historical people and events.

Suetonius and the Caesars

Recently, I began rereading an old favorite of mine. And when I say “old,” I mean it. While I first read this book some twenty years ago, it was actually written over 1,900 years ago. 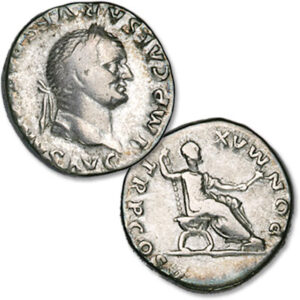 Penned by Roman historian Gaius Suetonius Tranquillus around A.D. 121, Lives of the Caesars is also known as The Twelve Caesars. It’s a collection of biographies covering Julius Caesar and the first eleven emperors of the Roman Empire, from Augustus to Domitian.

And while some history books can be somewhat boring and dry, Lives of the Caesars is anything but.

For instance, did you know Augustus might have secretly expected his heir, Tiberius, to fail? Or that when a young Julius Caesar was captured by pirates, his demanded they increase his ransom… then raised an army to track the pirates down and recover it?

You’ll find these stories and more in the pages of Suetonius’ book. And whether you want a detailed summary of a ruler’s reign or scandalous rumors that circulated during and after his lifetime, suffice to say Lives of the Caesars is quite the read.

But literary entertainment value aside, Suetonius’ work offers even more for those of us who enjoy coin collecting. Because it peels back the veil of history and gives us a tantalizing look at the lives of those who issued the coins. 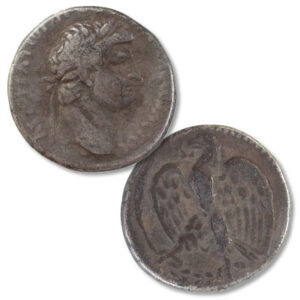 If you’re interested in the Roman Empire or the coins of its rulers, Lives of the Caesars is definitely worth a read. Especially if your collection includes any coins issued under the twelve rulers the book covers.

And if you’re like me, you might even think about building a “coins of the twelve Caesars” collection.

Just be warned: such a collection is a serious endeavor. While some of these rulers’ coins are fairly easy to obtain, others can be both hard to find and expensive.

Coins of some rulers, like Julius Caesar, are difficult to obtain due to their fame and historical significance. Their coins are highly sought after because they are so well known. Others, such as Otho, ruled for just a short time. So fewer of their coins were struck, and even fewer still survive for collectors.

But this doesn’t mean you should give up on adding ancient Roman coins to your collection.

Collecting the coins of the Roman Empire is something most collectors can do. You just need to set your expectations and budget within your means, and find a dealer you can trust. 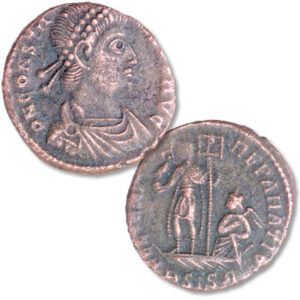 Ancient coins – especially those of the Roman Empire – can be extremely satisfying to collect. Not to mention the prestige they can bring to your collection.

And while a complete collection of all “Twelve Caesars” from Suetonius’ book may be out of the range of most collectors, many ancient coins are more easily obtained.

You’ll find a wide selection of ancient coins to choose from at Littleton Coin Company, including coins from the Greek, Roman and Byzantine Empires. Just go to www.littletoncoin.com/shop/ancients – and check back often so you don’t miss out when new items become available.

However, the easiest way to enjoy ancient coin collecting is to join one of Littleton’s popular collector clubs. 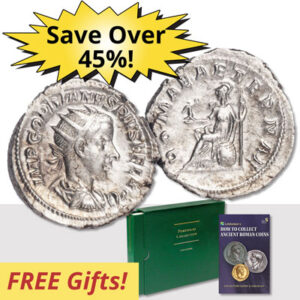 As a member, each month you’ll receive an affordable selection of ancient coins to preview at no obligation for up to 15 days in your own home before you buy. So you’ll always have plenty of time to consider each coin and decide if it’s right for your collection.

Join today and you’ll save on your first selection. Plus, you’ll receive FREE gifts at regular intervals to complement your growing collection.

And Littleton even has two clubs specifically designed for those wanting to collect coins of ancient Rome.