One of mankind’s greatest achievements…

Fifty years ago, on July 20, 1969, with the entire world tuned in by television and radio, American astronaut Neil Armstrong uttered these words: “Houston, Tranquility Base here. The Eagle has landed.”

With that dramatic message, the first human beings were on the moon! And what had seemed like science fiction was now reality. Man had ventured 240,000 miles through outer space and landed on another planetary body.

Four days later, on July 24, the Apollo 11 astronauts splashed down in the Pacific to complete their historic mission to land on the moon and return safely to Earth.

“We choose to go to the moon” 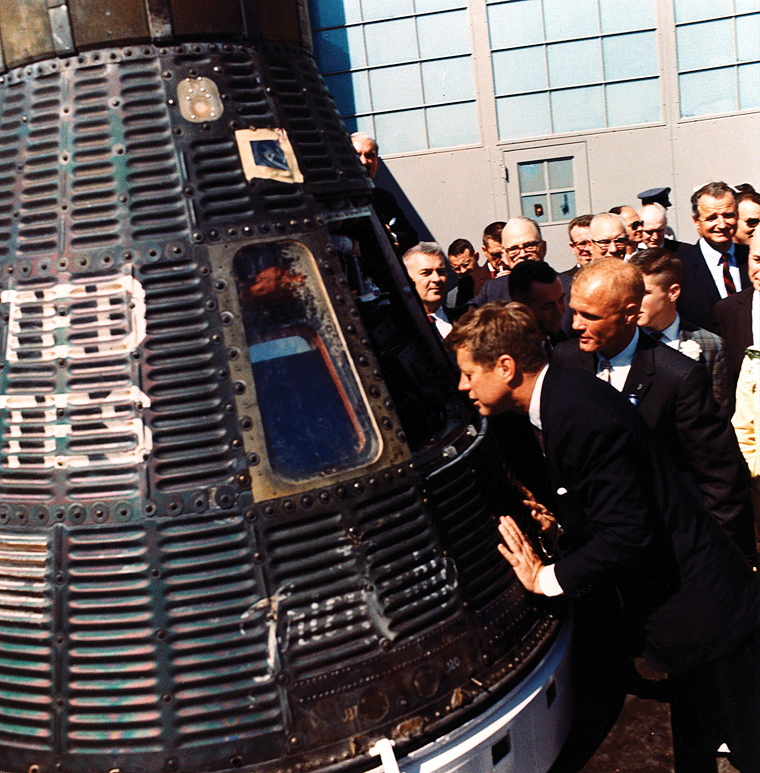 Apollo 11 fulfilled a challenge to the nation from President John F. Kennedy during the height of the Space Race in 1961. Speaking to a joint session of Congress, Kennedy called for an ambitious space program that included weather and communications satellite systems, more powerful rockets and one bold challenge.

“I believe that this nation should commit itself to achieving the goal, before this decade is out, of landing a man on the moon and returning him safely to the earth.” And though Kennedy would not live to see it happen, Apollo 11 attained his ambitious goal during July of 1969.

A stunning achievement for mankind

Apollo 11 was an amazing accomplishment for humanity and scientific endeavor. It was an event shared, experienced and appreciated equally by everyone on Earth. When Neil Armstrong came down the ladder to the lunar surface, a camera on the landing craft broadcast each step to a worldwide television and radio audience. And when he set foot on the moon, Armstrong stated: “That’s one small step for [a] man, one giant leap for mankind.” 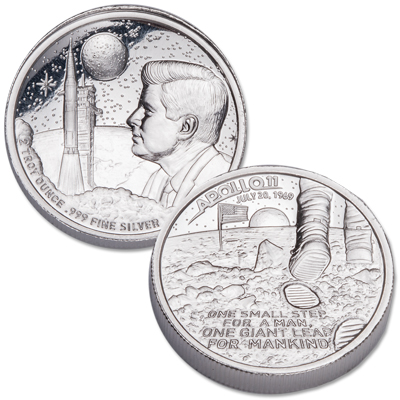 Those memorable words, human footprints and the U.S. flag are seen on the obverse of a 2 oz. high-relief silver round. The reverse depicts President Kennedy observing a rocket launch with the moon beyond.

Not long after Neil Armstrong and Buzz Aldrin put the first human footprints in the powdery lunar surface, President Richard M. Nixon described the event in a phone call from the White House to the Apollo 11 astronauts on the moon. “For one priceless moment, in the whole history of man, all the people on this Earth are truly one.”

Moments of truth for Apollo 11

You probably know the trials and tribulations of Apollo 13 if you saw the movie by that name, but you may not know some of the challenges and unknowns faced by the crew of Apollo 11…

Many things had to function properly under severe conditions. And no one knew for sure…

President Nixon had even prepared a speech in case the Eagle’s ascent engine failed to ignite. It began: “Fate has ordained that the men who went to the Moon to explore in peace will stay on the Moon to rest in peace. These brave men, Neil Armstrong and Edwin Aldrin, know there is no hope for their recovery.” 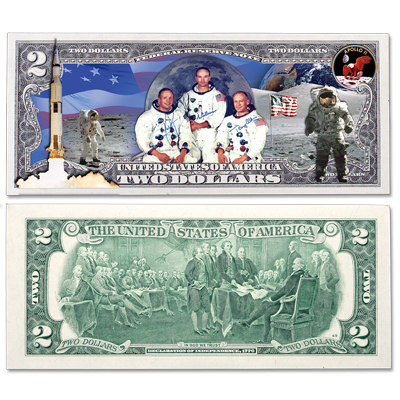 Michael Collins, the third astronaut who remained in the Command Module orbiting the moon, could only worry about his two companions. As lift-off from the moon approached for Armstrong and Aldrin, Collins wrote in a journal: “My secret terror for the last six months has been leaving them on the Moon and returning to Earth alone; now I am within minutes of finding out the truth of the matter.”

Of course, things worked out for Collins, Armstrong and Aldrin – who are featured in full color on an exclusive $2 Federal Reserve Note from Littleton. Fifty years after these intrepid astronauts first walked on the moon, Apollo 11 is being remembered and celebrated…

The U.S. Mint has honored the 50th anniversary of Apollo 11 with 3 special-issue commemoratives. The clad half dollar, silver dollar and $5 gold piece depict a lunar footprint by Buzz Aldrin on the concave obverse. The convex reverse shows Neil Armstrong, the lunar lander and the U.S. flag reflecting in the visor of Aldrin’s helmet. 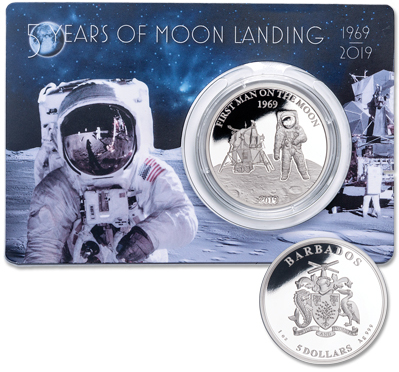 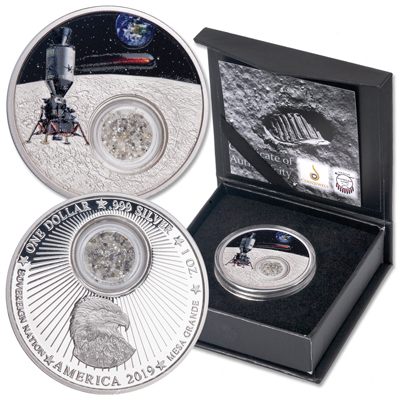 Barbados has issued a silver $5 Proof (left, top) featuring Neil Armstrong and the lunar module on the moon. Mintage is only 1,969 to commemorate the year of Apollo 11.

The Salomon Islands have kicked off a “50th Anniversary of the Moon Landing” series of silver-plated half dollars. The first issue shows an astronaut and the landing craft on the moon with colorized images of Earth and a large “50” in the background. And in the United States, the Mesa Grande Indian Nation has issued a partially colorized 2019 silver dollar (left, bottom) honoring Apollo 11 and featuring a capsule containing a full carat of uncut diamonds.

Other coins and rounds are sure to follow, as one of the greatest achievements in human history is celebrated during its 50th anniversary year!

Writer’s Note: Seeing history happen is a spine-tingling experience, and I remember watching in sheer awe and amazement as Neil Armstrong came down the Lunar Module ladder. (I also remember stoic TV anchorman Walter Cronkite removing his glasses and wiping tears from his eyes as he commented on this truly historic event.)