These beautiful coins are a great way to own precious metal, as each contains 1 oz. of 99.93% pure silver. They feature one of the most revered designs in U.S. coinage history. They enjoy the universal acceptance of an official U.S. Mint issue. And their weight and purity are guaranteed by the U.S. government. 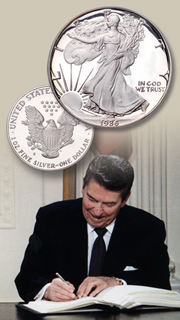 Coinage favorites that almost never were

Silver Eagles are favorites around the world today. But the legislation authorizing the coins almost died on the Senate floor. The proposal was attached to a 1985 bill authorizing U.S. commemorative coins to honor the 100th anniversary of the Statue of Liberty in 1986.

But unrelated measures were also attached to the bill. So the bill ground to a halt in the U.S. Senate. Meanwhile, time was running out to mint Statue of Liberty coins before the 1986 centennial celebration. Finally, Senate leaders managed to strip the non-coin measures from the legislation. The popular coin bill quickly passed both Houses and was signed into law by President Ronald Reagan on July 9, 1985.

From their debut in 1986 until 2005, Silver American Eagles were issued only as Uncirculated bullion coins and premium-quality Proofs. The bullion coins, which bear no mint mark, were struck at Philadelphia until 2000 when production moved to West Point. The bullion coins cannot be purchased by the public directly from the U.S. Mint. Current issues are sold through a network of authorized dealers.

Low-mintage Proofs for collectors do have mint marks. They bear San Francisco “S” mint marks from 1986-1992. Then Philadelphia “P” mint marks from 1987-2000. And West Point “W” mint marks from 2001 to the present. (None were struck in 2009 due to a shortage of silver for coin blanks.) With sharp, frosted images and brilliant mirrorlike surfaces, Proofs are the highest-quality Silver Eagles.

Key Dates sought after by collectors

You may think that Silver American Eagles are all alike. But that’s not the case. Three bullion dates and two Proof issues are especially hard to find. This is because fewer than usual were struck, or fewer coins have come back on the market. These coins command a higher premium than other dates: