The peculiar story of the Bashlow Restrikes 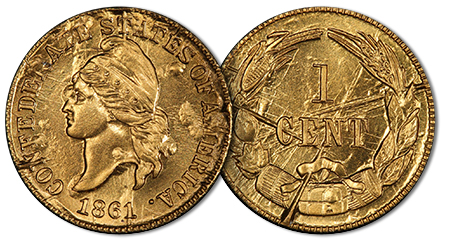 Coinage has examples of restrikes from all over the world that are highly collectible. None, however, come with as colorful and long-running a story about scarce Confederate restrikes and their adventure in Philadelphia as the so-called Bashlow Restrikes.

Shortly after the start of the Civil War in 1861, the South asked Philadelphia engraver, medal maker and die sinker Robert Lovett, Jr. to come up with a one-cent coin. Lovett said “Yes.” He designed an obverse die that featured a Capped Liberty head surrounded by the words confederate states of America. For the reverse die, he drew a wreath of southern produce around the coin’s denomination.

But after striking only 12 pieces, Lovett got cold feet. Word was going around the City of Brotherly Love that anyone found helping the Confederacy would be charged with treason. The penalty? Death!
Lovett cancelled the work order, and hid the cents and the dies in his cellar…until one day, about 10 years later. In a tavern, Lovett pulled out one of the 12 coins to pay for his drink. As many cashiers know, an odd-looking coin attracts attention. The bartender kept the unusual cent.

Before too long, Philadelphia coin auctioneer, dealer and Civil War vet John White Haseltine heard about the curious-looking Confederate cent. He bought the coin from the barkeep, and then pestered Lovett into selling him the rest, plus the dies.

See how coins are struck in this fun video by the U.S. Mint!

In the numismatic world, a pair of metal dies bearing a coin’s design are used to strike the obverse and reverse images on a blank disk (also called a planchet) to create a coin. A restrike is a coin design, usually struck later than indicated by its date, sometimes with different dies.

In 1874, Haseltine proceeded to strike one-cent coins using Lovett’s Confederate dies and sell these restrikes to collectors: 7 were struck in gold, 12 in silver, and 55 in copper. In 2015, a gold Haseltine restrike fetched $76,375 at auction in California. But long before that, Haseltine’s fortunes had run out. The Confederate dies’ collar broke after striking the 55th copper cent. After a while Haseltine – and the dies – faded from the Philadelphia coin scene. Haseltine died in 1925, at the age of 87.

Decades passed. Sometime in 1961, the now-rusted dies found their way to coin dealer Robert Socrates Bashlow of New York. Bashlow took the dies to August C. Frank & Company, a Philadelphia firm that specialized in making medals. Together, they worked on a special process to transfer the Confederate coin designs to new dies.

Next Bashlow had the dies tested on several metals. Just 50 pieces of each of the first six test metals were ever struck, or 300 coins: nickel-silver, lead, zinc, red fiber, tin and aluminum. The seventh test metal was bronze – and the one Bashlow wound up using to restrike 20,000 of Lovett’s original one-cent design for the Confederacy. The following year, in 1962, Bashlow donated the dies to the Smithsonian and sold most of his Confederate cents to collectors. 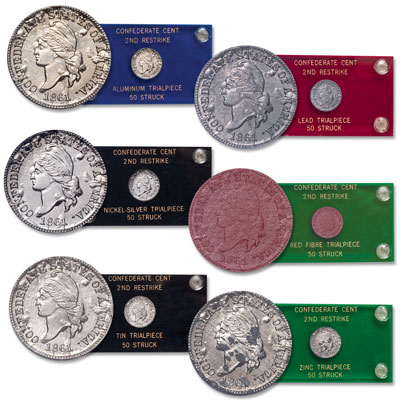 You might think that’s the end of the story about these Confederate restrikes. But thanks to a fortunate purchase by Littleton Coin Company President David Sundman, the Confederate restrikes in two sets each of the six rare, test metals are now available to collectors. Littleton Coin Company also has on hand, some of the more affordable bronze one-cent restrikes. Sometimes viewed as a quirky collectible, restrikes do come with some history-worthy tales. Isn’t the retelling of those stories part of the fun of collecting?

How Coins Are Minted

Want to view a documentary approach to how coins used to be struck? Take a look at this video clip from “American History TV” produced by C-Span 3. It features the historic Carson City Mint in Nevada that closed its doors in 1893, but operates now as a museum.