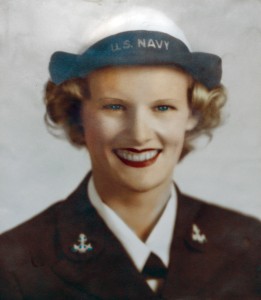 As a Navy WAVE during WWII, my mother operated a Link Trainer – a mechanical flight simulator that taught pilots aircraft controls and instrumental flying on the ground before in-flight instruction began.

During this year’s 70th anniversary of the end of WWII, I’m reminded of the emergency wartime money that contributed to the great Allied victory. Steel pennies saved copper for the war effort, silver 5¢ coins saved nickel, and special paper money was issued for both defensive and offensive purposes. Now sought-after collectibles, this emergency wartime money is of particular interest to me because my father and mother, both of my uncles, and a grandfather all served in the military during the Second World War. And I was introduced to the special-issue paper money long before I came to work for Littleton Coin Company!

Was Hawaii soon to be invaded? 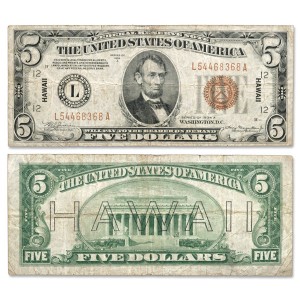 “Hawaii Notes” have distinctive brown seals and serial numbers, and HAWAII overprints vertically on each side of the face and in large block letters across the back.

When a strike force of over 350 Japanese bombers, fighters and torpedo planes attacked the U.S. naval base at Pearl Harbor on December 7, 1941, there was genuine fear that the Hawaiian Islands would become the target of a full-scale invasion. So the U.S. government authorized the Treasury Department to issue special currency in Hawaii, and to ban the holding or use of regular U.S. currency in the islands after August 15, 1942. The Hawaii Emergency Notes were created from $1 Silver Certificates and $5, $10 and $20 Federal Reserve Notes – which were given unique brown Treasury seals and serial numbers, as well as HAWAII overprints on each side of the face and in large block letters across the back.

The easily distinguished currency could be declared worthless if large quantities fell into enemy hands. And it was the only legal paper money in the Hawaiian Islands until October 1944 – when restrictions on the use of regular U.S. currency was lifted. Printed in very modest quantities, the unmistakable Hawaii bank notes have great historical appeal. Our family scrapbook of WWII photos, medals, newspaper clippings and other memorabilia includes a $1 brown-seal Hawaii note – which shares a transparent currency page in the scrapbook with a $5 yellow-seal North Africa note issued under different circumstances and discussed next…

A second type of special wartime currency was issued in 1942 for Operation Torch – the Allied invasion of North Africa, which was occupied by German and Italian forces including the highly skilled panzer divisions of General Irwin Rommel (the “Desert Fox”). Torch was planned and directed by Allied Commander Dwight D. Eisenhower, and involved amphibious landings at three sites – Casablanca in Morocco and Oran and Algiers in neighboring Algeria. It was a critical step in Allied strategy to defeat the Axis Powers in Europe, as the plan was then to invade Sicily and Italy from North Africa (which they did) – and gaining control of the Mediterranean Sea for movement of Allied troops and supplies.

When U.S. forces hit the North African beaches during Operation Torch, they carried special currency which could be easily identified and demonetized if large quantities fell into the hands of the Axis Powers. Created from $1, $5 and $10 Silver Certificates with Julian-Morganthau signatures, the North Africa notes featured unique yellow Treasury seals. After Operation Torch, the yellow-seal North Africa notes were used during the Allied invasions of Sicily and Italy. The $5 issue in our family scrapbook was contributed by a late uncle who flew bombing missions into Germany during WWII and often encountered the yellow-seal notes on his base in Italy. He and many fellow pilots brought back yellow-seal notes as mementos of their wartime service. 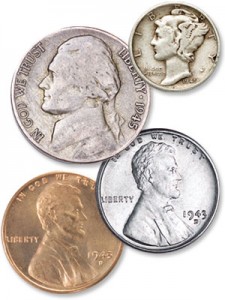 Another way to honor the great Allied victory during this year’s 70th anniversary is with historic 1945 U.S. coins – including 1945 Lincoln cents made from recycled shell casings to save copper for ammunition and 1945 Jefferson wartime nickels struck in a 35% silver alloy to save nickel for armored equipment.

Do you collect these special WWII issues or enjoy regular coins or currency issued during WWII? Please share your interests with our other readers…