You may know that a U.S. Army commissioning ceremony includes taking the oath of office and receiving second lieutenant shoulder boards. But you may not know that the exchange of a silver dollar plays an important role in the ceremony. I was not aware of the “Silver Dollar Salute” until recently. I heard about it from Littleton Coin Company manager, Kelly, and her stepson Robert, who was recently commissioned as a U.S. Army officer.

Becoming a leader of soldiers

A commissioning ceremony is the culmination of years of study and training. It marks the transition from officer trainee to leader of soldiers and results in a cadet becoming a commissioned officer. This is also when new officers present a silver dollar to the enlisted service member who gives them their first salute as an officer. It acknowledges the respect due the new rank and position. The first saluter is typically the person who provided the most help and support throughout the officer training program. 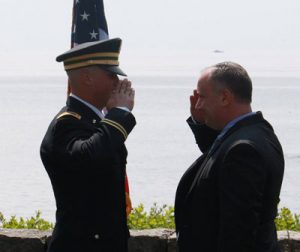 Robert receiving his first salute as an officer.

The “Silver Dollar Salute” is a revered tradition dating back to the 19th century. The coin presentation is a token of appreciation for the enlisted member’s guidance and mentoring. The coin recipient will then follow the military career of the newly-commissioned officer. In the event the officer should reach the rank of general, the enlisted service member will give the silver dollar back to symbolize completion of the cycle of leadership.

Robert, who is seen here in photographs from his ceremony, was recently commissioned as a second lieutenant in the U.S. Army after completing the ROTC program at Endicott College in Beverly, Massachusetts. The ceremony took place at the seaside college’s Misselwood property, featuring beautiful lawns and gardens, as well as breathtaking views of the Atlantic Ocean. 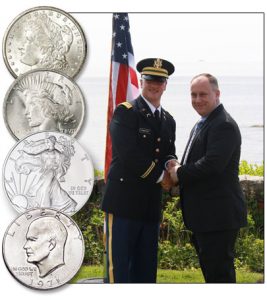 Robert is seen taking the U.S. Army oath of office. It includes these well-known words… “I will support and defend the Constitution of the United States against all enemies, foreign and domestic…” After the pinning of his second lieutenant shoulder boards, Robert receives his first salute as a commissioned officer from Master Sergeant Steven Degnan. He then presents a silver dollar to the noncommissioned officer as he shakes his hand.

Historic 1878-1921 Morgan silver dollars or 1921-1935 Peace silver dollars are often used as the coin of exchange during commissioning ceremonies. However, some cadets may choose to present an American Eagle silver dollar of 1986 to date containing one ounce of 99.93% pure silver. Or one might choose a less expensive 40% silver Eisenhower dollar of 1971-1976.

“The ceremony is a very meaningful one,” Robert emphasized. “It wraps up all the hard work that we have done over the four years in ROTC. It also gives us the opportunity to recognize somebody that helped us get to that point. The ceremony as a whole marks an introduction into the Army. The transferring of the coin and receiving our first salute marks our first sign of legitimate authority as a new leader in the military.”

Have you or a friend or relative seen or participated in a “Silver Dollar Salute” at a commissioning ceremony? Please share your thoughts and comments about this time-honored military tradition.