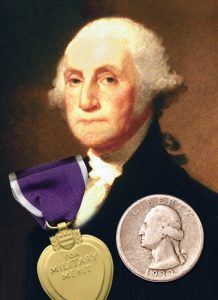 Washington’s Birthday in 1932 was a momentous occasion. Not only was it the 200th anniversary of Washington’s birth, it was also the date that the Purple Heart was reinstated. This military honor is issued to those who are killed or wounded while serving our nation. Originally, the award had been created by George Washington himself to honor those who had performed meritorious service during the American Revolution.

Yesterday, we celebrated Presidents’ Day here in the U.S.! Regardless of your political affiliation, this holiday is one with a noble history. It got its official start in 1885, when the holiday was established to celebrate the birthday of our first president, George Washington.

But people had begun honoring Mr. Washington long before then. Unofficially, the “holiday” began in 1800 – a mere two months after his passing. Even then, George Washington was admired as a notable figure in our nation’s history.

In fact, when his birthday became a federal holiday in 1885, it was only the fifth date to receive that honor (behind Christmas, New Years Day, Fourth of July and Thanksgiving).

Then, in 1971, President Nixon signed the Uniform Monday Holiday Act into law. This served as a way to offer more three-day weekends to American workers. It also moved the celebration of Washington’s birthday from February 22 to the third Monday in February. 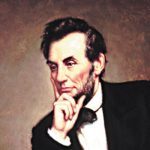 This shifted the date of the holiday to fall more “in between” the birthdays of Washington and Abraham Lincoln (who was born on February 12, 1809). Though the holiday was still officially called “Washington’s Birthday,” the public began thinking of the holiday as more of a “Presidents’ Day.”

An honor for all

As a result, even though the holiday wasn’t officially called Presidents’ Day, many began associating the day with two of our most revered commanders-in-chief. Over time, the meaning of the holiday has shifted to celebrating all U.S. presidents who have served our nation. By the early 2000s, up to half of the states in the union had changed the holiday on their calendars from Washington’s Birthday to Presidents’ Day.

But at its core, this holiday officially remains a celebration of Washington’s birthday.

Of course, coin collectors like us have a unique opportunity to celebrate our nation’s presidents. Abraham Lincoln has been honored on the cent since 1909. Thomas Jefferson is on the nickel, Franklin D. Roosevelt is on the dime and John F. Kennedy is on the half dollar. George Washington’s profile has graced the quarter ever since 1932 (including newer Statehood quarters, D.C. and U.S. Territories quarters and National Park quarters).

And we can’t forget the Presidential dollar series, created as a tribute to our nation’s highest office holders.

Regardless as to who sits atop your list of favorite U.S. presidents, this patriotic holiday is a fitting celebration honoring those who have led our nation.