A rare gold medal taken to the moon by Neil Armstrong sold for over $2 million on July 16, 2019. This was 50 years to the day after Apollo 11 blasted off on its epic journey!

One of only 3 gold medals made

The medal realized $2,055,000 in an auction sale of items from the Armstrong Family CollectionTM. It was one of only 3 official Apollo 11 gold medals – minted exclusively for crew members Neil Armstrong, Buzz Aldrin and Michael Collins. On July 20, 1969, Armstrong and Aldrin became the first men to walk on the moon. 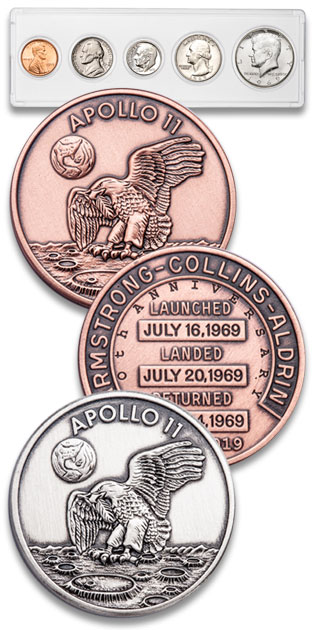 Littleton is offering copper and silver-plated reproductions of the Apollo 11 mission medal.

Mission medals for astronauts and support staff only

The Apollo 11 gold medals and a larger number of silver medals were minted under official sanction by Robbins Co. of Attleboro, MA. Starting with Apollo 7 in 1968, the Robbins company struck 14k gold and sterling silver medals for each of the 12 manned Apollo missions. Known as Robbins Medals, they were often astronaut designed and available only to crew members and support personnel. The Apollo 11 medal was based on a concept by Michael Collins, who piloted the command module Columbia.

The obverse of the Apollo 11 Robbins Medals features the mission insignia of an eagle landing on the moon with Earth in the background. The reverse bears the last names of the crew members along with the dates of the launch, lunar landing and splashdown.

The dies for these 50th anniversary medals were created from the dies for the original Apollo 11 Robbins Medals that flew in space on that historic mission.

It’s a unique and exciting way to honor one of the greatest achievements in human history!