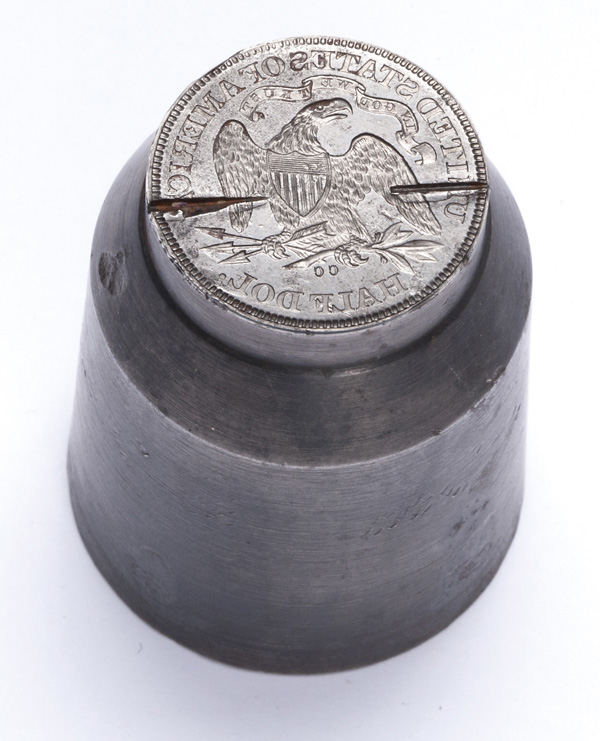 Rare canceled “CC” die was once used as a doorstop!

Everyone dreams of discovering treasure in their basement, attic or barn… I know I do! In fact, there are dozens of TV shows that highlight finds. A real life “treasure” story unfolded this year as I researched the background of a “CC” die Littleton owns… one that had helped out an elderly lady and led to the discovery of a rare Carson City die… it all began in 2003.

During a “discovery day” run by Holabird Western Americana Collections, a Virginia City, NV family brought in a piece of metal that had been used as a doorstop for generations in their home. They thought it might be worth something and hoped to raise money for the elderly family member who owned it.

That doorstop turned out to be a “CC” Carson City reverse die for the Liberty Seated half dollar. When the Holabird staff asked the lady how she acquired it, she said it had been her grandfather’s. Although no notes or letters survived, it turned out her grandfather was an assayer who eventually went to work for the Carson City Mint. Upon learning what the experts thought their “doorstop” – the CC die – could go for at auction, the family couldn’t believe it, and eventually decided to auction it.

To protect the elderly lady’s identity, the December 2003 auction catalog originally described the Liberty Seated “CC” reverse die as being consigned by a woman related to an assayer unaffiliated with the mint. The lot described the die as “circa 1875,” the only known lightly-canceled “CC” die. At that time, all that was known was that it was used by the Carson City Mint to strike Liberty Seated half dollar coinage.

Fred Weinberg, author of several error coin books, wanted the “CC” die. As an error specialist and dealer, his interest seemed unlikely, but as he explained it; “… I’m always interested in Carson City Mint ephemera – mint receipts, canvas bags, old photos and dies, etc. You don’t get the opportunity to purchase U.S. coin dies with the design showing very often, so that auction in Reno, NV piqued my interest… that, plus the fact that it was a “CC” die.”

Rusty Goe, a long-time collector of Carson City coins and author of several books on the Carson City Mint, wanted to display the “CC” die in his Reno store. He said, “I was there at that auction in 2003… I figured it would be a simple thing to win the die … not too much competition. Boy was I wrong! There had never been a die like that at auction, I figured it would go somewhere between $6,000 and $7,500 … then it went to $10,000, and the person (a phone bidder) I was bidding against kept bidding. I thought to myself: ‘What’s going on here?’ …I didn’t find out who bought it until much time had passed.” The Liberty Seated CC reverse die eventually went for $18,975 and the family was ecstatic. The money helped out the elderly lady who needed it… but the story doesn’t end here…

Dealer Fred Weinberg had bought the die, and a few weeks later in January 2004, Littleton’s president David Sundman spotted it in Fred’s case as he unpacked it at a show. As David explained it, “I bought the die on instinct for Littleton. I was attracted to it partly because I’ve always liked Carson City coinage and the stories. I had the vague idea that it would make a nice display item, there not being many canceled U.S. Mint dies in private hands…” 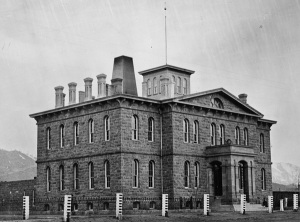 As David put it, “After hearing Bill, I decided to send him a photo of our die and asked him if he could determine the year it was used.” It turned out that Bill had seen pictures of this particular half dollar die in 2003, and wondered where it ended up (it hadn’t been offered for sale in 10 years). Recalling how he felt when he finally examined it, he said, “I’d only seen pictures in the auction catalog, so when I got to examine the real thing… Oh my gosh, was that a treat! I knew right away what it was!”

Bill studied the die early in 2014 and found it had the large-size “CC” Carson City mint marks. The position of the large Cs determined it was Reverse A from the WB-1 (die pair 1-A). On this particular reverse, the second “C” is slightly lower than, and further away from the first. (In that era, the “CC” was punched by hand into the working die.) Plus, it had clash marks on the inside lower right of the shield. Those distinguishing characteristics meant it was the FIRST half dollar reverse die, one of 3 used in 1870. Further study revealed its diagnostics matched reverse die A, used only in 1870 with die pair WB-1 and never again – an unexpected discovery!

“… A Wonderful piece of History!” 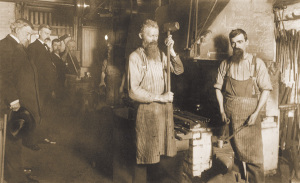 According to Carson City expert Rusty Goe, coin dies “aren’t supposed to survive.” Branch mints were required to ship the dated side back to the main mint in Philadelphia each year. But to save shipping costs, Carson City and San Francisco had obtained permission to destroy their own dies. Unused dies without dates (reverse dies) in good condition could be kept for later use. At the Carson City Mint, dies that were no longer usable were normally canceled by making an “X” through the entire design using a chisel. However, Littleton’s die only has two chisel cuts on either side of the outer portions (instead of the prominent X through). This left much of the eagle untouched.

After Fred Holabird revealed the die had come from the elderly Virginia City, NV woman, he went on to say “Given the locale – only a few miles from Carson City – I had always hoped more like this one would appear. None did. Five dies from the dump discovery were auctioned. Those were in pretty good shape, but harshly canceled. I think that the assayer planned to take that die home because it’s lightly canceled – he probably purposely canceled it that way.” Speaking about Littleton’s 1870-CC half dollar die, Bill said, “I’ve seen a lot of canceled dies because of my research… there’s a Morgan dollar die at the New Orleans Mint [like Littleton’s] that’s lightly canceled… I’ve only seen two lightly canceled like that. It’s a wonderful piece of history.”

The collecting community gained the first-year 1870-CC Carson City reverse die, and I got a fascinating behind-the-scenes story to share with you – all possible because the Virginia City family decided to take their “old doorstop” to a “discovery day.” The Carson City die and an 1870-CC Liberty Seated half dollar it struck are now on display at Littleton Coin Company – check it out if you visit! 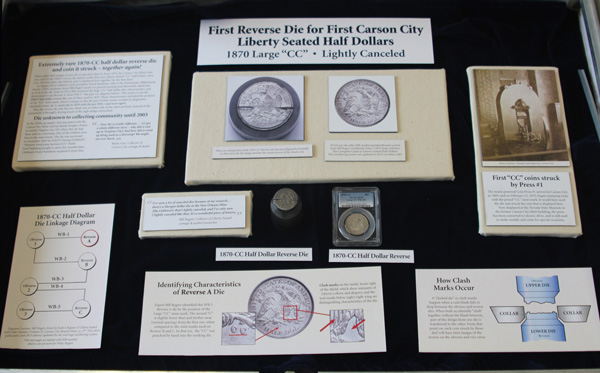