High-quality Proof coins are minted in limited quantities for collectors. They feature extra-sharp designs and pristine background surfaces. People love collecting Proofs because of the quality of each coin.

Made by a special process

The term “Proof” refers to how the coin is made – not its condition. Proofs are created with highly polished dies and coin blanks. The blanks are hand fed into a specially adapted coin press. Each blank is struck at least twice – at slow speed and with extra pressure. Proof blanks and struck pieces are carefully handled with gloves to avoid fingerprints, contact marks or other blemishes.

The methods and technology of Proof production have changed over time. Which has changed the appearance of Proof coinage over time… 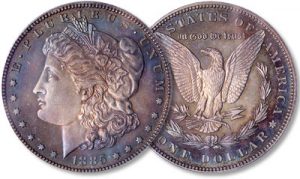 Proof coins struck before 1900 feature a handsome contrast between design elements and background surfaces. Dies used to strike Proofs were carefully polished on their higher flat surfaces (which create the flat background on the coins). Design images and inscriptions, which are recessed on the dies, were left alone. This resulted in brilliant, reflective flat surfaces and a duller finish on images, letters and numbers.

The contrast between design elements and the background was increased by immersing the die in acid. This gave the entire die a frosty finish, until the higher flat surfaces were polished to remove the frosty appearance. This technique produced the “Frosted Proof” finish.

The era of Brilliant Proofs 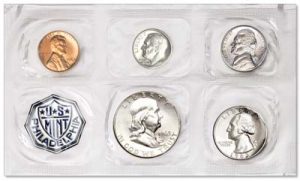 “Brilliant Proofs” are created when all surfaces of a die are highly polished. This creates a brilliant, mirrorlike finish on all parts of the coin. Brilliant US Proofs were struck from the 1930s to the early 1970s. The coins in the 1960 Proof Set and 1963 Proof Set are all Brilliant Proofs.

Two other techniques used in the past were the Matte Proof and Sandblast Proof. Developed about 1900, these methods created a dull to grainy finish on entire U.S. Proof coins.

The matte finish was apparently created by immersing struck Proofs in diluted acid. The rougher sandblast finish was created by spraying struck Proofs with a stream of fine sand in compressed air. Matte and Sandblast Proofs enjoy greater popularity among collectors today than they did during their years of issue. 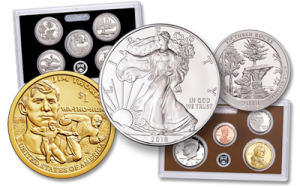 Most Proof coins since the late 1970s, have a “Frosted Proof” finish. Satiny, frosted design elements contrast with brilliant, mirrorlike backgrounds. This is achieved by immersing the die in an acidic solution to give the entire die a frosty finish. The higher flat areas are then carefully polished to create reflective, mirrorlike fields on the coins. This dramatic cameo contrast is seen on most modern U.S. Proof coins. 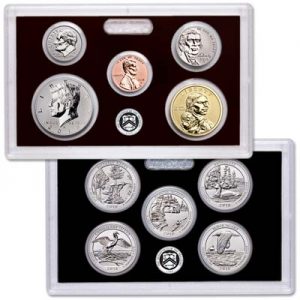 Reverse Proofs feature an opposite contrast between design elements and flat surfaces. Images and inscriptions have brilliant, reflective finishes. And the flat surfaces feature a satiny, frosted appearance.

The U.S. Mint has created a number of Reverse Proofs for special occasions. A complete 2018-S Silver Reverse Proof Set was issued for the 50th anniversary of Proof coin production at the San Francisco Mint.

Since 1992, the U.S. Mint has struck both copper-nickel Proof and silver Proof dimes, quarters and half dollars. While silver Proofs from 1992-2018 were struck in 90% silver and 10% copper, all silver Proofs as well as all commemorative silver dollars beginning in 2019 are being struck in 99.9% pure silver.

The pinnacle of the minter’s art

U.S. Proof coins represent the finest craftsmanship of the U.S. Mint. They’re struck in limited quantities for collectors and sealed in special mint packaging. It’s no wonder that Proof coins are such a popular part of the collecting hobby!