We all know about mint marks. On a US coin, it’s the tiny letter that indicates the minting facility (except for “no mint mark” coins from Philadelphia). But a privy mark is different. This symbol adds an extra level of uniqueness to a coin. 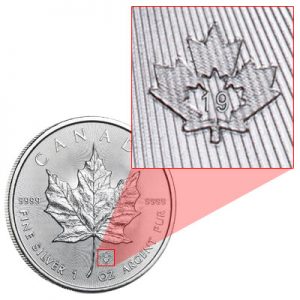 In modern times, privy marks have begun appearing on world silver issues. For more than 20 years, Canada’s beloved Maple Leaf coins have featured a variety of privy marks. The most common is the one shaped like a tiny maple leaf featuring the last two digits of the year.

To mark the 75th anniversary of D-Day in 2019, a beautiful $10 coin was issued by the British Virgin Islands. The reverse of that 1 oz. silver issue featured a paratrooper privy mark with the 1944 date. But until recently, there were no US coins that displayed a privy mark…

The start of something new…

In a September 27, 2018 meeting about the new US Innovation dollars, the Citizens Coinage Advisory Committee (CCAC) had a lively discussion about possibly adding a privy mark to the series. Several committee members felt that a privy mark would be a great addition. However, they were unable to come to a consensus on what that privy mark should be. Different ideas – including a smaller image of the Patent Office emblem – were debated. Ultimately, the topic was tabled for that meeting.

When the first US Innovation dollar design debuted at the end of 2018, the introductory reverse design did feature a connection to the Patent Office. A fascinating bit of history, sure – but not a privy mark. 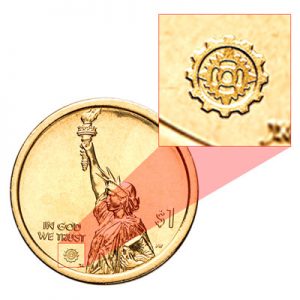 Then, in 2019, a curious thing happened. Each US Innovation dollar design from that year displayed a new emblem on the obverse, below the motto in god we trust. We had our first privy marks on circulating US coins!

This tiny symbol – a stylized gear – represents industry and innovation. It appears as though this privy mark will be on the obverse of each US Innovation dollar coin from 2019 through the end of the series in 2032.

In 2020, US Innovation dollars won’t be the only coins “privy” to these marks! To honor the 75th anniversary of World War II’s end, special-issue National Park quarters are being released. In addition to the standard coins, each of the year’s five designs will be struck at the West Point Mint bearing the “W” mint mark, along with a special privy mark on the obverse. The mark will be to the left of Washington’s profile, above the word liberty. Its outline is in the shape of the pool at Washington, D.C.’s National World War II Memorial.

Are privy marks the wave of the future in US coinage? What coin would you like to see sporting a privy mark, and why? I’d love to hear your thoughts in the comments below!