Let’s take a look at two completely different coin series. They’re issued 80 years apart. One’s a classic nickel, the other a modern dollar. What could they possibly have in common?

Turns out, more than you’d think.

When the U.S. Mint unveiled the design for the initial 2018 U.S. Innovation dollar, collectors everywhere began admiring and studying the design. The official description sheds some light on the design elements that went into its creation:

Fraser: the man behind the designs

Born in 1876 in mid-western America, Fraser grew up surrounded by Native American life and culture. This would have an impact on much of his life’s work. Aside from the Buffalo nickel, Fraser’s Western influences also shine through in his sculpture End of the Trail and his design for the reverse of the Oregon Trail commemorative half dollars of 1926-1939. (His wife, Laura Gardin Fraser, designed that coin’s obverse.)

But what about the eagle just above american innovators? Little was said about that element on the reverse. It shows an eagle perched on an angled shield, with tools scattered beside it to symbolize innovation.

This symbol has an important connection to the history of American innovation! It’s based on a bas-relief found on the exterior of Washington, D.C.’s Herbert C. Hoover Federal Building. Home to the Department of Commerce, this building was constructed from 1929-1932. The original sculpture displays the date 1802 above, honoring the year the U.S. Patent Office became a separate government entity. Below, the words patent office identify what the sculpture represents. It’s a fitting connection to American innovation!

But that’s just the half of it… for coin collectors, the symbolism gets even better! 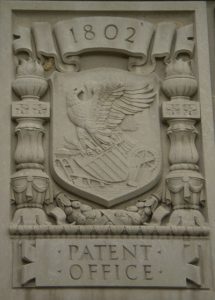 The figures shown on the Hoover Federal Building’s 15th Street façade were sculpted by none other than James Earle Fraser. That’s right – the same person who designed the beloved Buffalo nickel also designed the bas-relief tribute to the Patent Office on a federal building in D.C. And now, his design appears on the reverse of the 2018 U.S. Innovation dollars as well!

Struck from 1913-1938, Fraser’s nickel design has been hailed as “uniquely American.” With the Native American profile on the obverse, and the buffalo reverse, it’s an excellent reminder of our nation’s heritage. 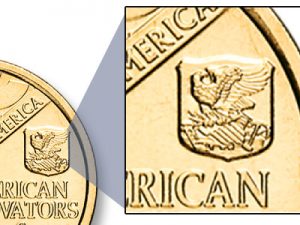 The eagle emblem on the reverse of the 2018 American Innovation dollar (above, bottom) is styled after Fraser’s bas-relief on the Hoover Federal Building in Washington, D.C. (above, top)!

Once again, another of Fraser’s classic designs is making an appearance – this time, on a modern U.S. coin. It gives the first U.S. Innovation dollar an exciting and historic tie to America’s coinage past!