Just 6 more coins to go and the Presidential dollar series will be finished. The U.S. Mint released designs for the last 6 coins, and as of mid-December, Ronald Reagan wasn’t among them. Without the Reagan addition, the last dollars will be released mid-way through 2016 – signaling the end of this historic series.

Statue of Liberty reverse – a stroke of genius

These coins have clearly had their fans and foes… On one side, there are people who love the patriotic designs and the history, and on the other, there are those who call the designs uninspired and complain of collecting fatigue.

Which camp are you in? For my part, I think most of the portraits have done a good job capturing presidential likenesses and the Statue of Liberty on the reverse is, to my mind, a stroke of genius! It shows one of America’s greatest icons – one that’s not often used on coins.

I collected some of the early coins of the series and didn’t keep going, but the 2015 & 2016 dollars have sparked my interest again. Now I know most people either collect by date and mint mark or set aside one of each design, but I plan to do it a bit differently… While it isn’t a traditional way to collect, I think because their Presidential portraits recall various events in our country’s history, Presidential dollars offer a lot of ways to form a collection that highlights events in your life.

I was in grade school in a grades 1-4 schoolhouse when JFK was assassinated. Back then, classrooms didn’t have TVs and desktop computers hadn’t been invented. When the president got shot in Dallas, the lady who lived next to the school came over to tell us. Like many, I remember where I was and what I was doing that day. So I thought I’d make a collection with Kennedy Presidential dollars, half dollars, graded school memorabilia, period postcards, a 4¢ Mercury stamp and other space-themed stamps, newspaper clippings and black and white photos. 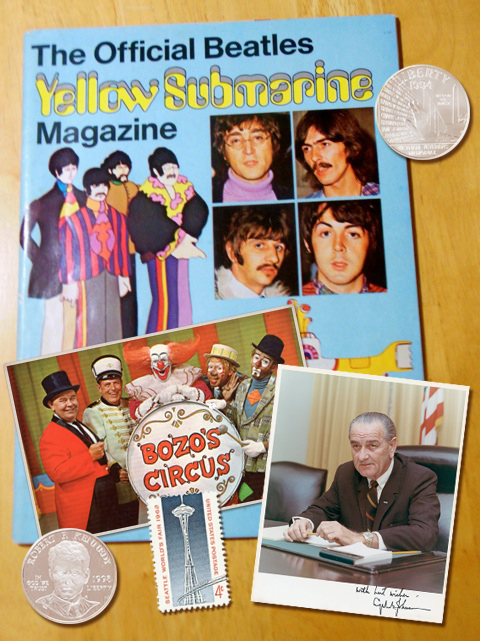 The 2015 LBJ Presidential dollar will be the perfect addition to the writer’s nostalgic collection. It features Robert F. Kennedy and Vietnam War Memorial commemorative coins and other fascinating memorabilia.

And, I’d do the same for LBJ (Lyndon Baines Johnson), but I would use some Beatles items. I’d include a couple 45 records (remember those?), my Official Beatles Yellow Submarine magazine from 1968, postcards, stamps and photos. Plus, I’d include commemoratives for the Vietnam Veterans Memorial, Robert Kennedy and Civil Rights Act.

Does either one of these 2015 Presidential dollars appeal to you? What would you put in your collection? Beatles, Elvis, dog tags, pictures of your first car or other photos…

So no matter what your taste is – date and mint mark, year sets, or something more personal, the Presidential dollar series has something for everyone, and if you haven’t started collecting it, it’s not too late.

Update: We just received word that on February 12th the U.S. Mint announced they are working on designs for a Reagan Presidential dollar and Nancy Reagan $10 gold coin. I might have to add this president from the ’80s to my collection!