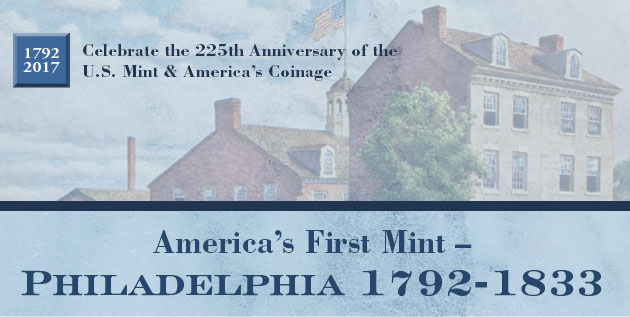 As the Philadelphia Mint celebrates its 225th anniversary this year, it’s a good time to recall the significance of our first mint and the involvement of first President George Washington…

The Coinage Act of 1792, commonly called “the Mint Act,” authorized the construction of a U.S. Mint in Philadelphia – the federal seat of government at the time. It also established our decimal coinage system based on the dollar. Much of American commerce was relying on foreign coinage in circulation at the time. So official U.S. coinage was urgently needed for standardized currency. The Mint Act was signed into law by first President George Washington, who took a keen personal interest in our national coinage. He became a regular visitor at the mint.

First federal building to be constructed

The original U.S. Mint, erected on Seventh Street in Philadelphia, was the first federal facility built by authority of the U.S. Government. The plant consisted of a smelt house, mill house and 3-story main building containing the coin presses, vaults and offices. The main structure was the tallest building in Philadelphia at the time.

President Washington selected eminent scientist and engineer David Rittenhouse to be the first director of the U.S. Mint. He appointed noted instrument maker and machinist Henry Voigt to be the mint’s first chief coiner. Both men had produced weapons, ammunition and other critical military equipment for General Washington’s Continental Army during the Revolutionary War.

Deciding on designs for U.S. coins 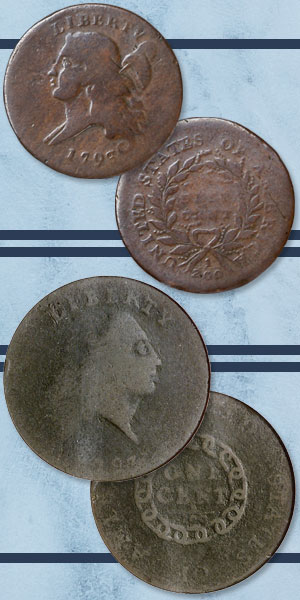 Some U.S. congressmen wanted to put George Washington’s likeness on the new national coinage. He was certainly considered a national hero for his leadership both on the battlefield and as first U.S. president. But Washington did not want our coinage to resemble European coins that depicted and promoted the reigning monarch. He preferred images more representative of our democratic form of government.

So the 1792 Mint Act called for an image “emblematic of liberty” on the obverse along with the year of issue. The word “Liberty” was included on larger coins. It required the reverse to feature the bald eagle as our national emblem and the inscription united states of america.

The first coinage produced by the U.S. Mint were some experimental silver half dimes in 1792. According to legend, the trial pieces were struck from silverware donated by Washington to the mint and melted down for the purpose. The first coins issued for circulation were pure copper “large cents” and half cents minted in 1793. Circulating silver coins were introduced the following year in 1794 and gold coinage made its debut in 1795.

Early U.S. coins were produced with a screw press operated by 2-4 men. Turning the screw with large overhead arms brought the obverse die down upon a softened coin blank as it rested on the reverse die. So the screw actually “squeezed” or “pressed” the obverse and reverse designs onto the coin blank. When steam presses were introduced during the 1830s, the dies came together with such speed and force that the designs were essentially “struck” onto the coin blank rather than “pressed.” However, even today’s high-speed electric and hydraulic machines which produce hundreds of coins per minute are known as presses. 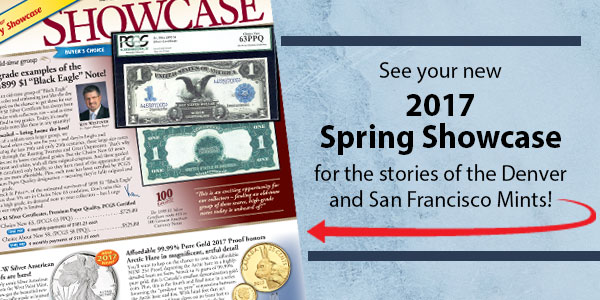 You can read the exciting stories of the Denver and San Francisco Mints – established following the discovery of rich gold deposits in Colorado and California. These branch U.S. Mints, which remain in full operation today, played important roles in America’s Westward Expansion and the development of commerce in our western states.

What a difference 225 years make!

Coin designers and die makers at the first U.S. Mint would never have imagined modern coins like National Park quarters, Presidential dollars and Native American dollars which have featured new designs for each year of issue. During the 18th and 19th centuries, the same or very similar designs were shared by several different coin denominations! We’ve come a long way since the Mint Act signed into law by the legendary leader known as “the Father of his Country.”

Please share your thoughts and comments about the U.S. Mint and its progress since inception with our other readers.