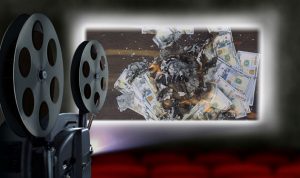 Money in movies… it’s everywhere! But did you ever stop to wonder where it all comes from? Sure, it makes a fantastically dramatic scene when billions of dollars rain down after they’re dropped from a rooftop or blown out of the back of an armored vehicle, or when a “bad guy” lays down on a bed of $100 bills.

But even with a production company’s vast budget, it’s difficult for one to withdraw from a bank all the money needed to film a theatrical scene and hope to return what’s left later on. Because let’s face it – if it wasn’t destroyed during filming, there’s a high likelihood that the money would “disappear” before it could be re-collected!

Turns out, there are companies that produce “prop money” for use in films and videos. It doesn’t need to be perfect – and really, it shouldn’t be! – it just needs to pass as real at a cursory glance. Typically, movie prop money producers create two types of currency for movies:

Prop money printed to the letter of the law 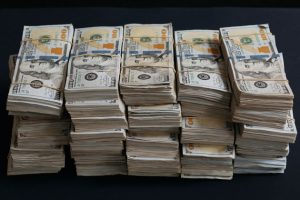 Of course, any “fake” money that’s printed for movies has to comply with the strict rules of The Counterfeit Detection Act of 1992 (there are no laws prohibiting the use of money in film). The obligation on prop money is usually printed as “For Motion Picture Use Only” or “This note is not legal tender, it is to be used for motion pictures,” while portraits, vignettes and signatures are altered or replaced completely. Any legitimate security features of real U.S. currency – like watermarks and security threads – are not reproduced on prop money.

One movie prop company based in Atlanta, GA – RJR Props and Set Dressing Services – has supplied prop money for a number of feature films and music videos. They claim that their money has never been used in a crime, though there have been some high-profile instances of other companies’ prop money being taken as souvenirs from movie sets and later passed as real.

Have you ever seen any prop money, or do you collect it? What’s your favorite movie “money blooper”? Let us know in the comments below!