Recently, I was planning a birthday party when someone asked if I’d ever heard of the “money cake tradition.”

Having always preferred chocolate myself, but intrigued by the idea, I asked her what that was!

A fun tradition for our neighbors to the north 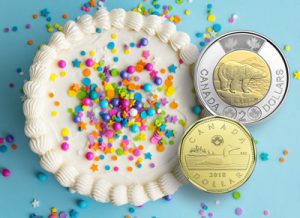 Turns out in Canada, the money cake tradition is fairly common. It’s not certain where this tradition began, and the specifics of how the cake is made and served can vary from family to family. But in the most common version of the money cake tradition, coins are baked inside of a cake – usually for a birthday, but also to celebrate special occasions like holidays, anniversaries, or graduations.

Some of the most popular coins used in Canada for the money cake tradition are “loonies” and “toonies” ($1 and $2 coins). Here in the U.S., “golden” dollars (like Native American and Presidential issues, or Kennedy half dollars) would be a perfect choice!

Turns out there’s also an earlier version of the tradition – the Greek Vasilopita. This is a bread, cake or pie served each January 1 to honor St. Basil.

According to legend, Basil was serving as archbishop of Caesarea when the emperor levied a hefty tax on the people. The tax was so excessive, citizens were forced to give up all they had – including precious family heirlooms – just to avoid debtor’s jail. Seeing this, Basil called for the emperor to repent – and he did, returning all payments to the city!

A blessing in disguise!

Unfortunately, there was no way to tell who had paid what. After praying for guidance, Basil baked all of the treasure into a large pita and invited the town to the cathedral where – after blessing the pita – he sliced a piece for each person.

The tale holds that, remarkably, every person received back exactly what they had paid in!

That’s how it’s said that the money cake tradition began. Today, it’s popular to serve vasilopita each January 1. Though each family’s routine can vary, typically the vasilopita is baked with a single coin in it. It’s sliced and served to family members from oldest to youngest, and whoever finds the coin in their piece is promised good fortune for the coming year. 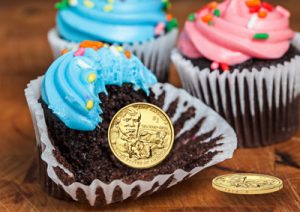 The tricky part is getting the coins into the cake. Most people have a hard time getting past the idea of coins being baked into their food! Some suggestions that are regularly tossed out there are to wash your coins before placing them in the cake batter (which, as collectors, we know that cleaning your coins is a big NO! Then again, baking coins isn’t tops on a collector’s to-do list, either…). You can also ask for newer coins from a bank.

Next, wrap the coins in an oven-safe material like waxed paper, parchment paper or aluminum foil. Mix up your favorite cake batter, and pour half into your pan. Place the coins in their oven-safe pockets throughout the batter, and then pour the remaining batter over the top and bake as usual. Voila! The coins will bake throughout the cake, creating a welcome surprise for anyone who finds one (or more!) within their piece.

Once the cake has cooled, simply frost, slice and serve. But when you do, you might want to warn your guests that a surprise awaits (a chipped tooth would certainly ruin the fun)! People of all ages will have a great time discovering the hidden treasures inside their sweet treat.

Have you ever heard of the money cake tradition before – or better yet, have you tried it yourself? What are your favorite ways to celebrate a special occasion? I’d love to hear about them below!