It was hurricane season. The voyage was stormy. The Mayflower dipped and rose with each ocean swell and gust of wind. Below the trading vessel’s deck, families huddled for safety. They were a mix of religious pilgrims and adventurers looking for a fresh start. These brave travelers were sailing west, away from England, to a continent largely unknown.

After 66 days, they saw land. According to William Bradford’s journal entry, the date was November 11, 1620. Eventually, these settlers christened their colony Massachusetts, using a Wampanoag word for large hill.

Last year, 2020, marked the 400th anniversary celebration of this historic event. Did you know you can recount it with coins? Read on to discover a beautiful selection from Littleton Coin.

If you love ships 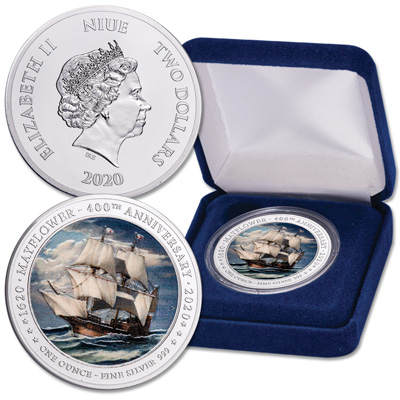 The Mayflower was a square-rigged sailing ship, weighing an estimated 180 tons. It measured about 90 feet, or the length between bases on a baseball diamond, and was about 25 feet wide. It held 102 passengers, 30 crew, two dogs, plus goats, chickens, sheep, and cats to catch mice. Initially used for European trade, it bore sails of heavy linen woven and stitched by hand.

The Mayflower was first anchored near the tip of Cape Cod where Provincetown is today. After several exploratory treks, the Mayflower was moved across the protected bay to be closer to where these settlers built on the remains of a Wampanoag village called Patuxet. They would name it Plymouth in remembrance of the port city they sailed from. 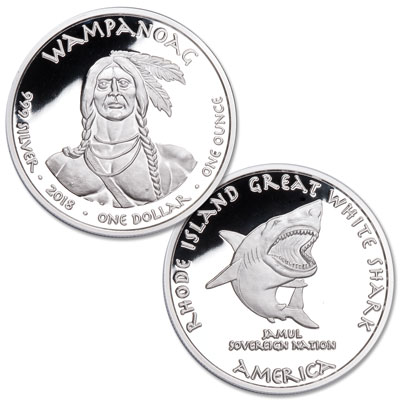 In present-day Massachusetts and Rhode Island, the Wampanoag go back more than 12,000 years. This Native American tribe established a network of 69 villages. But an earlier encounter with European explorers to Patuxet had not gone well. They were cautious about the new arrivals they observed coming ashore in 1620.

Following the harsh winter, the Wampanoag and the surviving settlers made a treaty of mutual protection in March of 1621. Neither party would harm the other. Both sides agreed to leave their weapons behind when meeting, and the two groups would be allies in times of war.

That spring, the Wampanoag showed the colonists what to plant for a fall harvest. What grew well was a trio of basic vegetables: corn, pole beans and winter squash. Native American legend refers to them as “the three sisters” because of their natural ability to grow well together. Symbolically, they are represented on the 2009 Sacagawea dollar, the first to start the annual tradition of one-year-only reverse designs on Native American coins from the U.S. Mint.

The Wampanoag and the colonists, most of whom were farmers, had ceremonies to give thanks for a successful autumn yield. In the fall of 1621, they joined together in a festival recognized today as Thanksgiving. The colony’s elected governor, William Bradford, wrote in his diary that “They began now to gather in the small harvest they had… there was great store of wild turkeys, of which they took many…they had about a peck of meal a week to a person, or now since harvest, Indian corn…”

Escaping religious persecution in England, William Bradford spent 30 years as the colony’s elected governor. He formed a participatory government that would, in the next century, influence the creation of the break-away United States of America. He welcomed non-believers who came to the fledgling colony. And he worked to establish a mutually respectful relationship between the colonists and the Wampanoag.

On the 300th anniversary of the Mayflower’s famous landing, the U.S. Mint struck a commemorative 50-cent piece in silver that payed tribute to Bradford. The governor’s profile on the obverse by Boston sculptor Cyrus E. Dallin showed him holding a bible. The reverse depicted the Mayflower on rough seas. Although 200,112 coins were minted, a large number of the Pilgrim Tercentenary Silver Half Dollar were returned to be melted. One of the surviving 100-year-old silver halves would make an excellent pairing with the 400th anniversary commemorative coin mentioned at the top og this blog.

Known for their love of gardening, the English herald the arrival of spring with sightings of a low-lying, flowering shrub known as a hawthorn. Its scented fragrance, and pink or white blossoms, signal the start of a new planting season and warmer weather. In some horticultural circles, it’s also called a mayflower.

Small wonder those early colonists, seeing the North American variant of a familiar plant from back home, named them mayflowers – or so goes the lore that sprang up from poet John Greenleaf Whitter’s 1856 poem that reads, in part: 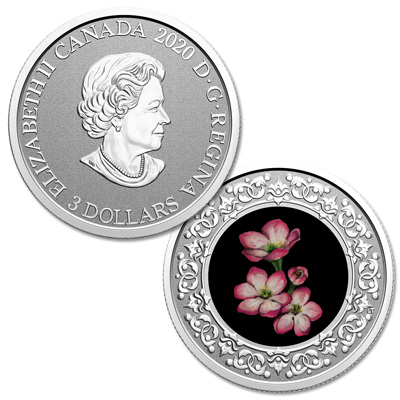 2020 Canada 1/4 oz. Silver $3 Mayflower
The Pilgrim’s wild and wintry day
Its shadow round us draws;
The Mayflower of his stormy bay,
Our Freedom’s struggling cause.

But warmer suns erelong shall bring
To life the frozen sod;
And through dead leaves of hope shall spring
Afresh the flowers of God!

Mayflowers have become a patriotic symbol, suggesting high achievement in the face of adversity. Also called trailing arbutus, it is the Massachusetts state flower.

In 2020, the Royal Canadian Mint debuted a commemorative $3 coin featuring the beautiful flowering plant as Nova Scotia’s floral emblem. Why not make this lovely pure-silver coin an accent in your Mayflower collection?!

But, truly, any one of these historical coins makes a terrific addition in an album, no matter how you choose to tell the story of this special anniversary.