If there were a Hall of Fame for U.S. coins whose “heads” have been around a really long time, the Jefferson nickel and the Roosevelt dime would take two of the three top spots – but neither denomination can hold a candle to the Lincoln Head Cent. First minted in 1909 to honor our beloved 16th president, Abraham Lincoln, it celebrates its 110th anniversary this year! With this milestone comes opportunities for new collectors to consider the numismatic merits of this hard-working coin.

Tributes connecting the new cent to Lincoln began in Congress in 1909. There, Lincoln had represented Illinois for one term in the House of Representatives from 1847-1849. On the centennial of his birth, February 12, 1909, House Chaplain Henry Couden delivered an opening prayer by asking members to recall the memory of…

“one of nature’s noblemen, a statesman, a patriot, a seer, a prophet, a philanthropist, a knight clad in the armor of righteousness, whose heart went out in love and sympathy to all men …”

Later that day, both the House and Senate passed a joint resolution declaring Lincoln’s birthday of February 12th a national holiday.

While that was happening in Washington, D.C., President Theodore Roosevelt was at Lincoln’s birthplace of Hodgenville, KY. The memorial event was the laying of the cornerstone for the granite building that would house a replica of the log cabin in which the 16th president was born.

Roosevelt considered Lincoln the savior of the Union and the greatest Republican president our nation had seen. In his speech, Roosevelt described a leader who was

“Unbroken by hatred, unshaken by scorn [who] worked and suffered for the people. Triumph was his at the last …”

Roosevelt also influenced the selection of medal sculptor Victor David Brenner’s design for a new obverse on the one cent. Putting Lincoln on the obverse in 1909 was a measure of just how far the nation had come from its early days when President George Washington refused to be commemorated on a coin. Our first president believed the practice too similar to monarchs’ profiles on European coins, which America was still using as it transitioned to independence.

Brenner’s design also had a touch of humanity. In Lincoln’s profile is the faint outline of a smile. Brenner used several different photographs of Lincoln in order to come up with a composite silhouette for the copper coin. But the one by famed Civil War photographer Mathew Brady showing the president with his young son, Tad, provided special inspiration.

“I have made Lincoln smiling,” Brenner told reporters in March of 1909, because “… when we talk to children, our faces relax and we are at our best… I finally imagined [Lincoln] as talking to a child. And that is the face on the coin.” 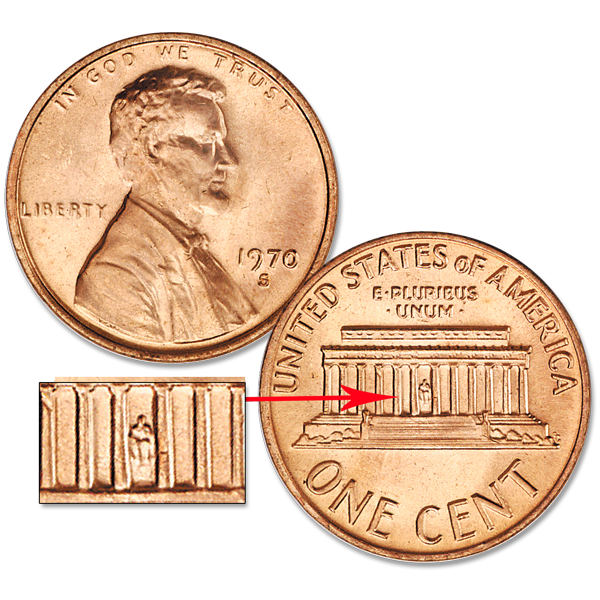 Lincoln was born in 1809. The first cent to carry his profile was struck in 1909. The next design change took place in 1959 when the mint changed the “tails” or reverse. It coincided with the 150th anniversary of Lincoln’s birth. Replacing the ears of wheat, the new reverse featured the Lincoln Memorial. Those with especially keen eyesight can see the statue of Lincoln seated between the front columns.

A new anniversary date came in 2009. The U.S. Mint chose to commemorate the bi-centennial of Lincoln’s birth and the 100th anniversary of the Lincoln Cent with a bold design decision. It issued four different reverse designs just during 2009, each featuring four stages of Lincoln’s life: the Birthplace Cent, with a log cabin design to symbolize his humble birth; the Formative Years Cent with an image of a young Lincoln, sitting on a log and reading a book; the Professional Life Cent showing Lincoln as an adult in front of the Illinois capital building in Springfield; and Presidency Cent featuring the Capitol dome, unfinished during the turmoil of the Civil War.

Many a great coin collection has started with individual Lincoln cents. Let’s face it: they’re everywhere! Littleton Coin Company has a starter kit that’s ideal for talking to a youngster in your life about this smallest of pocket change.

Littleton Coin also has created a series of four informative and individual Showpaks to tell the stories of each of the 2009-only reverse designs. A touching photo of Lincoln with his son, Tad, is the highlight of an affordable four-cent Lincoln Showpak® that makes a great gift – as well as a collectible.

Recently, we’ve noticed an uptick in collector interest in Lincoln cents — perhaps as a result of the 2019-W Lincoln Head Cent, which is the first of its kind. Are you part of this revival? Let us know in the comments section.