Lady Liberty also can be found as a 4 1/2-inch silver statue!

Lady Liberty has been an enduring symbol of America’s promise of freedom, peace, commerce and military might. Since the Coinage Act of 1792, her look has featured flowing hair, beribboned hair and hair covered by a Phrygian cap. She’s sat. She’s stood. She’s strode purposefully. She’s held a shield and she’s carried a torch.

While there are exciting contemporary interpretations still to come, there are five classic looks for Liberty sought after by collectors. Let’s examine them!

The first five-cent piece ever to feature Liberty on the obverse also comes with some controversy because of its reverse. The year was 1883. The designer was Charles Barber. And in keeping with the still-young nation’s interest in the ideals of antiquity, the reverse featured a large V, the Roman numeral for five. Missing was the monetary unit: cents. Confidence (con) men quickly discovered they could gild the nickel and pass the coins off as $5 gold pieces to unsuspecting merchants.

The US Mint quickly corrected the situation, but the one-year-only 1883 “no cents” nickels became instant collector pieces. Liberty Head nickels continued to be minted until 1912, and you can start a classic Liberty collection with a more affordable five-cent piece such as this one from this one from 1905. 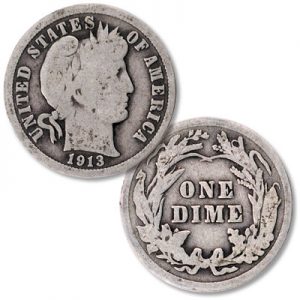 The ten-cent piece has had a variety of female profiles. The fourth dime to feature Liberty on the obverse was by nickel designer Barber. Her hair was combed in an updo, covered beneath a Phrygian cap, that is, in turn, secured by a laurel wreath. It was struck from 1892-1916.

But also in 1916, a new, look for Liberty debuted. The designer was A.A. Weinman. Like Barber, he reached back into antiquity. But instead of depicting the Roman goddess Libertas, he chose to add “wings of thought” to the Phrygian cap worn during the Hellenic period in the Kingdom of Anatolia (central Turkey today). It is seen here in this 1926 dime, the oldest dime Littleton Coin currently has available at its online store.

This classic look for Liberty quickly got nicknamed Mercury. In Rome, Mercury was the god of shopkeepers, travelers and transporters of goods. In the pantheon of Greek deities, the look was more closely identified with Hermes, the fleet-footed messenger of the gods. The nickname is a great mash-up of Greco-Roman culture. Minted from 1916-1945, the Mercury, or Winged, Liberty Head dime remains a collector’s classic. 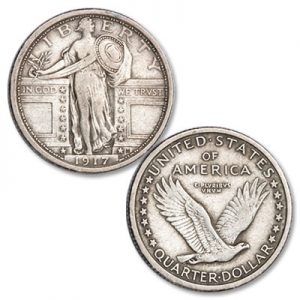 Larger in size than the first two coins, the quarter dollar offered more space for designers. Sculptor Hermon A. MacNeil came up with an amazingly detailed standing Liberty. It became the quarter’s new obverse the mint issued from 1916 to 1930. His winning design featured a full-length Liberty dressed in a gauzy toga, holding a shield in one hand and an olive branch for peace in the other. She’s paused at a gateway, facing right, or east, to the Great War raging in Europe that the US would enter the following year. But her exposed right breast caused some controversy, resulting in a modification and Type 1 and Type 2 versions of this highly collectible classic Liberty quarter design.

The other new upright Liberty design in 1916 came from Weinman. It was for the half dollar, even larger in size than the quarter. Weinman’s symbolic emblem, in a flowing gown, strode purposefully towards the dawn of a new day. Struck through 1947, this coin became a beloved classic known as Liberty Walking. 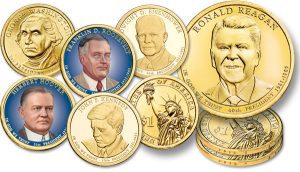 From 2007 to 2016, the US Mint issued a series of golden Presidential dollars for which, the reverse design paid homage to the world-famous beacon of freedom in New York Harbor, the Statue of Liberty. The last Presidential dollar featured our 40th president on the obverse, Ronald Reagan.

You can collect all five classic Liberty coins individually. Or, you can add them to your collection as a complete set – an incredible savings off individual coin prices.

These five classic Liberty designs also give you the opportunity to think long-term about building a coin collection just featuring Liberty. After all, there is Liberty on an Indian Head Cent, Liberty Seated, Liberty on the obverse of the silver American Eagle, the Draped Bust Liberty… the possibilities are endless. Happy collecting!