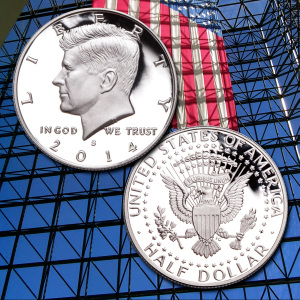 Kennedy Halves – 50th anniversary
of the series is honored

When Kennedy half dollars were first released to the public 50 years ago on March 24, 1964, long lines formed at banks and the U.S. Treasury to get the new coins – and available supplies soon ran out. Now, half a century later, people scrambled once again to get Kennedy halves – this time to purchase special gold Proofs struck for the 50th anniversary of the series. A Denver television station was on hand for the August 7th release of the gold Kennedy half dollars at the Denver Mint, and their footage aired nationally as it showed people tripping and falling as they raced to the mint’s retail shop for the chance to get a 2014 Kennedy half dollar Proof struck in ¾ ounce of 99.99% pure gold! After the frenzy, the U.S. Mint suspended in-person purchases of the gold coins – the premier issues of the special 50th anniversary Kennedy half dollars.

A coin that helped heal a nation 50 years ago 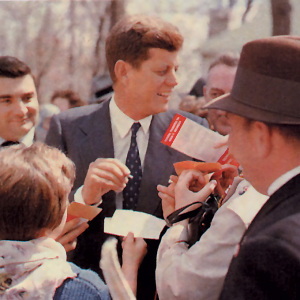 Rushed into production following the assassination of John F. Kennedy, the Kennedy half dollar preserved the memory of the popular young leader whose inaugural address in 1961 included these immortal words: “Ask not what your country can do for you, ask what you can do for your country!” With a youthful enthusiasm and passion for public service, President Kennedy was an inspiring leader to Americans from all walks of life.

His untimely death was the first assassination of a U.S. president in over 60 years, and occurred just 13 months after the tension-filled Cuban Missile Crisis during which Kennedy stared down Nikita Khrushchev and the Soviet Union with the world on the brink of nuclear war. The Kennedy half dollar, introduced in early 1964, brought some closure to the nation and helped people look forward to an eventful year that included the first performances by the Beatles in America and the blockbuster debut of the Ford Mustang.

Half dollars were still struck in 90% silver when the Kennedy series debuted in 1964. But due to rising precious metal prices, silver was reduced to 40% in circulating half dollars in 1965 and completely eliminated in 1971. All regular-issue halves since then have been copper-nickel clad. The design, featuring a profile portrait of JFK and the Great Seal of the United States, has changed only once – for the nation’s 200th birthday. All Kennedy halves struck during 1975 and 1976 bear 1776-1976 bicentennial dating, and a special reverse featuring Independence Hall, where the Declaration of Independence was adopted 200 years earlier on July 4, 1776.

Struck only in limited quantities since 2002

During their earlier years of issue, Kennedy half dollars played a significant role in daily commerce and were seen in pocket change on a regular basis. But with the proliferation of vending machines and other coin-operated devices that don’t accept 50¢ coins, the use of Kennedy half dollars declined and by the 1990s, the coins were rarely seen in circulation. With minimal usage, the Treasury Department made the decision to continue producing only enough Kennedy halves to satisfy collector demand, and that’s what it has done each year since 2002.

Will the Kennedy half dollar series continue after this year’s 50th anniversary is over?

There have been suggestions in recent years to discontinue the Kennedy half dollar series, but the coins remain very popular among collectors, and have significance to those who recall John F. Kennedy’s brief but memorable presidency. Government officials probably wanted to continue striking Kennedy halves at least until this year’s 50th anniversary of the series – during which special clad, silver and gold issues are honoring this major milestone. The U.S. Mint has made no statement regarding how long Kennedy half dollars will continue to be produced or how many coins will be minted each year.