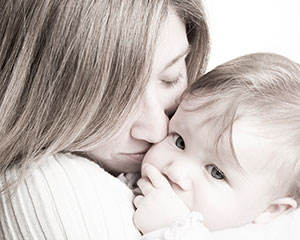 It’s her special way of hugging you whether you need it or not – but especially when you need it most… her comforting way that immediately lets you know you’re “home”… words of advice that are always spot-on… Mom always holds a special place in our hearts. But only in the last century (in the U.S.) has she been celebrated with a specific holiday.

It’s not really clear how the idea for Mother’s Day took off. It seems to be attributed to two women – Julia Ward Howe, who originally suggested it in 1872, and Anna Jarvis, who championed for it in 1907. Ms. Jarvis began promoting the holiday following the death of her own mother, since she saw it as the perfect way to honor her memory. Finally in 1914, President Woodrow Wilson set aside the second Sunday in May to honor America’s mothers. He declared that it would be “a public expression of our love and reverence for the mothers of our country.”

I don’t know about you, but a lot of the time I struggle with choosing just the right gift for Mom. It’s hard to find a balance between showing a lifetime of gratitude, and not breaking the bank! Sure, flowers are always a nice touch. But what if you want to think outside the box and get Mom something a little more permanent – something that has lasting value?

In 2014, a bill was introduced in Congress called the Mother’s Day Commemorative Coin Act. Surprisingly enough, the bill didn’t pass after it was introduced in the Senate. If it had become law, dollar coins would have been issued in 2018 to honor the holiday. I’d imagine that those pieces would have been an ultimate Mother’s Day gift, especially for Moms who are also collectors. 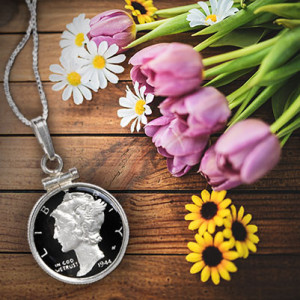 Even though these dollars won’t come to pass quite yet, gift options for Mother’s Day that are coin related are still pretty close to endless.

Some coins, like American Silver Eagles and those struck in pure gold are always nice gifts. Current-year coins are a great way to remember the occasion. Older issues can honor a date that’s important to Mom – like your birth year, your parents’ anniversary, or a big family vacation. Either way, precious silver and gold coins make treasured gifts. There are also the first spouse gold bullion coins (issued alongside the Presidential dollar series), which honor some pretty powerful women in our nation’s history.

Coin jewelry is another great option! For starters, it’s an elegant choice that works whether Mom prefers wearing gold or silver. And it’s issued in such a wide variety – both in different coin types and jewelry styles – that you’re sure to find something that’s just right. Personally, I love the Mercury dime necklace. Hands-down, that coin has always been my favorite – and the black enamel really highlights the best parts of A.A. Weinman’s stunning design.

So tell me – what are your favorite Mother’s Day traditions?