Recently, I’ve seen a few replica rounds out there that copy some designs from the old “hobo nickels.” Turns out, these coins have a history that stretches back further than I thought! 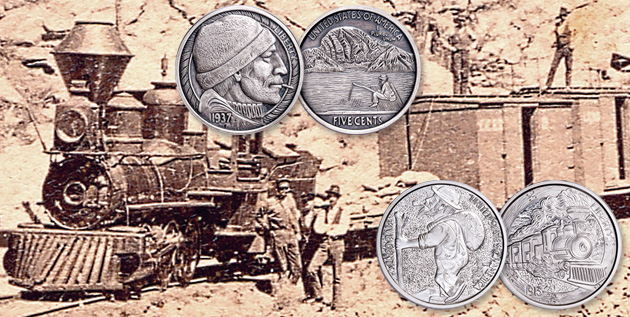 Recently, silver rounds have been issued that honor hobo nickels. “The Fisherman” and “The Train” are shown above.

Sometime around the 1850s, people made use of the Liberty Seated design on the quarter (and later, 20¢ piece). The design was modified to show Liberty sitting on an old-fashioned chamber pot – giving it its nickname, the “potty coin!” By the 1870s, the expression (and the coin used) had changed to “potty dollar.” This expressed dislike for Trade dollar coins, which also featured the altered motto “no free trade.”

Engraved love tokens were also popular during the 1800s. In those days, people bitten by the “love bug” would etch a decorative design into a coin as a way to express their feelings for their beloved.

The art of altered coins really took off, though, when three key pieces of history came together:

Once the Union and Central Pacific Railroads were joined at Promontory Point, Utah on May 10, 1869, a wealth of economic possibility flooded America. But then, just decades later, the Great Depression hit the U.S. As the unemployment rate topped off at over 20%, millions of people began scouring the country for work. But hobos made use of the most efficient transportation available. They hopped on trains to get from point to point, traveling the country for free.

Two early hobo nickel artists stand out among the fold – George Washington “Bo” Hughes and Bertram “Bert” Wiegand. Bert actually taught Bo the craft, having learned it himself around 1913. Though he didn’t carve as many nickels as Bo, Bert’s work was always of superior quality. Bo created a great number of works beginning in the late 1910s until a crippling hand injury in 1957. He did go on to create more hobo nickels beginning in the mid-1960s, but at a slower (and less detailed) pace.

Sure, they did it illegally, but not as a means to freeload. There’s actually a difference between hobos, bums and tramps, even though the terms were used almost interchangeably to describe the homeless during the Great Depression. Hobos are migratory workers – while bums and tramps were non-working beggars. Hobos had the desire to work – they just didn’t have the opportunity! 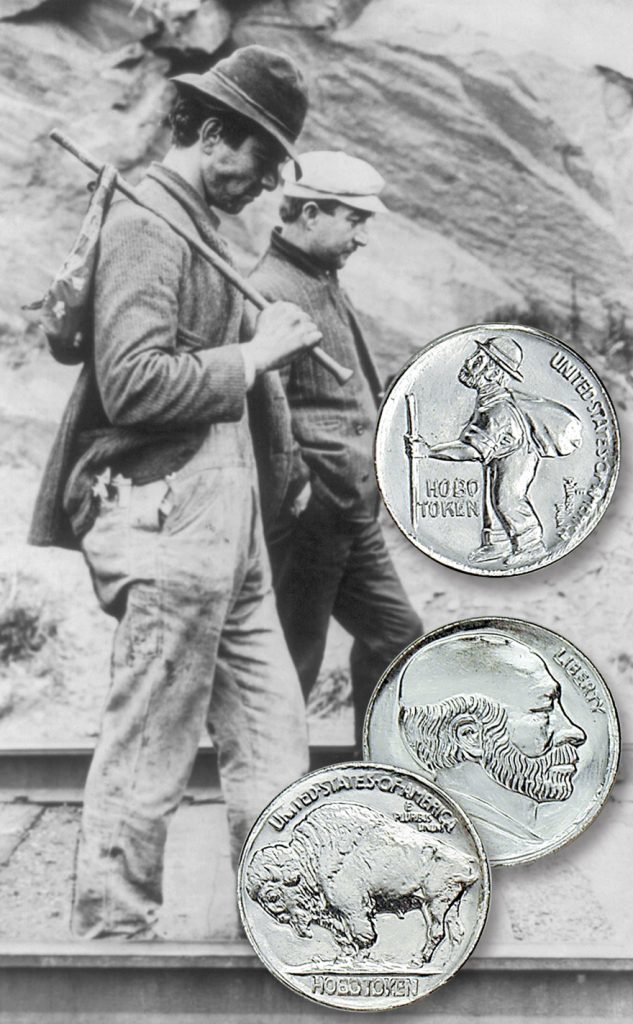 Hobos created a fascinating area of the hobby when they began carving Buffalo nickels!

As they traveled, hobos looked for ways to fill their time – coins were easy to carry, and carving them took a while. At the time, a quarter was a lot of money. The dime and cent were too small… but oh, the nickel! It was large enough to carve, and inexpensive enough to spare. Plus in 1913, the more delicate Liberty Head nickel design gave way to the broader features of the Buffalo nickel. This made it easier for hobos to make their own unique creations.

They’d use crude tools like nails, chisels, and knives to carve away at the existing design. Some elements were saved, and others changed to fit their vision. The obverse (Indian head) design was changed into any number of portraits – from family members, to clowns, to hobos in derby hats. It wasn’t often that the reverse (buffalo) would be carved. But when it was, it morphed into fantastic images like a man carrying a knapsack, donkeys – even a train car carrying hobos!

A newer style of hobo nickels emerged from 1980 on – around the same time Del Romines published his book, Hobo Nickels. These newer pieces are exciting because they boast more detail and a wider variety of designs, thanks to newer tools and technology. But at the same time, they lack the unique character of the original hobo nickels.

Today, there are still hobo nickel carvers out there! Have you ever come across one of these fun pieces?