Celebrating the “Golden Spike” that connected the country 150 years ago! 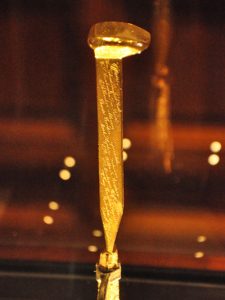 This year marks the 150th anniversary of a major milestone for our country. On March 10, 1869, a golden railroad spike was driven at Promontory Summit in Utah Territory to celebrate the completion of America’s first transcontinental railroad.

The cross-country line made transportation of rich natural resources of the west to manufacturing centers of the east much faster and easier. It also cut travel time between New York and California from about six months to one week!

The race to the finish

The Union Pacific workforce was mainly comprised of Irish immigrants and Civil War veterans. It suffered bloody attacks from Native American tribes as it laid track across the western plains. The tribes were threatened by the progress of the white man and his “iron horse” across their native lands. Nevertheless, the Union Pacific made much better progress than the Central Pacific.

Toiling through the rugged Sierra Nevada Mountains, Central Pacific’s work was extremely difficult. And turnover was high. Then the company began hiring Chinese immigrants who proved to be tireless workers. By early 1867, some 14,000 Chinese laborers were blasting tunnels through the Sierra Nevadas. And building huge wooden trestles across gorges and ravines. By summer, they broke through the mountains. The two railroad companies raced each other toward Utah Territory.

Deciding on a meeting point 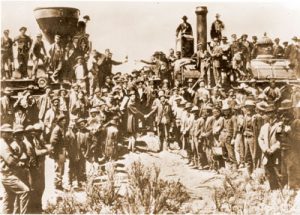 By early 1869, Union Pacific and Central Pacific were approaching each other. Newly inaugurated President Ulysses S. Grant then announced he would withhold federal funds until the two companies agreed on a meeting point. They decided on Promontory Summit, just north of Utah’s Great Salt Lake.

On March 10, 1869, locomotives from the Union Pacific and Central Pacific Railroads pulled up face-to-face at Promontory Summit. As a crowd of workers and dignitaries watched, a “golden spike” joined the rails of the two companies. And the nation’s first transcontinental railroad had been completed.

Current home of the golden spike

Following the ceremony, the Golden Spike was replaced with a traditional iron spike. And the ceremonial golden spike is now on display at Stanford University – founded in 1885 by Central Pacific Railroad President Leland Stanford.

Legacy of the transcontinental railroad

When the first transcontinental railroads began hauling freight, the trucking and airline industries were still several decades away. So railroads “carried the load” during America’s great industrial development from the Civil War to the First World War. Railroads were essential to Westward Expansion. And nearly 40% of U.S. freight still moves by rail today. The Golden Spike recalls one of the greatest achievements of the 19th century. 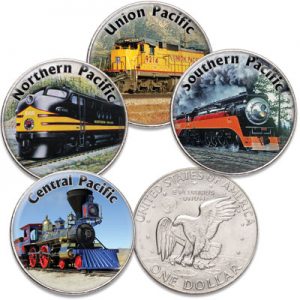 The 2007 Utah Statehood quarters feature the historic Golden Spike Ceremony. Littleton has Uncirculated P&D, clad and 90% silver Proofs, and exclusive colorized versions of the Utah quarter available. The U.S. Postal Service celebrated the 150th anniversary of the “Golden Spike Ceremony” with 3 stamps which depict the re-created ceremony locomotives. And Littleton will soon be offering a Famous American Railroads Set of colorized Eisenhower dollars honoring the 150th anniversary of the Golden Spike.