Last year around this time, I wrote about a hunk of metal used as a doorstop that turned out to be a rare Carson City die…. but what about a 17-lb rock that ignited a gold rush?

America’s first gold rush didn’t happen in California – it happened in the East in North Carolina! 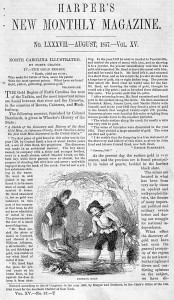 One Sunday, in 1799, young Conrad Reed decided to stay at home and fish while his parents went to church. Wading in Little Meadow Creek, on his parents’ farm east of Charlotte, 12-year-old Conrad noticed light reflecting off a shiny yellow rock and took it home. His father John couldn’t identify it, but decided that at 17 lbs. it made a useful doorstop, and there it stayed for about 3 years.

Back then, North Carolina was still very rural and remote, so most farmers made an annual trip to town. It was during one of these trips in 1802 that John took the doorstop to a jeweler in Fayetteville who told him it was gold! When asked what he wanted for it Reed named a princely sum – a week’s wage – $3.50! The jeweler profited by thousands. When Reed discovered his error, some sources say he was able to recover about a thousand dollars while others don’t mention that. In either case, whether he recovered money or not, it encouraged him to look for gold along Little Meadow Creek. At first, mining consisted of no more than digging on the surface or panning after crops had been put away and the stream dried up at the end of the summer. As word got out about the discovery of precious ore, thousands joined the hunt and America’s first gold rush was on!

Transporting gold all the way to Philadelphia to the mint (at that time, the nation’s only mint) was risky because of the distance and possibility of being robbed. And, trading dust and nuggets at a bank for coins or notes meant you took a steep discount – the solution – a local mint! Luckily for miners and residents, Christopher Bechtler arrived in 1830 and opened a private mint a year later. His coins circulated widely because of their correct weight and purity. He even produced America’s first-ever gold dollar. Today, all of Bechtler’s coins are now rarities – a prize for any collection. 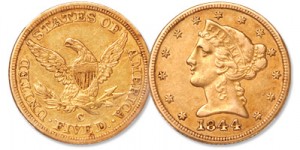 Finally Congress passed the Mint Act of March 3, 1835, authorizing a mint in Charlotte, NC! This mint struck only gold coins, producing its first – Classic Head $5 gold half eagles – bearing the “C” mint mark for Charlotte at the end of March in 1838. A fire briefly shut down operations for two years in the mid 1840s, but by that time, some of the rich veins of ore were giving out and by the end of the decade, tales of discovery of gold in California sent prospectors west. The mint continued operations until it was taken over by the Confederacy during the Civil War, and when the war was over, it didn’t reopen – serving instead as an office for the Union and later an Assay office.

Like the privately minted Bechtler coin, all Charlotte Mint issues are very scarce, rare and highly desirable. But for collectors, the Charlotte “C” on those early U.S. gold pieces tells the forgotten story of our first gold rush and a 12-year-old’s special yellow rock.