“War… What is it good for…” well coin collectors know, in some cases, conflict creates new coins and currency – most notably the one-year-only 1943 Steel cent! This coin doesn’t stand alone though – there are Civil War 2¢ pieces, Peace dollars, silver Jefferson nickels and many specialized notes all developed because of war.

The Uncle Sam recruitment poster is used for the first time during WWI. (Left) On May 7, 1915, the RMS Lusitania was just 120 miles off the coast of Ireland when it was hit by a torpedo from a German U-boat. It sank, and over 1,000 passengers died. This event angered Americans and helped shift opinion to favor war. (Right)

Explores relationship between war & money while honoring those who served!

Conflict and Courage: Money and the Military is the theme of this year’s National Coin Week, which runs from April 16-22, 2017. This year marks the 100th anniversary of the year United States’ entry into WWI. So the ANA (American Numismatic Association) used “The War to end all Wars” as a springboard to explore the link between the military and money.

It was 1915, and the world was changing – politics toppled kings and brought down empires. As World War I raged in Europe, the U.S. remained cautiously neutral. That was, at least, until a German U-boat torpedoed and sank the British luxury liner Lusitania in May. The ship happened to be carrying over 100 U.S. citizens, and opinions began to change. Then in February 1917, the U.S. learned about the intercepted Zimmermann telegram proposing a partnership between Germany and Mexico (if Mexico joined the German cause). By April we had declared war on Germany. 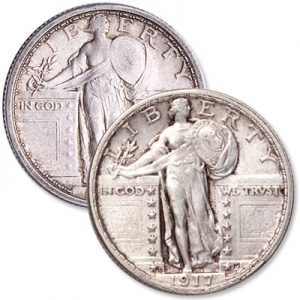 The first new Standing Liberty quarters of 1916, pictured Liberty standing at the gateway of our country with a shield on her left arm, an olive branch in her right hand and her chest uncovered… scandalous! Stories have it that an outraged public insisted Liberty be fully clothed, which led to a revised design. Decades later, a thorough search of government records revealed that wasn’t the call for a fully clad Liberty that prompted changes it was WWI. Hermon MacNeil updated his quarter design and gave Liberty chain mail – more warlike attire.

The beautiful Peace dollar is another coin whose creation stems from this conflict. Peace dollars are America’s only coins struck to honor peace. The reverse bears the inscription peace to mark the end of WWI – which many hoped would be “the war to end all wars.”

Look back at the Civil War, we got 2¢ pieces – the first U.S. coins with in god we trust! Fractional and Confederate currency along the “Greenback” were born. During World War II, scarcity caused by wartime led to the production of the 1943 Steel cents and 1942-45 silver Jefferson nickels. Metals used to produce those coins were needed for war efforts so steel and silver were substituted. In addition, war creates byproducts like tokens, interesting German Notgelds, the hyperinflation notes that circulated in Germany after WWI or the more recent Military Payment Certificates of 1946-73, issued to pay members of the armed forces stationed aboard.

This year’s National Coin Week theme Conflict and Courage: Money and the Military presents a wonderful opportunity to learn about a wide variety of coins and currency by exploring the events and history that surrounds their creation. Enjoy!