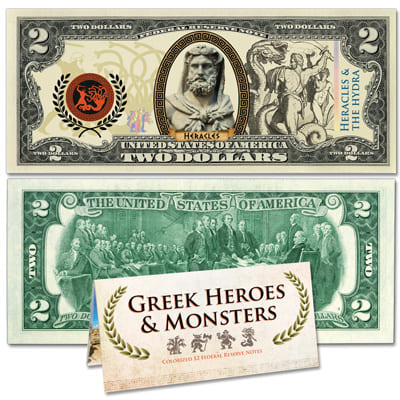 It’s no secret that Littleton’s artists consistently fire on all cylinders. The market for special colorized coins and paper money continues to grow, and we’re always excited to meet that demand!

The result of a behind-the-scenes brainstorm, this Littleton Coin exclusive series honoring Greek Heroes and Monsters has been a fast hit. We’ve taken $2 Federal Reserve Notes and enhanced the face in tribute to a famed Greek hero – and the mythological monster he battled.

For more than 2,700 years, the mythology of ancient Greece has captured imaginations with tales of heroic warriors and fearsome monsters. Now, let’s take a look at some of the legendary legacies celebrated in this Littleton Coin exclusive series! 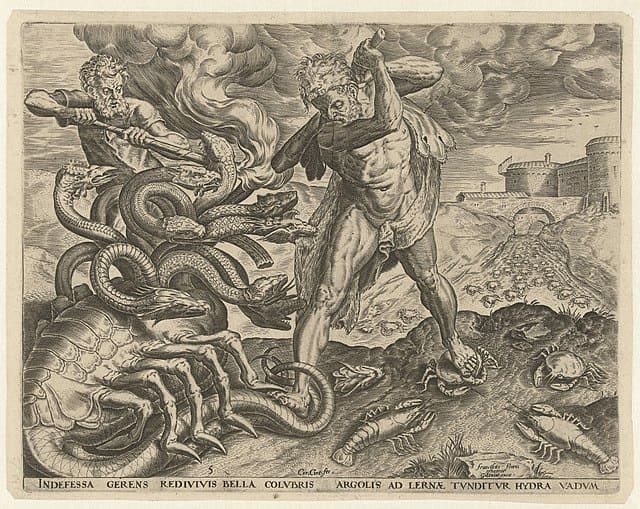 Kicking off the series: Heracles & the Hydra!

To kick off the series, we chose Heracles (known as Hercules in Roman mythology) and the nine-headed Hydra. Heracles was among ancient Greece’s mightiest and most celebrated heroes. The son of Zeus and the mortal Alcmene (granddaughter of Perseus), Heracles committed many acts of heroism, of which his Twelve Labors are the most famous.

The second of his Twelve Labors was to slay the Hydra of Lerna, a monstrous beast with nine heads – one of which was immortal. Each time Heracles crushed or cut off a head, two more immediately grew in its place. So he had his nephew, Iolas, burn each stump. The trick worked on all but the last head, which he cut off and buried. 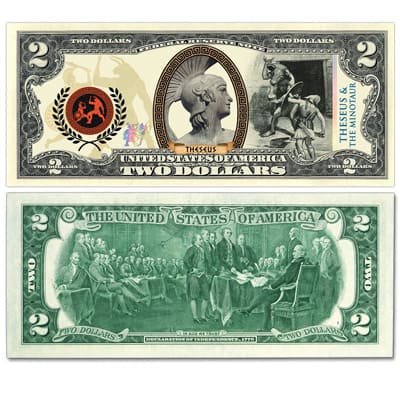 Up next: Theseus & the Minotaur

Following Heracles and the Hydra, we have Theseus and the Minotaur. Theseus was the son of Aegeus (king of Athens) and Aethra – although some legends say his true father was Poseidon. A champion of justice and a hero of many exploits, Theseus is best known for defeating Asterion, the ferocious half-man, half-bull Minotaur of Crete.

To avenge his son’s death, Crete’s powerful ruler, Minos, forced Athens to pay a tribute each year of seven youths and maidens, who were then devoured by the Minotaur in its Labyrinth lair. Theseus volunteered as a sacrifice and slew the beast with help from Minos’ daughter, Ariadne, who had secretly given him a sword and a ball of string to mark the way out.

Each note in this custom series features a portrait of the honored hero at the center. Their famed battle is immortalized in an illustration to the right. I had the opportunity to chat with Charlena, one of the brains behind the series. She mentioned that one thing she really wanted to achieve with this Littleton Coin exclusive series was to model the notes after actual paper money… complete with a “seal”, a “watermark” and two rainbow “security features”! 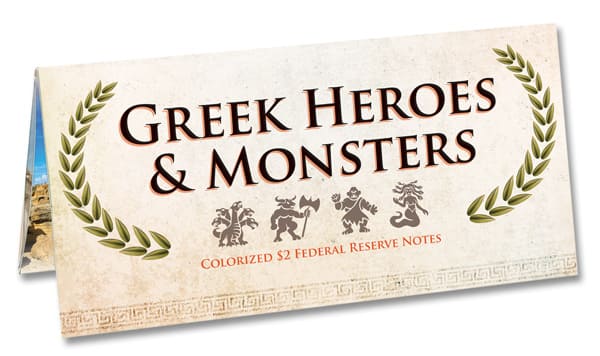 The first two notes in the series have already made their debuts. In the coming weeks, this 4-note series will wrap up with the final two designs – Odysseus & the Cyclops, and Perseus & Medusa.

In order to keep the designs in order and on display, we’ve also created a custom illustrated holder. It has spaces for all 4 notes in the series, and it’s included FREE with the first note depicting Heracles & the Hydra!

Are you a fan of Littleton Coin exclusive colorized collectibles? Will you be collecting this series? We’d love to hear what you like best below!