What famous American leaders from WWII would you invite to a dinner party?

We, too, wondered who we’d want at a sit-down soirée. It was part of the creative process. We were brainstorming a full-color, 10-coin tribute series on Kennedy half dollars to celebrate the 75th anniversary of the global war’s end. 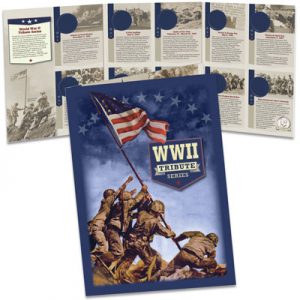 We knew we wanted to create an informative 6×8-inch display folder for the coins. And, we would illustrate it with historic images, a timeline of notable episodes, and a locator map.

Choosing five events was the easy part. We started with the attack on Pearl Harbor in Hawaii. Then we progressed to the D-Day Landing in Normandy, France. Next, on to the Battle of Iwo Jima in the Pacific. For the last two significant dates, we chose Victory Day in Europe followed four months later by the unconditional surrender of Imperial Japan on board the USS Missouri in Tokyo Bay. That one signaled the formal end of WWII.

But who to invite to the table?

Sitting in the seat of honor 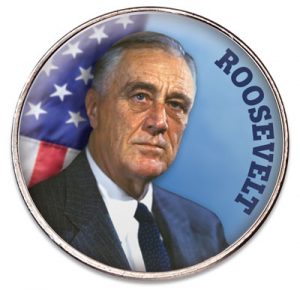 After listening to some of the archived “fireside chats” of his radio broadcasts, we chose the well-spoken President Franklin D. Roosevelt. We wrote a name card, placing FDR at the head of our dinner table. Roosevelt’s first two terms as president saw him deeply involved with trying to pull America out of the Great Depression. That was no easy feat. Not all FDR’s initiatives succeeded, but the ones that did are still in place, such as the Federal Deposit Insurance Corporation (FDIC) and Social Security.

But what would FDR say about the growing tensions he saw developing on the world stage during his second term? Germany, Italy and Japan were escalating hostilities when FDR decided to run for a third term. By his fourth, Roosevelt was holding strategic meetings with Winston Churchill of Great Britain and Joseph Stalin of the Soviet Union, first in Tehran and later in Yalta. But FDR passed before Victory Day in Europe was declared. Did everything turned out as FDR had hoped?

On either side of our 32nd president, we’d seat two generals. One would be General Dwight D. Eisenhower. The other would be General Douglas MacArthur. On both, FDR would confer the rank of supreme allied commanders, respectively, of Europe and of the Pacific.

But before that happened, in the 1930s, Lt. Col. Eisenhower was Field Marshal MacArthur’s chief of staff in Manila. There, Eisenhower oversaw the Philippine Defense Plan that called for building military forts as the U.S. prepared the island nation for independence.

Eventually, Eisenhower would return stateside. After the Pearl Harbor attack, he would find himself summoned to Washington, D.C. He was assigned to create a European Allied military strategy, first for North Africa and then for Europe.

MacArthur remained in Manila, but only briefly. Imperial Japan attacked the Philippines’ capital city on December 8, the day after its pilots dropped torpedoes and bombs on U.S. military installations on Oahu. Before long, FDR ordered MacArthur to evacuate to Australia. It would take the general two years of careful deployment, island-hoping northward until he and his men were able to liberate the Philippines. 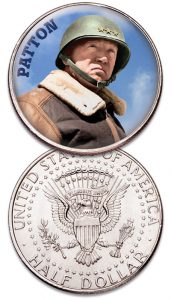 A brilliant strategist able to assess both military and civilian liabilities, Eisenhower never saw combat during his entire career. By contrast, his study partner at the Command and General Staff School at Fort Leavenworth in Kansas, George S. Patton, would happily have seen more.

Nicknamed “Old Blood and Guts” by his much younger citizen-soldiers, the career general relished mobilized warfare. Eisenhower sent him into North Africa for Operation Torch, and no one should have been surprised at the victory Patton pulled off in Tunisia.

We here at Littleton Coin have read plenty about Patton’s salty – albeit effective – motivational language. Maybe we’d put an empty sugar bowl for cuss-word fines on the linen-lined dining table. After dessert, we’d make a donation to charity.

To round out the dinner invites, we’d ask that nice, young navy officer who became our 35th president to sit next to General MacArthur. Educated, affable, and a natural athlete, John F. Kennedy and his PT crew found themselves on the wrong side of an Imperial Japanese destroyer in 1943. Kennedy’s heroic rescue of his crew became legendary and, no doubt, helped get Kennedy elected president, succeeding Eisenhower.

Wow! What a dinner party! A history buff’s version of fantasy baseball!

But you don’t have to imagine a dinner to get yourself acquainted with these five heroes from the Second World War, plus the five major events that shaped the course of history. Our artists have colorized 10 Kennedy half dollars to applaud these men and commemorate these events, along with designing an informative display folder made here in the USA. Order Littleton Coin’s WWII Tribute Series now!