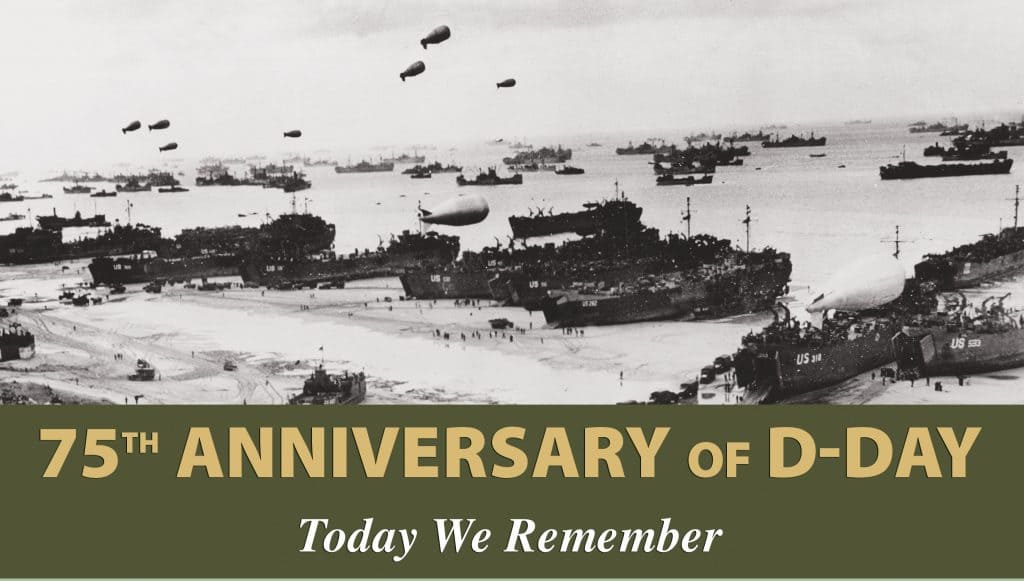 As wind blew through early morning darkness 75 years ago on June 6, 1944, Operation Neptune was underway. It would be the largest seaborne landing in military history to date.

Gusts up to 24 mph pushed across the English Channel. On those white-capped waves, more than 4,100 Allied transport ships and landing craft were approaching a 50-mile stretch of coastal France in the province of Normandy.

Clouds further shrouded the pre-dawn blackness in which paratroopers would stage a night jump hours ahead of the beach landings. A later fleet of aircraft would provide mission-critical cover for the 156,000 troops – from the U.S., Great Britain and Canada – coming ashore at low tide.

The goal was as risky as it was bold: Use the unstable weather to take the occupying Nazis by surprise and break through Adolph Hitler’s fortified Atlantic Wall. Code-named Operation Overlord, the Battle of Normandy was strategically designed to liberate northwestern France. The ultimate goal? End World War II in the European theater.

This year marks the 75th anniversary of the heroic military actions taken on that Tuesday known the world over as D-Day. It comes with the opportunity to collect coins and currency that recall the events and people who changed the course of history.

In his Order of the Day for that fateful deployment, U.S. General Dwight D. Eisenhower, Supreme Commander of the Allied Expeditionary Force, included in his message to the troops these words:

In company with our brave Allies and brothers-in-arms on other Fronts, you will bring about the destruction of the German war machine, elimination of Nazi tyranny over the oppressed peoples of Europe, and security for ourselves in a free world.”

By 5:30 a.m. Allied naval bombardment was underway. Normandy Beach had been carved into five manageable sectors with U.S. forces taking the two more challenging landings on the Cherbourg (Cotentin) Peninsula. A rugged expanse of tall cliffs, man-made seawalls and wetlands, they were code-named Utah and Omaha Beaches. These were the states where the American commanders came from. The fighting was intense, especially for the more than 2,000 courageous troops who paid the ultimate price that morning on Omaha Beach.

Using fish names, the resort beaches to the East were code-named Gold, Jelly and Sword. The British took Gold and Sword Beaches. To avoid confusion with jam, the Canadians renamed the middle beach after an officer’s wife and called it Juno. By day’s end, these beaches were secured, and the Allied troops began fighting their way inland to Paris, 170 miles away.

At 12:15 p.m. at the House of Commons in London, Winston Churchill told his fellow politicians:

…everything is proceeding according to plan. And what a plan! This vast operation is undoubtedly the most complicated and difficult that has ever occurred.”

Meanwhile, tenacious U.S. bombers repeatedly dropped munitions on the Nazi’s concrete gun pits on the Omaha cliff known as Pointe du Hoc. By the evening, U.S. troops were able to gain some measure of control over Omaha Beach and start to take prisoners of war. As the clock’s hands turned on a new day, the Allies had a firm hold on the beaches. More combat lay ahead, but in nine months, Victory-Europe (VE) Day would be proclaimed. 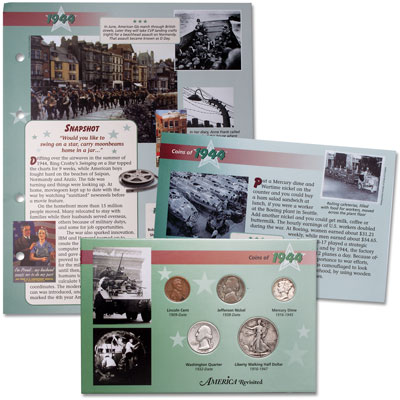 Few collectibles can match the historical interest and significance of U.S. coins and stamps issued during WWII, nor the lure of owning a five-coin, wartime collector’s set. Military collectors, especially, might be interested in this special set showing the victors of WWII colorized on Kennedy half dollars.

And, if you were born in 1944, there are more coins and history relating to WWII and D-Day found in Littleton’s silver Year Set of 1944.