Thanks to the United Nations, the world observes International Peace Day each year in September. As the date in 2019 is September 21, how about a quick tour of coins whose surfaces bear different symbols for peace? 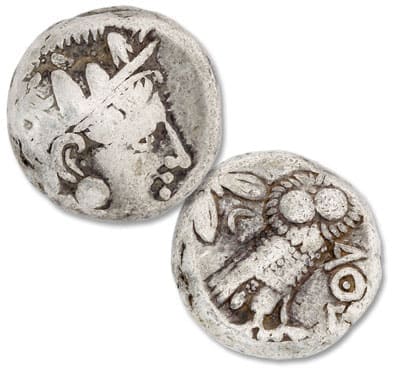 Let’s start by setting the dial on the way-back machine for ancient Greece, and head to a span of time in Athens from 393 to 350 B.C. After the Peloponnesian War, a new coin’s obverse was struck with the profile of Athena, the goddess of war and wisdom. The reverse design on this silver decadrachm included three leaves from Athena’s sacred plant, the olive tree. Regarded as a symbol of not only peace, but also prosperity, many believe the coin’s implied message is “peace nurtures wealth.”

A Pax on Your House

Now let’s move into the Georgian calendar and the vast Roman Empire, where a lot of emperors knew how to live large – gluttonous feasts, noisy chariot races, gruesome gladiator competitions, battles and commemorating peace on coins, too?! 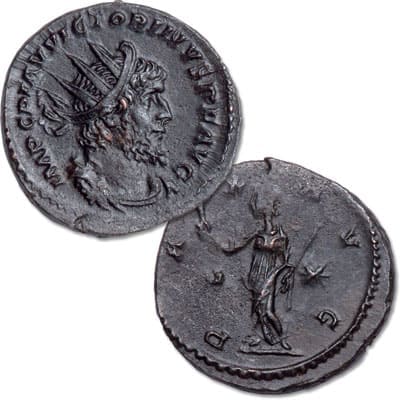 Born into a family of huge wealth in Roman Gaul, Marcus Piavonius Victorinus was a skilled military leader. For three years from A.D. 269 to 271, Gaul’s emperor made his mark by regaining territories lost from previous battles in countries we recognize today as France, Germany and Great Britain.

At a mint near the Rhine River in Cologne, Germany, Victorinus had bronze coins issued with his likeness on the obverse and Pax, the Roman goddess of peace, on the reverse. Pax holds a scepter and an olive branch as a reminder to followers to maintain harmony with one another. Alas, Victorinus, who had an attraction to his soldiers’ wives, met a not-so-peaceful end when one husband avenged his wife’s honor. 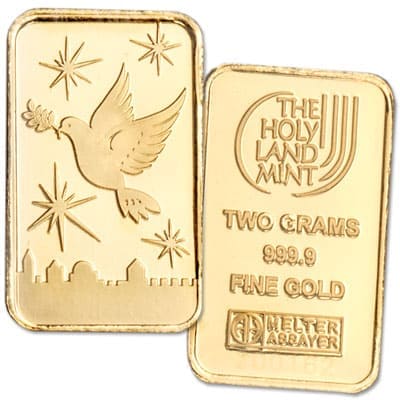 Now let’s set the time machine ahead to our current century’s coins and designs inspired by history.

Here’s one example: the pure, white and humble dove. She let Noah know the flood waters were receding. She inspired Picasso’s emblem for the First International Peace Conference in Paris in 1949. And in flight over the Old City of Jerusalem, the Dove of Peace graces this beautiful 2-gram gold bar from the Holy Land Mint.

Peace can also be monumental. Take the gigantic Doric column overlooking Lake Erie in Ohio that commemorates the naval triumph of Commandant Oliver Hazard Perry in one of the last battles in the War of 1812. The U.S. Mint struck its image on a 2013 quarter as part of its hugely popular series on our national parks. Littleton Coin took it a step further by designing an informative Showpak® for Perry’s Victory and International Peace Memorial. 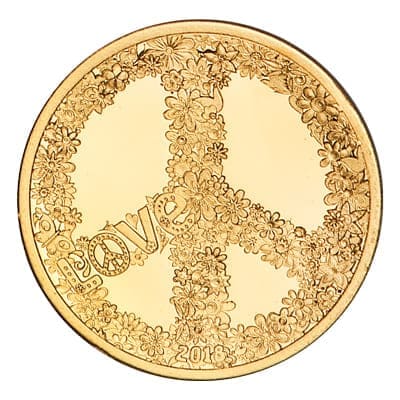 Throughout history are those worried about war. Concerned about the proliferation of nuclear weapons, British graphic designer Gerald Holtom in 1958 repurposed how hand-held flags spelled information – known as semaphore signals – to spell “nuclear disarmament.” It became the internationally recognized symbol for peace. Minted in 2018, this beautiful Gold $1 Love and Peace Proof uses a delicate floral motif to give the message a retro, yet fresh look.

And then there are medals. Many collectors look for medals that are hard to find, have a higher precious metal content because of their size and heft, or that thematically pair nicely with one of their areas of interest. They also make great gifts! 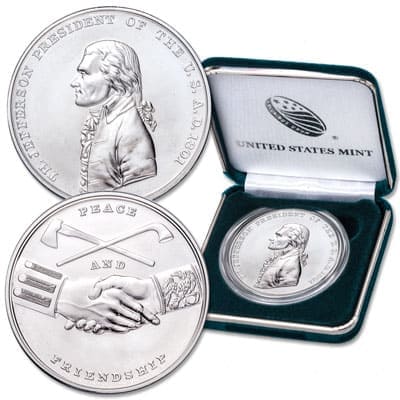 The U.S. Mint has a medal series profiling U.S. presidents on the obverse with an image that relates to their leading achievement on the reverse. Take a look at one for Thomas Jefferson. It is a replica of the silver medal Lewis & Clark gave out to Native American chiefs as they charted the Louisiana Purchase for the president who negotiated the acquisition from France. It features a peace pipe and tomahawk paired with two hands clasped in harmony and includes the inscriptions peace and friendship.

Are you collecting peace coins? Share with us some of your favorites! Or, which ones you are looking for.

If you’re just finding our Heads & Tails blog for the first time and want our weekly posts in-boxed to you for free, sign up today! Enter your email address under “Subscribe to Heads & Tails” on the right!