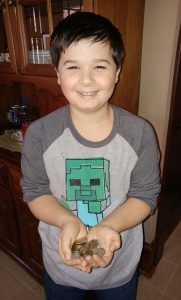 About a year ago, I had the privilege of meeting a cool little guy named Sam. He’s a Webelos Cub Scout who’s resourceful, crafty and loves to build things. After he found out I work for Littleton Coin Company, he started asking questions about coins – questions I was all too happy to answer! He’s inquisitive and always has an eye out… and boy, did it ever pay off for him recently.

You see, Sam’s gotten in to the habit of checking coin returns wherever he goes. One night, while shopping with his Dad, he came across a small handful of change that had been left behind. It wasn’t long after they got home that I received a picture text message. “Check out what Sam found tonight – he’s calling soon!”

My jaw dropped. It was a plate full of U.S. and world coins… including several Austrian Schillings, 1/2 Francs and 20 Rappen coins of Switzerland, a German 10 Pfennig and a 1 Franc from Belgium. And sitting smack dab in the middle of the group were two Mercury dimes! I was still processing what I was seeing, when my phone rang. I answered to hear a breathless – and VERY excited: 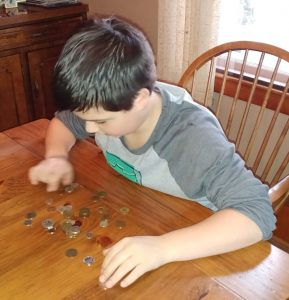 He still enjoys looking through the group and admiring the designs.

“Did you get the picture from Daddy yet? Did you see what I found?! Are those good?!”

“Sam… that’s amazing! Where did you get those?!”

If at first you don’t succeed…

After months of persistence, checking coin returns and insisting that we wait “just one minute!” whenever we saw one – he found a handful of coins, proving to us that ‘trying again’ was worth it. That evening I spent over an hour on the phone with him. We talked about the different countries these coins came from, and what some of their designs mean. It was so much fun, having something REAL that I could show him, and say, “I know you haven’t learned about the Great Depression or World War II in school yet, but you will. You should totally hang on to those, because soon enough you WILL be learning about them in school. And these might be a help to you on one of your projects – they were issued back then. One of those is 80 years old!” 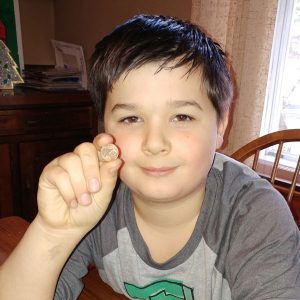 I asked Sam what his favorite coins in the bunch were, and he had a hard time giving me just one! He settled on his top three: a 2002 Italy 1 Euro cent, a 1936 Mercury dime, and a 2001 Switzerland 2 Franc piece. He likes the 1 Euro cent because “it’s like a penny, only it’s smaller and fatter, so it’s kinda cool.” As for the Mercury dime… “it has an axe on the back with a piece of wood, and it reminds me of cutting pieces of wood with my hatchet.” And the 2 Franc coin – well, “it’s the biggest, so it really stands out.”

“What are they made from?”

It was great. Being able to share pieces of history in a way that he understands, and help him make that connection… it was a feeling that’s hard to describe. That night, his Dad had to work hard to pull him away from the conversation. Sam only went to bed with the promise that he could bring his plate of coins with him, and keep them by his bed. That’s a fascination that doesn’t easily go away.

He may not know it yet, but I suspect that Sam’s collection is just beginning… And that his future will hold more than one green coin folder, filled with his favorite finds from coin returns. As for me – I’ve found a great new way to connect with someone special and share my love of collecting.