“The war to end all wars” 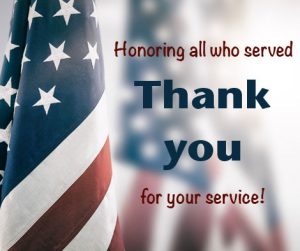 Wishfully called “the war to end all wars,” WWI was long and costly. So it made sense to commemorate the end of fighting. And made sense to honor those who served in WWI. Though not an official holiday, November 11 was observed in many U.S. cities and towns as “Armistice Day.”

Then in 1926, Congress formally declared that the anniversary of the WWI armistice should be “honored with prayer and thanksgiving.” The number of observances increased. And in 1938, Congress established November 11 as an official federal holiday – “dedicated to the cause of world peace and to be hereafter celebrated and known as Armistice Day.” So it continued to honor veterans of World War I.

Of course, WWI was not “the war to end all wars.” The Second World War enveloped the globe from 1939-1945. And American troops fought in the Korean War from 1950-1953. After those conflicts, veterans organizations urged Congress to reconsider Armistice Day – which honored only veterans of WWI. So in 1954, Congress amended the law that made November 11 a federal holiday. The name “Armistice Day” was changed to “Veterans Day.” And November 11 became a day to honor all American veterans.

Establishing the date of observance

But the saga of Veterans Day was not over. To create more three-day weekends for federal employees, the Uniform Monday Holiday Act of 1968 established Monday observances for several holidays. This included Veterans Day, which was assigned to the 4th Monday in October. But many states opposed this change and continued to observe Veterans Day on November 11. Finally, in 1975, President Gerald Ford signed legislation returning Veterans Day to its original date of November 11 beginning in 1978.

The observance of Veterans Day

Honoring all veterans of the U.S. Armed Forces, and uniformly observed on November 11, Veterans Day has become a revered national holiday. It is celebrated with parades, speeches, displays of the American flag, singing of the National Anthem, tributes to veterans and other patriotic observances. A Veterans Day National Ceremony is held on November 11 each year at Arlington National Cemetery. A wreath is laid at the Tomb of the Unknowns. Then a parade of colors by veterans’ organizations and remarks by dignitaries take place inside the Memorial Amphitheater. 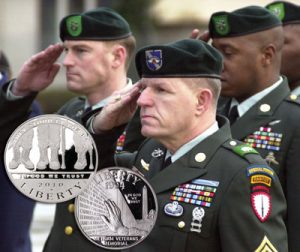 Coin enthusiasts can be proud that several coins have been issued in recent years to honor America’s veterans. They include: