One of the earliest advocates for people living with disabilities was Helen Keller. Her achievements were so important that her home state of Alabama honored her on the reverse of its statehood quarter. The tribute went so far as to put her name in a reduced-size version of Braille, raised on the field. You can also see the Braille on this exclusively colorized statehood quarter done by Littleton Coin’s artists. 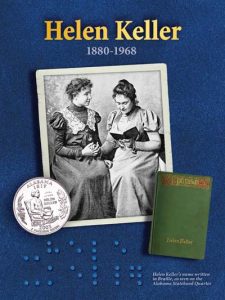 When we launched Littleton Coin’s Prominent Women in U.S. History Collection, we chose to include Helen in the first 12 of the 36 coins chosen for this project. We discovered a lot about Helen’s challenges and triumphs. On her story card we included her name in Braille spelled out on the front. It’s not raised, but it is a neat visual accent that acknowledges the importance of this system of communication.

Louis Braille was born on January 4, 1809 – a day that’s now celebrated annually as World Braille Day. As a child, he was blinded by an accident in his father’s leather shop in a village east of Paris. For schooling, his family sent him to the Royal Institute for Blind Youth in France’s capital city. There, he learned about “night writing,” a 12-dot system devised by Charles Barbier that allowed Napoleon’s soldiers to exchange messages without exposing their position to enemy fire.

In 1824, Braille successfully refined the communication system to six dots. In 1860, it was first adopted in our country by the Missouri School for the Blind in St. Louis, 20 years before Helen Keller’s birth.

Sometime after Helen was born, she was struck by an unknown illness that left her both blind and deaf. In 1866, Helen’s parents sought the advice of speech teacher-turned-inventor Alexander Graham Bell. Ten years earlier, Bell had debuted his voice transmission and amplification system at the Centennial International Exhibition of 1876 in Philadelphia. A series of introductions then led to meeting Anne Sullivan who became Helen’s tutor, teaching her Braille so she could learn how to read.

The Making of an Advocate 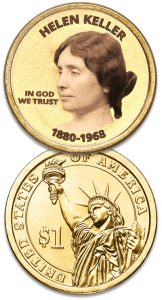 Helen went on to use a Braille typewriter to write her first autobiography, The Story of My Life, which was published in 1903. She wrote a lot, including hundreds of articles for leading magazines. She also wrote speeches she would deliver, with an interpreter’s help, on behalf of the American Foundation for the Blind.

In 1915, she cofounded what we know today as Helen Keller International, which began by helping soldiers blinded in World War I combat. Today, it’s a worldwide organization working to prevent blindness and fight malnutrition, a leading cause of blindness, especially in children.

A champion of “civil rights for all,” Helen campaigned for equal rights for women. She was a frequent NAACP contributor. She cofounded the American Civil Liberties Union. In fact, her persistent efforts to improve treatment for the blind, and deaf, led many to be deinstitutionalized from mental asylums – a fate she once faced as a young child before her parents decided to seek Bell’s advice.

How you can subscribe to Prominent Women in U.S. History

Helen Keller’s achievements, and those of other women who rose to prominence by their grit and determination, helped shape the United States we recognize today. Curious to learn more about other notable women, such as Sally Ride, Eleanor Roosevelt, Harriet Tubman and Dr. Elise Strang L’Esperance?

Sign up for Littleton Coin’s innovative subscription program for Prominent Women in U.S. History! You’ll save on individual coin prices while enjoying free monthly shipping. We have two different subscription programs, each featuring coins exclusively colorized by Littleton’s artists. One subscription is based on golden Presidential dollars. The other subscription is for silver American Eagles. Both come with visually stunning display folders and informative story cards that will help you appreciate your collection. Join today!