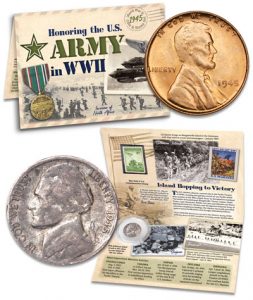 For more than 5 1/2 years, Adolf Hitler’s fearsome Nazi forces had invaded, occupied and terrorized Europe. From Norway to Greece… France to the Soviet Union. Then, on April 30, 1945, Hitler took his own life as Allied forces closed in on Berlin from the east and west. And Soviet troops were within blocks of Hitler’s underground bunker.

His appointed successor was Grand Admiral Karl Donitz. During his brief stint as Germany’s president, Donitz negotiated an end to the war with the Allies. He was hoping to keep as many Germans as possible from falling into the ruthless hands of the Soviets.

On May 4th, Nazi forces in the Netherlands, northwest Germany and Denmark surrendered to British Field Marshal Bernard Montgomery near Hamburg, Germany. Then on May 7th, Supreme Allied Commander Dwight D. Eisenhower accepted the unconditional surrender of all German forces at his headquarters in Reims, France. The signed document went into effect the following day.

May 8, 1945 was proclaimed V-E or Victory in Europe Day. A day of celebration, when millions of soldiers and civilians gathered in the streets across Europe and North America. People cheered, hugged, danced and sang songs. Flags and banners were waved and displayed. All rejoiced in the defeat of the Nazi war machine.

V-E Day was especially welcome in Great Britain – the first nation to seriously resist German aggression before the U.S. entered the war. King George VI and Prime Minister Winston Churchill addressed the nation. The king’s words included: “Let us remember those who will not come back.” Churchill cautioned that the war against Japan continued: “We may allow ourselves a brief period of rejoicing, but let us not forget for a moment the tolls and efforts that lie ahead.’ 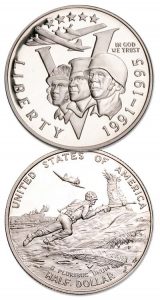 Times Square in New York City looked like New Year’s Eve. But there were celebrations and gatherings in cities and towns across the country. After years of battle, war production, conservation, rationing and recycling, America relished a day of joy.

Ironically, May 8th coincided with President Truman’s 61st birthday. It was also the Truman family’s first full day of living in the White House. The president paid homage to his predecessor who died less than a month before the German surrender: “I only wish that Franklin D. Roosevelt had lived to witness this day.”

May 8th celebrated ever since

May 8th has ever since been celebrated as V-E or Victory in Europe Day. It was not the end of WWII, which did not come until Japan’s surrender on August 14. But it brought peace to a major portion of the world. And it brought millions of soldiers home to their families.

You can honor their service with 1945 U.S. cents struck in bronze recycled from spent shell casings. Or 1945 5¢ coins struck in a 35% silver alloy to save nickel for the war effort. You may also like the 1993-P commemorative half dollar honoring the 50th anniversary of U.S. involvement in WWII.