“Several times, during various lulls of wind and sea, I thought I heard indistinct sounds, a sort of elusive harmony produced by distant musical chords. What was the secret behind this underwater navigating, whose explanation the whole world had sought in vain?”

Oh, to be born with curiosity and a fertile imagination! To have skills that come from being a lawyer, a stock broker and a playwright. To witness enormous political changes that add depth to your storytelling. For extra measure, throw in a visit to an international industry expo. And, maybe a rivalry with an author famous enough to be immortalized on a bank note?

Et voilà! Let me introduce you to French author Jules Verne and his groundbreaking science-fiction adventure novel 20,000 Leagues Under the Sea. This year marks the 150th anniversary of the book’s remarkable publication and enduring appeal! Read on to discover more.

Love of the sea, love for a woman

“…Traders, shipowners, captains of vessels, skippers, and master mariners from Europe and America, naval officers from every country, and at their heels the various national governments on these two continents, were all extremely disturbed…”

Some 280 miles southwest of Paris, where the Loire River empties into the Atlantic Ocean, Nantes was a busy seaport. It was there that Jules Verne was born in 1828, just two short years before the second French Revolution of 1830. Growing up on an island in the river, he spent his childhood watching ships and dreaming of maritime adventures.

When Verne came of age during the February Revolution of 1848, his father sent him to Paris to study law so he could follow in his footsteps. But as sons often do, Verne had other plans. Observing the turbulent political scene, but not participating in it, Verne spent a good deal of his time in theaters. He wrote plays, vaudeville-like comedies, operas and grand spectacles. And then he fell in love with and married a young widow with two small daughters. 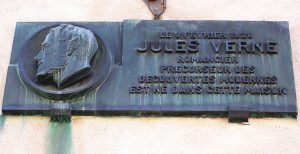 Plaque on Verne’s birthplace on Feydeau Island in Nantes.

But while his new family’s need for financial stability turned him into a stock broker by day, at night Verne continued to write. That lifestyle changed when editor and publisher Pierre-Jules Hetzel accepted one of Verne’s short stories for publication in Magasin. The science education and entertainment family magazine would become the ideal vehicle for serializing the writer’s longer experiment with a new literary genre he was pioneering, science-fiction adventures.

Hetzel already had proven success with serials. His stable of French authors included Alexander Dumas (The Count of Monte Cristo), Honoré de Balzac (The Human Comedy), and Victor Hugo (Les Misérables). Of these three, Dumas took the budding sci-fi adventure writer under his wing. But of these three, only Hugo has been honored with his likeness on a French bank note.

“In the middle of the lounge, a jet of water, electrically lit, fell back into a basin made from a single giant clam. The delicately festooned rim of this shell, supplied by the biggest mollusk in the class Acephala, measured about six meters in circumference…” 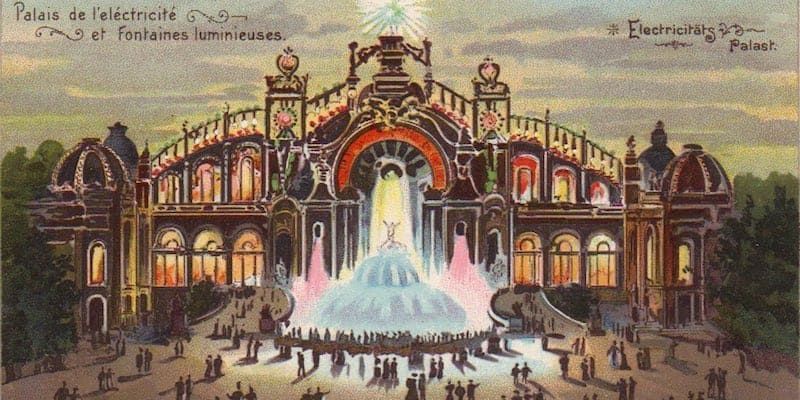 The 1867 International Exposition in Paris introduced the world to electricity – the power that could lift elevators, turn lights on in gushing crystal fountains, and send submersibles under the sea.

In another part of the world’s fair grounds, a grotto was built with an oversized saltwater aquarium that mimicked an ocean bed, complete with an erupting volcano and deep-sea divers salvaging a shipwreck surrounded by exotic underwater flora as luminescent fish swam by. How could Jules Verne not go and witness all the techno-marvels on display?

By this point, his growing literary success afforded him the opportunity to own a boat. He sailed around the British Isles and Mediterranean, keeping a journal, crammed with his observations and musings. With his brother, he spent a week in America that included a visit to the thunderous Niagara Falls, which inventors such as Nikola Tesla were eyeing as a power source for machinery.

The other notable note

“Captain Nemo fell silent and seemed lost in reverie. I regarded him with intense excitement, silently analyzing his strange facial expression. Leaning his elbow on the corner of a valuable mosaic table, he no longer saw me, he had forgotten my very presence.”

Jules Verne created four characters for 20,000 Leagues Under the Sea, using a backdrop that was the geo-global politics of the 19th century. The narrator was Professor Aronnax; his assistant was Conseil (French for advice). Ned Land was a Canadian harpooner brought along to slay a presumed ocean monster. The tragic anti-hero who intercepts them was Captain Nemo, a name rooted in Latin meaning “no one,” piloting Verne’s enterprising vision of a submarine called Nautilus. 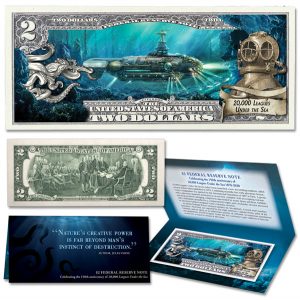 The serial began in 1869, just four months after the expo closed in Paris. By 1870 the installments were done and the book rushed to the printers. Now, 150 years later, this imaginative and thought-provoking novel has spawned numerous translations, adaptations and even Disney attractions. Littleton’s artists have exclusively designed a colorized $2 Federal Reserve Note with an informative note holder for collectors. It’s a dramatic addition to a colorized note collection, a passport to when the underwater natural world was still new, and a souvenir of the first science-fiction adventure novel.