Except for the 2004-2005 Westward Journey nickels, the reverse of our 5¢ coins has pictured Thomas Jefferson’s Virginia home since 1938. But the crude image on the nickel does not do justice to Monticello!

Italian for “little mountain,” Monticello was Jefferson’s home from 1770 until his death in 1826 (on the 50th anniversary of the Declaration of Independence, which he primarily wrote). Jefferson built his home on land he inherited from his father. And the main house sits on top of a small mountain he often explored as a boy.

Jefferson wanted Monticello to be self-sufficient. When most brick was imported from England, Jefferson molded and baked his own bricks with clay found on his property. Most of the lumber, stone and limestone used to build Monticello came from the property. And even the nails were manufactured on site. Plus, the vegetable and fruit gardens provided ample food for the estate.

A work in progress for 40 years

Monticello’s house and grounds, all designed by Jefferson, are considered architectural masterpieces. But they were the result of 40 years of doing, undoing and doing again. “Architecture is my delight,” Jefferson once wrote, “and putting up and pulling down, one of my favorite amusements.” 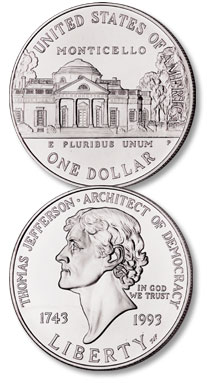 Besides his own home, Jefferson designed homes for several friends, as well as the Virginia State Capitol and the original buildings of the University of Virginia. And as secretary of state for President George Washington, he helped lay out and design the first federal buildings in Washington, D.C.

A special-issue 1993 Thomas Jefferson silver dollar celebrated the 250th anniversary of his birth in 1743. The obverse bears the inscription thomas jefferson – architect of democracy. The reverse features a much better image of Monticello than the nickel.

Jefferson began building Monticello in 1768, and it was largely finished when he replaced Ben Franklin as minister to France in 1784. During his five years in Europe, Jefferson was strongly influenced by neoclassical architects and ancient Roman buildings. So when he returned to Monticello, much of the original house was torn down to make way for bold new plans…

The “second” Monticello was twice the size of the original house. He added a large central hallway and parallel set of rooms to the first floor. A mezzanine of bedrooms on the second floor. He “topped off” his redesigned house with the first octagonal dome of its kind in the United States. The impressive structure was designed to accommodate not only Jefferson’s steady stream of houseguests, but also his vast collections of books, European art, Native American artifacts and mementos of his travels.

Monticello was also filled with ingenious devices created by Jefferson. A dial on the ceiling of the east portico provided a reading from a weather vane on the roof. A large two-sided clock above the east entrance was visible from both inside and outside of the house. The fireplace in the dining room concealed a dumbwaiter serving the wine cellar below. Jefferson’s home also contained a revolving bookstand, a copying machine and a spherical sundial. And his arrangements for lighting and ventilation were equally inventive.

In addition to architecture, Jefferson’s passions included landscaping and gardening. He took great pleasure in the rhythms of planting, growing and harvesting. And he introduced many species of vegetables, fruits and flowers to America through a lifetime of experimental farming.

Published in 1944 by the American Philosophical Society and containing over 700 pages, Jefferson’s Garden Book included his personal garden diary as well as records of plantings, soil preparation and correspondence with noted horticulturists. He discusses the relative virtues of over 40 types of beans, 38 peach varieties, 20 types of cabbage, 17 lettuce varieties and numerous species of broccoli, figs, apples and more. Monticello was an experimental botanic garden. And Jefferson loved exchanging ideas, techniques and results with amateur and professional gardeners alike. 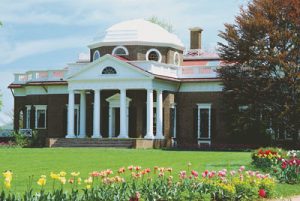 The Flower Gardens at Monticello consist of oval-shaped flower beds surrounding the house. Each plot contained a particular blossom. The oval beds are a natural extension of the building architecture. They are highlighted with shade trees, flowering trees and stunning “roundabout” walkways.

Jefferson’s vegetable garden comprised a 1,000-foot-long terrace on the southeastern side of his “little mountain.” While it supplied the family table, it also functioned as a laboratory for crop experimentation. Jefferson cultivated over 250 species of vegetables at Monticello. The main part of the vegetable garden was divided into 24 “squares” or plots. And the terraced site allowed Jefferson to extend the growing season from early spring until November. He helped popularize such farming practices as contour plowing and crop rotation.

The Fruit Garden and Orchards

Monticello’s Fruit Garden, or “Fruitery” as Jefferson called it, sprawls below the terraced vegetable garden. It includes the 400-tree South Orchard, the “Northeast” and “Southwest” vineyards, berry squares or plots and a nursery where Jefferson experimented with fruit trees. The “North Orchard” on the other side of the mountain was reserved for cider apple trees and peach trees grown from seeds. Jefferson cultivated over 170 varieties of fruit.

“The workhouse of nature”

Gardening was a welcome retreat from public life for Jefferson. He served as governor of Virginia, U.S. minister to France, secretary of state, vice president and, from 1801-1809, as U.S. president. As he sat in his study at Monticello one day, he described his view in a letter to a friend as follows: “How sublime to look down into the workhouse of nature.”

Thomas Jefferson was fascinated with the art and science of architecture, landscaping and horticulture. And over half a million people visit Monticello each year to see his vision still at work today. It’s well worth a visit to this presidential shrine near Charlottesville, VA to see how much the image on the nickel represents!